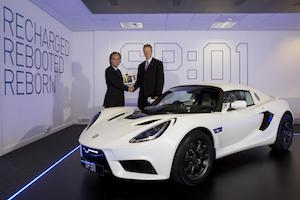 UK – The first production sports car rolled off the line at the company’s main assembly plant at Leamington Spa and was handed over to Jowett Motors (Asia), which will be shipping it to China. Detroit Electric is expanding in the region and will soon additionally announce a distributor for Japan.

Jowett, which was appointed last April, will use the first SP:01 as a demonstrator to show prospective customers; the model was previously unveiled at Auto Shanghai 2015. The company has been importing sports cars from Europe, specifically Italy and Germany, for the past 23 years.

“Jowett Motors’ desire to join us as we prepare for full-scale production and sales of our upcoming range of pure electric vehicles is a huge endorsement of our products and brand, and a demonstration of their confidence in the progress we are making in Asia and around the world,” commented Albert Lam, chairman and CEO of Detroit Electric.

The SP:01 is billed as “the world’s lightest and fastest two-seat, pure-electric sports car”, capable of achieving 0-60mph in 3.7 seconds and a top speed of 155mph. The car is powered by a 285HP/210kW electric motor and fitted with a single-speed, automatic transmission as standard; other options are a twin-speed automatic and a six-speed manual.

The body of the vehicle is made from carbon fibre panels while the lithium-ion battery has been integrated into the chassis as a stressed member, adding stiffness to improve both handling and safety. According to Detroit Electric, the lightweight, high-density battery is “the most energy-dense automotive battery pack in the world”, offering more than 140/Wh/kg.