Dassault on the senses

Delegates got together in Stuttgart, Germany in October for the annual Delmia European Customer Conference to hear, see and learn about the latest offerings in digital manufacturing

Delmia held its European Customer Conference in Stuttgart on October 6 and 7 and the event was well attended, with more than 350 delegates listening to presentations from users, attending workshops and visiting the small but fascinating exhibition which ran concurrently with the conference. Major industries represented by speakers and workshop leaders included: automotive, aerospace, mechanical engineering, electrical and electronics, fabrication and assembly, consumer goods and shipbuilding.

On the first day, delegates shared current projects and successes and heard presentations from vehicle makers and engineers from aerospace and other industries. At the end of the presentations, delegates were invited to join networking/round table discussions divided by geography and topic. Specific topics included aerospace suppliers (Saab), automotive suppliers (OEM-Suppliers and collaboration) and the benefits and justification of digital manufacturing projects. 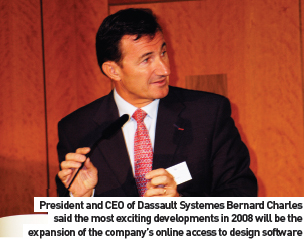 Exhibits included demonstrations of software, interactive motion control mapping programmes, and, one of the highlights, an ergonomic bodysuit worn by a demonstrator to show the analysis of body movement in various assemblytype functions.

Proceedings got under way with an introduction from Bernard Charlés, President and CEO of Dassault Systemes, who highlighted the company’s activities and customers in various sectors. One of the most exciting developments in 2008 will be the expansion of the company’s online access to design software. Charlés underlined the enormous design power that will be available to its customers’ teams who could be situated anywhere around the globe but can all log on to common software platforms and work interactively.

Philippe Charlés then outlined Delmia’s specific offerings; the division’s ‘holistic’ approach for production performance, offering one environment with single V5 desktop, collaborative digital production engineering and creation and validation tools. The area of body-in-white is seeing major developments in Delmia’s suite of products and it is working towards extending capabilities for production implementation. He also spoke of using tools such as V5R18 to produce interactive ‘loops’ to reproduce lines and enable line planning and balancing, seeking out production clashes and finding ‘dead’ areas and using them for process optimisation.

The first presentation was made by Herbert Kircher, Managing Director of IBM Germany’s Development Laboratory. He gave a fascinating insight into how the rapid pace of new technology is impacting on business. The presentation described some of the fundamental future trends in IT and their impact on all industrial sectors. He talked of emerging software, hardware, and services that are expected to significantly impact IT users in the next three to seven years. 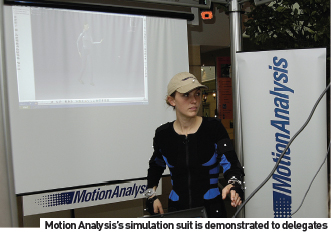 The first of the speakers representing vehicle makers was Akira Namiki, Senior Staff Engineer of Production Engineering at Honda of Japan. He spoke on the PLM strategy used by of Honda, from a manufacturing (monotsukuri) point of view.

A very interesting part of his presentation was the demonstration of the use of virtual light modelling, simulating light patterns to find shadowed areas on the line – under the vehicle during exhaust fitting in this case.

The unit develops the manufacturing process of car body parts for the globally-distributed production locations of the Volkswagen Group. The process development is conducted in cooperation with the internal and external die manufacturers of the Group. A main focus is the assurance of quality, cost and schedule targets in the early stages of process engineering.

The fulfilment of these targets demands an early digital analysis of the production process and optimisation of product designs from the manufacturing perspective.

Theilen spoke of the crucial importance of establishing new ways of organising process engineering to realise these goals.

The development project “PLM-Strategie Presswerk” strives not just for assuring the parameters of the production facility but also for assuring these parameters in an integrated digital copy of the physical manufacturing process. Theilen went on to illustrate the necessity of analysing product data concerning formability and material flow, and showed the use of several Delmia virtual production tools.

Workshops were held on day two, and these included an interesting focus on ergonomics from Maileen Zander an ergonomics engineer from Volkswagen Wolfsburg.

Her presentation, ‘Ergonomic Analysis and Evaluation of Workplaces with DELMIA V5 Human at Volkswagen’ highlighted the importance that the carmaker places on ergonomics and discussed how changing demographics have forced improvements of future assembly workstations, and how this had stimulated work with DELMIA V5 Human in the assembly planning department.

She expanded on how the different analyses are made with this tool: 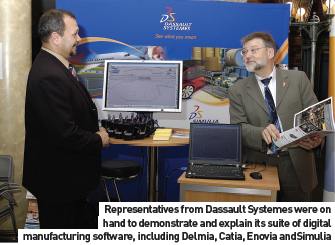 Estimates can be evaluated if planned changes bring the expected success so that applying costs can be justified.

For example, a health related improvement of the work environment can be achieved. The reuse of tools, fixtures and jigs can also be checked.

Further workshops saw presentations from Audi on a virtual body shop, digital validation of robot cells from Daimler and line balancing in wire harness production from Tier One supplier Valeo, among others.