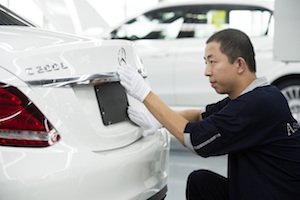 Beijing - An investment of over 11.9 billion yuan (US$1.89 billion) will be used to expand Mercedes-Benz vehicle production in the country. A BAIC production facility located in the city's Shunyi district will be transferred to Beijing Benz Automotive Co. (BBAC), which is a joint venture (JV) between Daimler and the Chinese OEM, and will be modified to house the production of Mercedes-Benz cars.

"Local production is a strong pillar of our sustainable development in China," commented Hubertus Troska, Member of the Board of Management of Daimler, and responsible for Greater China. "By deepening our cooperation with our local partner BAIC, BBAC will continue playing a key role for Mercedes-Benz in China. This production capacity expansion for BBAC will allow us to meet the expected growing demand for premium passenger cars in China, including for electric vehicles."

The plant is a fully-fledged production facility with a body, paint and press shops as well as assembly lines. It will follow the stringent quality standards and processes adopted by Mercedes-Benz at its plants across the world.

Nearly 430,000 Mercedes-Benz vehicles were produced and sold in China during 2017, accounting for over 70% of local sales. In terms of output, BBAC's existing site in the Daxing district of Beijing became the largest Mercedes-Benz production facility in the world, driven by high demand for the C-Class, E-Class, GLA and GLC models.

The news comes shortly after Daimler and BAIC announced that they would invest 5 billion yuan on the production of battery electric vehicles (BEVs) and battery localisation in Beijing. As part of this investment, the Mercedes-Benz EQC will become the OEM's first model in its EQ brand to roll off production lines by 2019.