Ceramic coatings have been used previously to retain heat within specific sub-systems or to protect components and operators from excessive temperatures but Harwell-based Zircotec is finding that today’s road vehicles are requiring more efficient methods of heat management.

Zircotec’s original customers were in the motorsport sector. “We were approached by Prodrive [which runs the Subaru World Rally Team], back in 1994,” says Technical Director Andy McCabe. “Their drivers were getting hot. We found that putting our coating on the exhaust pipe, not only under the bonnet, but running under the entire length of the car, helped lower cabin temperature by between 6 and 8°C.” From this initial application, word spread about the benefits of using coating, leading to the use of the system in touring cars and subsequently, Formula One.

Managing heat can also improve reliability. Reducing the amount of heat escaping from the powertrain increases the durability and effectiveness of engine and transmission oils, it can improve engine cooling and help protect ancillaries such as regulators, wiring and ignition systems from the degrading affects of excessive heat. And the effect of coating exhausts extends beyond simply protecting heat-sensitive components. Ensuring that thermal energy stays where it is helps engines perform in the way they were designed to. Retaining heat energy in the exhaust system means that the gases within the exhaust move faster, reducing backpressure on cylinders and helping to increase engine efficiency. 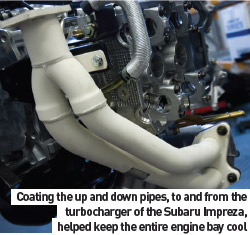 Protecting air intakes from locally generated heat also means the engine receives denser, more oxygen-rich air, helping to boost performance further. A 5°C drop in air intake temperature will tend to boost power output by around one per cent. The 30°C reductions seen by customers mean that six per cent rises in horsepower are possible.

When Litchfield decided to create its own version of the Subaru Impreza, performance and an OE appearance were two goals they wanted to achieve. Litchfield found that coating the up and down pipes, to and from the turbocharger, helped keep the entire engine bay cool.

An added benefit was that more of the energy in the hot exhaust gases leaving the engine reaches the turbo, rather than being radiated away from the up pipe. “The more heat you can keep in the system, the faster the turbo will spool up, making the car more responsive,” says Managing Director Iain Litchfield. “We’re finding it’s bringing the turbo up to speed 300 or 400 rpm sooner, which you can really feel in the crispness of the throttle response.”

Many of the benefits derive not just from the thermal insulation properties of zirconia-based coating, but also from the application method the company developed. Rather than being painted on, the firm ionizes the ceramic in a high powered electric arc so that fine, molten particles can be sprayed onto a surface. The result is a coating that adheres much more effectively to the parts being sprayed than the wraps and paints used in the past. In order to create a highly resilient coating, all parts are first degreased and shot blasted to provide a clean and predictable surface to spray on. A nickel-based coat is plasma-sprayed to give a rough surface so that the ceramic coating itself can adhere as firmly as possible. In addition this bond coat also minimises the thermal mismatch between substrate and ceramic coating.

The final result is a highly uniform coating of between 300 and 350 microns thickness, with around a third of that made up by the undercoat. The effect on the component’s weight is an additional 1.6kg per square metre.

The current spraying process is labour intensive and requires complex extraction and strict health and safety controls for the operators. With the expansion into OE road car and commercial vehicle markets, the firm has commissioned a new robotized spray booth that will come on stream later this year.

With OEMs clearly in mind, the company is developing new derivatives including different surface finishes and colours. With several concept cars using ceramic coating as an alternative to some traditional brightwork, one could expect that the technology may well find further uses in the near future.