Solutions that cover and facilitate whole product lifecycle processes are growing in importance, and the main driver is visualisation technology. 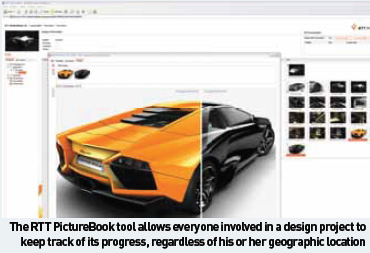 A high level of visual quality is important in each and every part of the process chain. Simulating a product in all aspects before you build it allows integrated decisions and smoother workflows. Other benefits include the establishment of rapid, efficient and highly flexible processes for product development, design, manufacturing, marketing and sales. This allows traditional product development cycles to be considerably simplified and accelerated. Virtual prototypes instead of costly physical prototypes in industrial development processes save companies time as well as money.

So who is creating this technology and how does it work?

This statement is supported when examining RTT’s recent developments in the field of global illumination and physically correct light visualisation, both based on stateof- the-art ray tracing.

However, data quantity is an impediment that has a huge impact on the performance of displays, and for this reason, RTT integrates DG Scale technology into the latest version of its visualisation software, RTT DeltaGen. This scalable solution allows optical effects in the RTT RealTrace module to be displayed even faster in real time. These operations are distributed intelligently via the new multi-GPU support feature that optimises the use of available graphics cards. 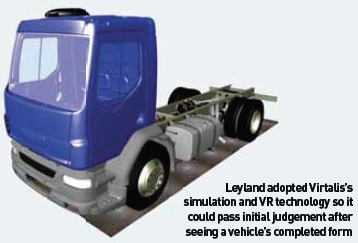 “As our ray-tracing technology utilises the highperformance processors of modern graphics cards rather than the CPU, the high volumes of computational operations required for ray tracing – done by RTT RealTrace – can be processed very quickly,” says Karrasch.

In light of increasing project complexity, user-friendly data management tools are becoming another important factor. Design projects are multi-tiered and involve an increasing number of employees and departments, often stretching across the globe. To ensure that everyone involved can keep track of a project’s status and progress, automotive companies are also using visual assetmanagement tools such as RTT PictureBook.

One company to put its trust in virtual reality recently is Leyland Trucks, where DAF LF and Foden trucks rolling off the production line have been designed entirely with the use of advanced simulation and VR from Virtalis.

“We were using PTC’s ProEngineer, but we needed to do more than just model,” says Ian Cure, Leyland’s CAD System Manager. “We wanted to see a whole vehicle on the screen, and be able to move around it to discuss particular design and production issues, as we would have done using the traditional physical mock-up approach.”

Since the adoption of Virtalis technology, Paccar, which owns Leyland, has followed suit and replicated the Virtalis solution at its American headquarters.

Providing customers with a truck to match their particular requirements has led to Leyland having a very complex bill of materials. Trucks are tailored for different operating conditions; a seven-tonne vehicle, for example, can have a choice of six different wheelbases, two different engines, four different gearboxes and 300 rear axle ratios Using VR to link Leyland’s designers with its manufacturing engineers has helped to cut both design rework and timeto- market.

“With Virtalis’s help we were able to build up the entire manufacturing process stage by stage,” says Doug Holmes, Lead Engineer of Leyland’s configuration group. “They installed a passive stereo system that allowed us to carry out design reviews with our manufacturing colleagues weekly.”

As an additional advantage, two days before the new truck variants were scheduled to go down the production line, workers from the shop floor were shown the model and taken through the 40-stage manufacturing process. This familiarised them with the new parts and their new roles in a single session.

Another company to benefit recently from Virtalis technology is Elasis, a scientific and technical network within the Fiat Group. The company is pioneering the use of virtual reality to develop new vehicles and to support product innovation. In fact, Metodologie Sviluppo Prodotto (MSP), a department of Elasis, has been researching the capability of VR for the past five years.

This multi-disciplinary group successfully introduced digital mock-up techniques and has deep knowledge of both the engineering processes used in the development of the car design and the information tools and techniques required.

The Virtalis team, headed by Andrew Connell, worked with Elasis on the design and implementation of the first phase of the project, which included a parametric car in which all the physical relationships between the various objects could be electronically controlled. This was linked to a VR system, so that the driver is immersed in a virtual world via a headset, but can touch the proposed controls and seat of the virtual car. Linking the real to the virtual in this way is no mean technological feat. The spatial relationship between the real and the virtual must be kept constant, if it is to be believable, but the car is intended for use by people of all sizes, so the accurate tracking system must be quick to reconfigure.

“The real-time data fed from the tracking g system into the headset must be spot on,” says Cornell. “However, trackers generally perform badly in metallic environments, like cars, so we had to be very careful, especially bearing in mind we needed to tag on a host of other peripherals, such as ‘cybergloves’. If the system isn’t accurate, then the brain won’t be fooled into believing that what it is seeing is real, and the system’s raison d’etre will be lost.”

“The speed with which our parametric car can be transformed is important for us,” adds Gennaro Monacelli, Manager of the MSP department.

“Currently, altering the distance ratios of the various elements takes only a few seconds and altering the physical seats and steering wheels takes about an hour. This means our management team can easily check out different configurations early in the design process without much time commitment. Such comparisons are simply not possible with a wholly physical model. Likewise, CAD does not allow you to truly feel the car, yet with this system we can take CAD data and create a VR model ready for its first ergonomic evaluation in just half an hour.

“Beyond this application, the protocols we have developed are being fed into Fiat’s Virtual Reality Network, which will ultimately encompass all of the group’s activities in a co-operative working environment,” he says. “VR will become the standard workstation for an engineer, just as CAD systems began to be about 15 years ago.”

Visualisation software in the production environment is being used by OEMs, a change occurring simultaneously with product development, rather than subsequently. For those fortunate enough to start with a blank canvas, the rewards for basing factory planning on the use of visualisation technology can be significant. A case in point is Eicher Engineering Solutions (EES), a unit of VE Commercial Vehicles, itself a significant player in India’s automotive industry.

EES is a consultancy divided into four practice areas: design, analysis, testing and digital manufacturing solution services. This latter discipline is under the direction of Sachin Sanghi, who offers scientific plant design and optimisation practices to companies that are still using 2D factory planning methods. For the most part, Sanghi uses the Tecnomatix digital manufacturing solution from Siemens PLM Software as his group’s software foundation.

“The factories I create virtually contain all the data about layout, material handling devices, racks, machines and more,” he says. “I take an inventory not by physically counting, but by asking the software for a report. This is a huge contrast to how internal groups handle their factory data, and it demonstrates a clear advantage of this approach.

In a job for a sister company, Eicher Engineering Components, a global Tier One gear manufacturer in India, EES’s Digital Manufacturing Solutions team was called in to advise on a three-fold expansion of capacity. The company had already done some planning when Sanghi’s group got involved and had determined that the expansion would need to use most of the available land.

Using FactoryCAD, Sanghi was able to design the expansion in such a way that they could increase capacity fivefold without using additional land. Because he had created a 3D virtual factory in FactoryCAD, one of the options that Sanghi noticed right away was that a number of non-value-added activities could be moved to the mezzanine of the existing facility.

“This is the sort of thing that becomes very clear when you have a third dimension to work in,” he says. “Even the customer started contributing ideas once he saw the layout in 3D.” Sanghi made a number of other changes as well, increasing overall space utilisation by 33 per cent. In addition, he used FactoryFLOW to reduce material flow in the facility by 26 per cent. 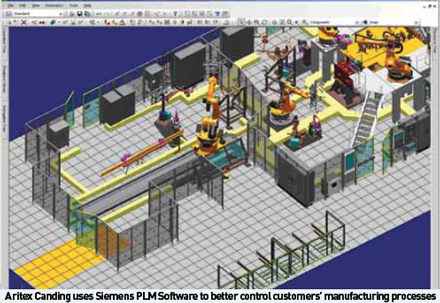 Another beneficiary of Tecnomatix is Aritex Canding, which has been supplying turnkey robotic assembly systems in the automotive sector for more than 40 years. The company’s involvement spans the entire process, from the beginning of development to the completion of production lines, including, for example, the design of tools, manufacturing and assembly processes. In recent years, the company has implemented the Tecnomatix Process Designer, Robcad and Plant Simulation solutions from Siemens PLM Software to better design and control customers’ manufacturing processes.

The creation of robotic welding lines for an automotive OEM offers a good example of how Aritex Canding uses the Siemens software. In the early stage of a project, when a new vehicle is in development, the supplier can begin defining the manufacturing processes at a conceptual level. Aritex Canding, working from data provided by the OEM, imports work operations into Process Designer, where they are broken down into sub-operations to enable more detailed analysis for production sequencing and cycle-time analysis.

Once the operations are defined and sequenced at conceptual level, the processes most at risk are simulated using Plant Simulation, a discrete event simulation tool.

These simulations are used to validate that the process will meet the requirements as defined by the OEM based on various factors including cycle time, number of resources, machine uptime and maintenance schedules. Based on these results, and a tight integration with Process Designer, each operation is then fine-tuned until the process design succeeds in meeting all the customer’s requirements.

Using Process Designer, it is possible at any time during the design stage to visualise a 3D representation and detect possible problems, such as collisions and inaccessible components. Once a work solution is validated, the 2D layout can be created using Microstation to verify that the installation fits within the physical space allotted by the OEM.

It is also possible to export the 3D information generated with Process Designer to Robcad, where detailed simulations of all robotic processes can be validated. This makes it possible to verify the accessibility of weld guns, grippers and other end effectors, to distribute weld points and to allocate resources efficiently. Furthermore, the final process is geometrically validated, the cycle time is checked and the final position of the major components is pinpointed on the layout.

It is abundantly clear that high-end visualisation solutions have carved themselves a niche that is distinct from the traditional CAD market. This is resulting in an increasing demarcation of market sectors, and for this reason, analyst firm Jon Peddie forecasts growth in the digital content creation segment to €4.3 billion by 2012.