The main alternative to steel is becoming more popular with vehicle-makers for its lightweighting potential but there are challenges in its wider use, including the need to secure a steady supply of recycled content 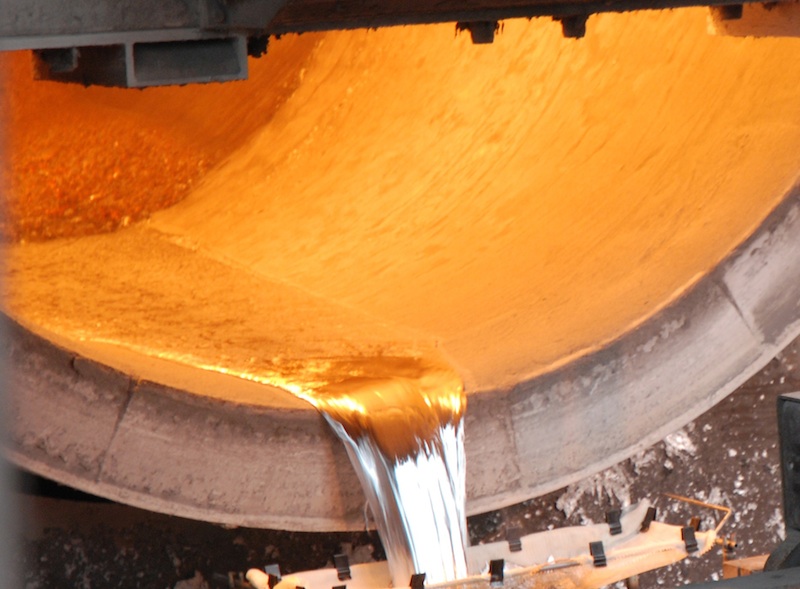 The use of aluminium in automotive applications is poised to explode over the next five to ten years. Global producer Constellium estimates that the US market for aluminium rolled products to be used in body-in-white (BIW) could grow from fewer than 100kt in 2012 to approximately 1Mt in 2020. In Europe, the BIW market is expected to grow by approximately 12% a year to more than 600kt in 2020. In North America, demand for aluminium body sheet will almost quadruple to 1.8Mt in the decade through to 2025, according to another major manufacturer, Alcoa.

This increase in demand is being driven by the global introduction of increasingly stringent legislation regarding fuel economy and CO2 emissions. Aluminium can be up to 50% lighter than steel. Volkswagen estimates that a weight reduction of 100kg equates to a reduction in a vehicle’s CO2 emissions of 3.5g.km–1. With further optimisations to the drivetrain, this could rise to 8.5g.km–1.

However, the potential to make vehicles lighter is not the only environmentally friendly credential presented by aluminium; it is also a highly recyclable material. Indeed, approximately 75% of the aluminium ever produced is still in use in some form today.

This is significant for a number of reasons. Firstly, EU directives stipulate that 85% by weight of end-of-life vehicles (ELVs) must be reused or recycled, with a total material recovery rate of 95%. Secondly, it gives the metal a further edge over its lightweight competitors such as carbon-fibre reinforced plastic (CFRP), which is expensive and requires relatively complicated recycling methods, apart from grinding. Thirdly, the production of recycled aluminium consumes only 5% of the energy needed to produce primary aluminium with the same properties, significantly reducing the cost of using the material.

So recycling aluminium is beneficial both for the environment and for OEMs’ bottom lines. However, there are a number of complicating factors surrounding the use of recycled aluminium in automotive applications in both the short and the long term.

Being strategic about supply 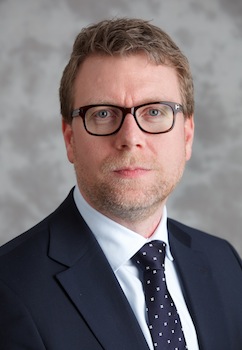 Chief among these short-term problems is supply. Catherine Athènes, Constellium’s sustainability council leader and marketing director, packaging and automotive rolled products, says: “The pool of end-of-life aluminium scrap is limited in terms of its quantity today because it would have been produced some years ago, and a lot of it is still in use. So the danger of a company saying that it wants to increase the recycled aluminium content in its product is that it will be diverting that material from another application, which is not going to improve anything in terms of the environment.”

The executive vice-president of rolled products at Hydro, Kjetil Ebbesberg, agrees: “The quest for recycled-content metal in cars runs the risk of developing inefficient material flows. If carmakers ate up the actual global base of recycled aluminium, this would happen at the expense of other users and at ecological disadvantages for the overall footprint.”

For example, makers of tins or façade elements with specific alloys would be hindered in the use of recycled metals in their products, while transporting and alloying these materials for automotive aluminium touted as containing recycled content would result in higher C02 emissions than if they were repurposed in their original industries. Ebbesberg continues: “That kind of practice bears a risk of ‘green-washing’ complaints from those other industry sectors, from environmental NGOs [non-governmental organisations] and ultimately from critical customers.”

Cleaning up after processing
OEMs and their suppliers must therefore focus on ‘closing the loop’ by recycling their own process scrap. They also need to develop efficient sorting and re-melting technologies for recycling the scrap recovered from ELVs. Currently, the majority of aluminium scrap from ELVs is processed into casting alloys used to produce engine blocks, cylinder heads and gearboxes. In the case of wrought alloys, this is effectively downcycling the material.

Wrought alloys have a low tolerance to any impurities present in the aluminium scrap, owing to inefficient separation processes. As a result, these impurities need to be diluted with the addition of virgin wrought aluminium in order to produce a new wrought alloy.

The establishment of closed-loop recycling programmes requires sizable investment, but the long-term advantages of these systems – both financial and ecological – are significant. In 2002, Ford and Alcan set up the first closed-loop recycling programme for aluminium sheet scrap in North America. For its part, Ford had to spend $400,000 to modify its scrap segregation system to yield clean aluminium scrap. As a result, offcuts from the carmaker’s stamping plant in Chicago could be sent back to Alcan to be re-converted into aluminium sheet.

These offcuts would otherwise have been sold onto the general scrap market, where they would have been mixed with other metals, diminishing both their quality and value, and making them unsuitable for re-use in automotive body applications. Instead, the two companies gained access to a regular source of a comparatively cheap material.

Ford’s vice-president of purchasing at the time, Tony Brown, said: “This is a win-win proposition for both Ford Motor Co and Alcan, and very well could serve as a model for future aluminium recycling efforts for the automotive industry.”

Productive partnerships
More than a decade later, it appears that Brown’s prediction was accurate. Ford has set up a variety of closed-loop programmes with its partners to recycle the scrap from the production of its aluminium-intensive F-150. Alcoa is one such partner. The company’s chief sustainability officer and vice-president, environment, health and safety, Kevin McKnight, says: “Collaboration is the key to establishing closed-loop recycling systems. We work closely with all of our customers to develop innovative ways to preserve the value of the materials by alloy type and create scrap-handling logistics systems to efficiently get the materials back to us. In some cases, we have designed specialised equipment to maximise the amount of materials that can be carried on a truck and minimise the number of trucks needed to close the loop.”

Other companies have followed Ford’s lead. UK-based aluminium pioneer Jaguar Land Rover (JLR) has put a closed-loop recycling programme in place at its Jaguar production centre in Castle Bromwich, and a trial process is being implemented at its plant in Solihull, where the all-aluminium Range Rover and Range Rover Sport are being manufactured. Halewood, where the Land Rover Discovery is produced, will also become a fully closed-loop facility in the next 12 months.

Furthermore, JLR has put a programme in place to encourage its tier one stamping suppliers to adopt the same philosophy. By 2020, the company – with Novelis and its other partners – plans to employ 75% recycled metal in every vehicle it makes.

Together with Novelis, JLR has developed RC 5754, which contains up to 50%-by-weight scrap recycled from its in-house processes. JLR had to invest in new equipment and train its operators in order to ensure that clean, segregated scrap was received at Novelis’ cast-house.

Despite these precautions, RC 5754 does not possess exactly the same properties as the virgin material used to produce it. The iron content of RC 5754 is a little higher as a result of using secondary material. This means that JLR had to do a lot of work to evaluate the material's properties and to design around the differences. RC 5754 will become the default grade on all of JLR’s forthcoming vehicles, including the Range Rover and the Jaguar XE, and will replace its NG 5754 grade. The OEM will also introduce this recycled alloy retrospectively into its current models. 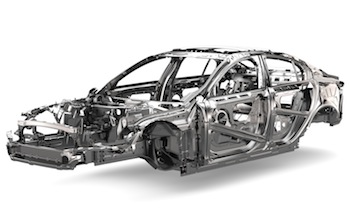 Since 2011, Novelis has invested approximately $500m to expand the size of its recycling network, doubling its recycling capacity to 2.1Mt per year and raising the recycled content in its products from 30% to 46%. Much of this scrap comes from the automotive sector. The company's goal is to sell products that contain 80% recycled content by 2020.

In October 2014, Novelis opened the world’s largest aluminium recycling centre. Located next to the company's rolling mill in Nachterstedt, Germany, the $258m facility can process up to 400kt of aluminium scrap annually, turning it into high-value aluminium ingots to feed the company’s European manufacturing network.

A contrasting approach
Constellium is going down a different route. The company is not investing heavily in recycling capacity and currently has only one automotive-specific recycling facility, in the Czech Republic. Rather, it is preparing technology and processes that will help it to deal with the deluge of aluminium-intensive ELVs predicted in the decades to come.

Hydro’s Ebbesberg says: “When the upcoming ‘alu-boomer generation’ cars reach the end of their use phase, the scrap base for aluminium will increase accordingly. Thus, and only from then on, there should be more scrap available in the market relative to new product demand.” 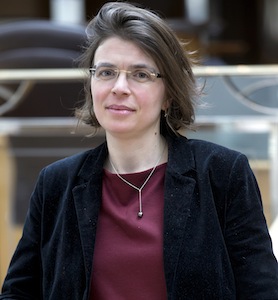 “We think that the solution is not necessarily to recycle everything ourselves, but to create the right partnerships and to manage the flow of the scrap,” says Constellium’s Athènes. “Our expertise is in the metallurgical properties of the scrap and the properties we need to reach at the end of the recycling process. We are constantly improving this expertise through our research and development work.”

Currently, most ELVs are crushed and shredded at the scrapyard without any pre-sorting. Some easy-to-recover aluminium parts are removed during the initial dismantling process; the car body, including the remaining aluminium, is then fed into a shredder, where it is broken down using a hammer mill. Separating the ferrous fraction of the detritus with magnets and removing the shredder residue with a cyclone gives a mixture of plastics, rubber, glass, textiles, high-grade steel and nonferrous metals.

"What we have to do is prepare for the future so that when the aluminium comes back as scrap, it goes back into the body of the vehicle, instead of going into engine blocks” – Catherine Athènes, ConstelliumEbbesberg continues: “It is difficult and expensive to separate various alloys from each other after the car has been shredded into pieces. It would enable the use of much more recycled aluminium in cars if the sorting process was done more efficiently.” The mixed fraction is subjected to sink-float and eddy current separation, leading to the extraction of aluminium scrap, but this still leaves a mixture of wrought and cast grades requiring further sorting.

Laser-induced breakdown spectroscopy is one of the few high-speed, high-volume methods capable of separating both cast and wrought aluminium scraps into their individual alloy families. Using this method, a sensor detects a piece of scrap material and this activates a pulse laser. The laser strikes the surface of the metal and produces an atomic emission, which is monitored with a computer system. The system can then direct the piece of scrap to an appropriate bin using a mechanical arm.

However, the pulse lasers can only penetrate a small distance into the surface of the metal, meaning that the scrap must be free of paint, lubricants and other coatings for the system to work. Furthermore, oxide formation on the surface of the scrap can lead to false readings. 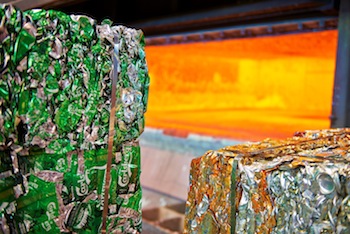 OEMs could help to ease these problems by keeping recycling in mind when designing their vehicles – choosing standard alloys based on the common alloying elements for the production of parts and minimising the number of materials/alloys in a part.

The use of recycled aluminium presents a number of intriguing possibilities to OEMs and their suppliers, but it needs to be done in the right way.

Athènes offers some sensible advice for the future: “In the next five to ten years, there will still be a need for primary metal in automotive body sheet; we will not grow the automotive business with recycled scrap from ELVs alone. What we have to do is prepare for the future so that when the aluminium comes back as scrap, it goes back into the body of the vehicle, instead of going into engine blocks.”