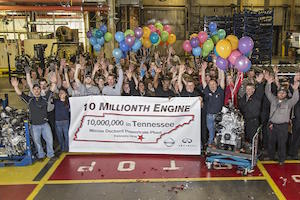 US – The milestone engine was a 2.5-litre, four-cylinder unit for installation in a Nissan Altima scheduled for assembly at Nissan Smyrna, also in Tennessee. The OEM started making engines at Decherd in 1997.

“Producing 10m engines is a big number for any plant, but hitting this milestone in less than 19 years is a real testament to the strength and dedication of our workforce,” said Gary Edwards, vice-president of Nissan's US Powertrain Operations and Battery Plant.

The QR four-cylinder engine is the highest-volume unit built at Decherd, powering both the Altima and the Rogue crossover – the two top-selling Nissan models in America. The plant’s 1,600-strong workforce also makes four-, six- and eight-cylinder engines, plus eMotors, for the Nissan and Infiniti vehicles produced in the US.

Last year, Nissan Decherd produced 964,000 engines, including eMotors – a significant improvement on the 162,000 made in 1998, its first full year of production. Decherd also has facilities for crankshaft forging and cylinder-block casting.