GM's energy efficiency to save $73m 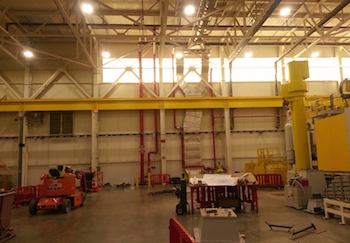 US – The vehicle-maker estimates that it will make this saving in 2016 through sustainability measures including the installation of 186,000 light-emitting diode (LED) bulbs and fixtures. GM is aiming to use renewable energy to meet 100% of its electrical needs worldwide by 2050.

“Energy efficiency can reduce electricity loads, which will help us more easily transition to renewable energy sources,” said Al Hildreth, global energy manager at GM. “Together, these environmental improvements help us reduce our carbon footprint, cut costs and deliver value back to our customers.”

In total, 16 GM facilities have been recognised for their energy-efficiency efforts, including the plants at Lansing Delta Township, Michigan, and Fort Wayne, Indiana, which have attained Energy Star certification. The US Government’s Environmental Protection Agency (EPA) designated these factories as more energy efficient than 75% of similar buildings nationwide. At Lansing, new doors have been installed to isolate airflow in the paintshop. Fort Wayne now has variable-frequency drives which increase the precision of cooling-tower pump systems and fans; the plant will receive nearly $1m in utility incentives as a result. Both sites use LED lighting in their new facilities.

This year, 12 GM locations also completed the ‘Challenge for Industry’ Energy Star programme, two of them for the first time. Grand Rapids in Michigan achieved an 18% reduction in energy intensity by replacing 11,000 lights with LED tubes, enhancing its energy management systems and installing new variable-frequency drives on heating and cooling equipment. Bedford achieved a 12% reduction by installing high-efficiency burner controls on its melting furnaces and monitoring the energy use of equipment in real time.