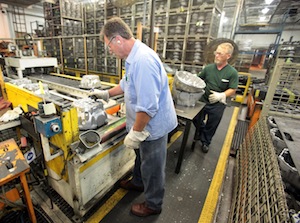 US – The facility in Indiana has become the 11th North American location to be recognised in this way – and the first involved in die casting. Kokomo also joins two transmission plants in Indiana which were given Bronze status last year.

Kokomo Casting underwent a two-day audit, during which it earned at least 50 points in each of the ten technical and ten managerial ‘pillars’ which make up the World Class Manufacturing (WCM) system adopted by Fiat in 2006 and the Chrysler Group in 2009, following the merger between the two companies. The audit was performed by a representative of the central staff of the WCM Development Center for Europe, the Middle East and Africa, plus the plant manager of VM Motori in Italy.

“It is appropriate that this honour comes as Kokomo Casting marks 50 years in operation because it recognises the commitment of our workforce to building on the plant’s history and creating a global path for future success,” said Brian Harlow, vice-president – Manufacturing, FCA North America.

Kokomo Casting is one of five FCA facilities in Indiana and employs nearly 1,300 individuals. The plant uses almost 1m pounds of metal each day to cast aluminium parts including transmission and transaxle cases, and engine blocks. In particular, it supports the production of eight- and nine-speed transmissions for vehicles such as the Jeep Cherokee and Chrysler 200.