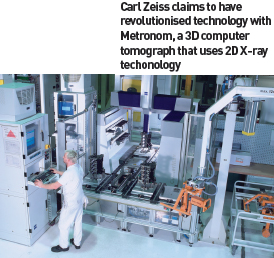 Carl Zeiss Industrielle Messtechnik claims it has revolutionised measurement technology with Metronom, a 3D computer tomograph that uses 2D X-ray technology. The device, which halves the time required for the initial design of plastic and aluminium diecast parts, was on show at the VDMA Fachverband Präzisionswerkzeuge (German Engineering Federation Association for Precision Tools) stand at EMO 2007. Materials such as plastics, light metal alloys, and model building materials such as plaster, wood, resin, ceramics, and steel can all be tomographed and checked quickly and accurately.

As a 2D image generated using X-ray technology only allows visual checks in the form of a cross-section, the metrotomography process is used to rotate the part 360 degrees around its axis, thereby building a complete 3D image of the volume. This even enables the operator to accurately depict and test complex interior geometries (such as that of a ski boot). As the operator stands outside the machine, which is radiation proof, the radiation poses no risk to his or her health.