One of the major restrictions to the increased use of aluminium and magnesium alloy components in automotive applications is their relatively high cost compared to similar components made from steel or cast iron. This restriction acts as a considerable barrier to achieving the full weight-saving potential that could be realised if the cost differential could be eroded

At Brunel University in London, the BCAST (Brunel University Centre for Advanced Solidification Technology) group has developed a process for conditioning molten metal which could result in significantly lower cost components, compared to those produced by conventional casting methods. The new process is called MCAST: melt conditioning by advanced shear technology. This article introduces the many commercial applications for MCAST.

The key to lower-cost components
The major challenge is to develop solidification technologies which provide a fine and uniform microstructure, a uniform chemistry and a reduction or perhaps elimination of defects, such as porosity and cracks, in the as-cast condition. This would mean that cast components could be used in more demanding applications, and that feedstock billet and slabs could be processed with minimal use of capital intensive equipment like rolling mills or extrusion presses.

Work on nucleation control at Brunel University has resulted in a new melt conditioning technology that can deliver an extensive range of alloys as processed melts to a wide variety of casting equipment. The novel melt conditioning technology is provided by a twin-screw melt conditioner which has a pair of co-rotating, fully intermeshing and self-wiping screws rotating inside a barrel. The screws have specially designed profiles to achieve both a high shear rate and a high intensity of turbulence. A schematic diagram of the main components of a twin-screw melt conditioner is shown in Figure 1. During conditioning, the melt is subjected to unique dynamic conditions at a uniform and precisely controlled temperature. Within a few seconds, this provides a melt of uniform chemistry containing well-dispersed nucleation agents of a narrow size range.

Solidification of this type of conditioned melt results in a fine and uniform cast microstructure with a uniform chemical composition throughout the entire casting (either components, billets, blocks or strip), and reduced casting defects. This means that there are substantial improvements in as-cast mechanical properties and additional benefits in terms of improved corrosion resistance and tolerance to the use of recycled metal.

The high shear rate and high degree of turbulence inside the melt conditioner potentially delivers the following extra benefits. Conditioned melts can be made of alloys that cannot be conventionally melted and cast and are usually made by either a powder metallurgy route or spray casting. This means that alloys can be made with much higher levels of additions like iron and silicon and that high levels of particulates can be incorporated into the melt to make novel composite materials.

Recently, several hundred castings have been made from conditioned melts of AZ91D, LM25 and LM24. The cast components were sectioned and the resulting microstructures from different regions of the casting, the biscuit and the runner were analysed. Unlike a conventional high-pressure diecasting, the microstructure was consistent from region to region, independent of position or thickness.

During the MC-TRC process, liquid metal is continuously fed into the twin-screw melt conditioning device, where the liquid metal is sheared under a high shear rate and with a high degree of turbulence at a temperature either above or below the liquidus of the alloy. The residence time of the alloy melt inside the twin-screw device is typically 20 seconds, depending on a combination of the screw profile and the rotation speed. The conditioned melt is fed continuously from the twin-screw melt conditioning device into the twin-roll caster for strip production A small experimental twin-roll caster has been set up and fed with both conventional and conditioned melts of a range of magnesium alloys (AZ31, AZ61 and AZ91) and a conventional melt of aluminium alloy AA5754. The first MC-TRC experiments, using a conditioned melt of AZ91, have produced strip with a microstructure that is uniform across the whole width of the 4mm sample cross section as shown in Figure 3 (below). This is very different to the banded and segregated microstructure developed after conventional roll casting of magnesium alloys.

The equivalent process to MC-TRC for the production of extruded sections is rheoextrusion (MC-RC). The equipment consists of a continuous twin-screw melt conditioning device and a counter-rotating twin-screw extruder. Liquid metal is continuously fed into the twinscrew melt conditioning device and is converted into a semisolid slurry, usually with high solid fraction. 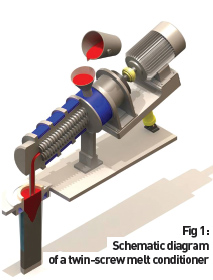 The conditioned semi-solid metal is then continuously fed into the counter-rotating twin-screw extruder for the production of extruded profiles through a speciallydesigned extrusion die. In the rheoextrusion process, metals are shaped in their semi-solid state, with little extrusion force required, unlike the conventional solid state extrusion route, where large extrusion forces are usually required. Preliminary work has been carried out using magnesium alloys. The microstructure is refined compared to conventional extrusion of this alloy and is isotropic. The mechanical properties are significantly improved compared to the alloy processed by the conventional route of billet production and high-pressure extrusion.

Melt conditioning and direct chill casting (MC-DCC)
The MC-DCC process is another casting technology developed by BCAST for production of high-quality billets and slabs. The MC-DCC equipment has two basic functional units: a continuous twin-screw melt conditioning device and a conventional DC caster. The micro-structure and composition of the MC-DCC billet is extremely uniform over the entire cross section of the billet in contrast to the typical three-zone structure (chill zone, columnar zone and equiaxed zone) observed in the conventional DCC billet of this alloy. Their micro-structural refinement and uniformity means that MC-DCC billets or slabs require much less time for homogenisation or may not even require formal homogenisation. A further advantage is that MC-DCC block and billet products will require less solid state deformation processing for the production of similar final products. 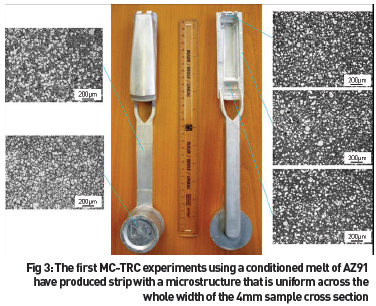 trials have shown that an additional 0.7 wt% of iron can be tolerated by LM24 and 0.37% wt% by LM25. Effectively, the cast alloys have the same mechanical properties as the conventionally cast alloys with a lower iron content.

Recently AZ91D has been MC-HPDC-processed using primary metal and then using 50 per cent and 100 per cent process scrap from earlier casts. This metal was used without any refinement. The resulting mechanical properties of the castings were independent of the amount of recycled scrap used and all the as-cast tensile bars had similar mechanical properties.

Work on melt conditioning at Brunel University has provided a new process for feeding aluminium and magnesium alloys into a wide range of equipment to provide castings that are essentially free of defects and macrosegregation, and with refined microstructures. The mechanical properties of such castings, both as-cast and in the wrought condition, are generally superior to those obtained by conventional melt processing and casting. Also, the melt conditioning process allows alloys that are difficult or impossible to cast conventionally to be readily cast for the first time. Increased tolerance of impurities is a significant benefit of the process, as this will facilitate recycling and provide a wide range of lower-cost lightweight parts for automotive applications. www.innovaltec.com