Automotive robots reach for the sky

Airbus has completed a major research project that has brought automotive robots up to aerospace tolerances – a process that incorporates Delmia V5R16 Robotics software and should reduce costs, cut production time and improve quality.

Company-wide, we drill around 50 million holes per year and half of these are manually processed,” says Mark Summers, Engineering Group leader, Automation and Robotics at Airbus UK. “Our research is part of a drive to significantly reduce manual processing across current and future aircraft programs as our build rate increases to meet market demand. Standard industrial robots are not accurate enough for our process specifications, as absolute accuracy of ±0.2 mm is required in many application areas. Our team has brought together two developmental partners, Kuka UK and M3, to address this problem and we believe we have come up with a winning solution which could bring a low cost, flexible robotic platform into the aerospace sector.”

M3 is a Metris metrology integrator, and a Delmia UK Service Partner. The new Airbus process links a Metris system to the Kuka robot dynamically, on-line. All of the robot programs being created off-line use the Delmia V5 Robotics simulation solution. 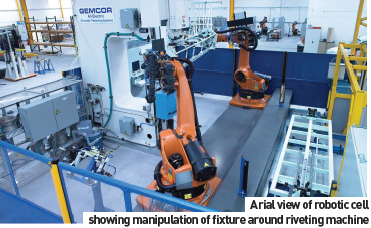 This isn’t the first time Kuka and Delmia have worked together. Under the aegis of DaimlerChrysler, experts from the two companies created a second-generation solution called “Realistic Robot Simulation” (RRS2). To a graphical environment provided by Delmia, Kuka connects real-time information on the movements of its own virtual robotic manipulator (VRC). This achieves a significantly higher level of simulation prove-out and integration into real robots.

The Airbus project takes advantage of this solution, with the final full syntax programs being run on the Kuka VRC, which is graphically driving the Delmia simulation enabling accurate cycle-times and clash detection to be made.

Roger Holden, Managing Director of M3, the company with joint commercial rights to this solution (with Kuka UK), explains: “This project has been a real partnership, between Airbus, Kuka, Metris, Delmia and ourselves. All parties agreed that because the part programs are so large, and the accuracy requirements so high, an offline programming solution was needed. Delmia’s V5 and Kuka’s VRC provide an excellent solution. Linking this with our metrology interface and integration means the robot is consistently running programs, accurately, referenced back to the CAD master dynamically on-site. We now have the order for the first production system to be put into action at Airbus, and are now going live with the product at Filton, UK.”

Airbus is a leading manufacturer of airliners with more than 100 seats. The company’s product line-up covers a range of 12 aircraft models from a 100-seat single-aisle, to the largest civil airliner ever, the double-deck A380. In 2006, Airbus achieved a turnover of approximately ¤26 billion ($35 billion). It has delivered more than 4,500 Airbus aircraft to 250 customers around the globe. To date, Airbus has received orders for more than 7,100 aircraft. Information about Airbus at: www.airbus.com

The unique and fully integrated metrology system from Metris measures the virtual world first and adapts the real world to fit. This intuitive system is called Adaptive Control by the team because it makes the robot intelligent enough to make its own adaptations. This means that it can make accurate allowances for temperature fluctuations, for example. The system makes the robot aware of deflections by measuring the relative positions of the target and the robot as it moves towards it.

The robot is then able to co-ordinate that data and make the necessary compensations.

Mark Summers comments: “Although the project appears complicated, we have kept it as simple as possible. Intricate software interfaces have been avoided and standard components utilised throughout the system to ensure a straightforward operator interface. Now that we have finished the first phase, we see extensive possibilities for future applications which could increase efficiency and reduce costs.”

Not only can the robot or robots carry out tasks at great positional accuracy and faster than a person, but they could be used for a range of tasks, such as sealant application, component handling, fastening and machining. Such robotic platforms could become truly multi-functional. The multifunctionality is generally agreed to be key for the aerospace industry, as single process automation tools are often underutilised owing to the long cycle times for each part. Another benefit is that the system, in effect, becomes an online DMM, certifying jigs and products in real time. There is potential to re-certify jigs without taking them out of production at regular intervals; instead, geometry changes in the jig could be identified in the real time production environment. Similarly, it could become unnecessary to divert products to a lab for QA, as the robot could measure them when they are being made via a multi-functional 3D scanning end effector.

Stefan Filpe, a Delmia European robotic expert, says: “This is the most sophisticated combination of offline programming ever attempted. Not only can the system manage single robots, but also what Kuka calls ‘Co-operating Robots’. 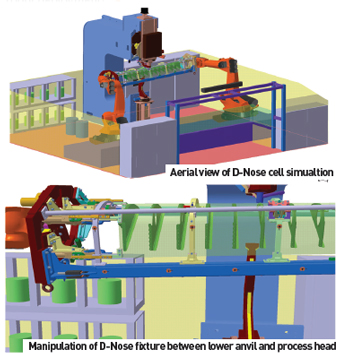 This is where two or more robots work together, so that, for example, one holds the workpiece while the others work on that moving component. Therefore, they need to synchronize their movements and anticipate the next movement together.

At Delmia, we view this ability as so important that we are constantly enhancing the capabilities of V5 Robotics to program and optimize this kind of scenario, so that it works with or without an interface with RRSII.”

Brett Green, of Kuka’s Aerospace Group in the UK, concurred with Stefan. “In the aerospace sector, the loads we are asking the robots to bear are too great for single robots.

Load sharing is therefore absolutely fundamental. Our ‘Robo Team’ has successfully tested up to 15 robots working together in this way. Similarly, it is absolutely essential that we are able to commission all our robot programs offline, as aerospace cycle times are far longer than automotive cycle times, while the number of holes to be drilled is mind-boggling. However, I predict that the mobile, flexible robotic cells we are developing for aerospace will make their way back to the automotive sector. Materials like aluminium require far more accurate rivets and as the drive to lower costs continues, tighter joints mean less material is used, so ironically it might soon be aerospace that is teaching automotive about robot deployment!”