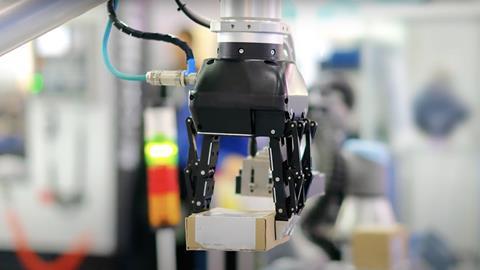 Framework for adapting passive grippers in the assembly line

Washington University scientists, inspired by working with Ford’s assembly line during the COVID-19 pandemic, have developed a computational framework that allows adaptive changes to the way robots use passive, 3D printed grippers

In order to make assembly lines more flexible, while still using relatively simple grippers that could be easily exchanged, the research team first had to research and write an algorithm that allowed the gripper robots to adapt to different objects and trajectories intelligently. Rather than giving them articulated grippers the scientists exchanged the grips being used, forming the new grippers with 3D printing processes and then re-taught the arms to be able to use a different technique.

The framework developed not only instructs the robot arm how to pick up an object but also designs the gripper that would work best for moving it. 3D printing was used to make the relatively lightweight grippers used in the research project, but other moulding techniques could be employed, from the same designs. This would allow assembly line robots to be easily adapted to different movements.

“The automotive industry is embracing additive in a very strong way. So, our lab has been working with GM and Ford on some additive projects” – Jeffrey Lipton, University of Washington

The need for more flexibility
The research, published in August, was inspired by the rigidity of assembly lines that scientists witnessed when they helped car companies move to making PPE.

Jeffrey Lipton, director of the centre for digital fabrication at Washington told Automotive Manufacturing Solutions that “It really started with our work during the COVID-19 pandemic. In the United States, we quickly realised we didn’t have the traditional supply lines to produce PPE, so at the University of Washington, we partnered and worked with the FDA and others to help get the first face shield approved and that was 3D printed.

“We worked on 3D printed face masks with Ford, who at that time had also started making disposable face shields. And I looked at what they were doing and said, ‘this is insane.’ We’ve got all this highly programmable infrastructure and Ford has this huge assembly line technology, they’re leaders in it and yet, when a pandemic hits and you need to switch what you’re producing, the solution is to throw bodies at the problem. There’s still nothing more flexible than a human. And the fact that we couldn’t, in a crisis, rapidly start up assembly lines, we saw that as a gigantic problem.”

Automotive assembly lines are very good at doing what they’re intended to do. But also, very rigid in what they do with that, which in an era of supply chain disruption means that you can find yourself with the right parts to do one thing and the assembly line to do another.

“If you have supply chain disruptions, you’re going to have this need for variability in demand,” Lipton said. “And so how can we, using 3D printing, easily handle high variability in output? Even if you have 3D printed components, they’re still not a product unless you can 3D print the whole thing in one go and so you need to assemble.

Lipton and colleague Adriana Schultz identified that grippers were a major limitation in retooling assembly lines. “There are a lot of companies right now trying to generate intelligent tools to let a worker reprogram an assembly line. And they all have failed.

“They just don’t work because the problem when you reprogram an assembly line is it’s still got the same ‘hands’; that gripper may be good for picking up one item, but it may not be good for picking up a different item,” continued Lipton. “So, if you’ve got different items that have very different gripping needs, every time you switch over, you must disassemble a complex device, assemble it, calibrate it and reinstall it. There’s all of these steps you have to go through to reprogram a work cell that’s not really feasible.” 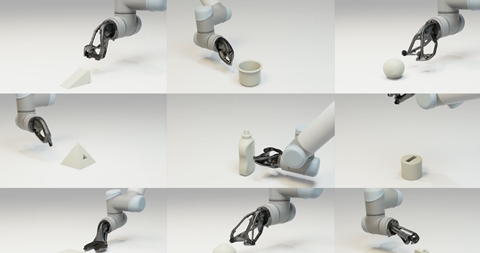 The way Lipton described the problems seemed obvious; more adaptive programming and changeable tools would make it easier to switch around assembly lines to different tasks.

So why hadn’t it been done before? “The automotive industry is embracing additive in a very strong way. So, our lab has been working with GM and Ford on some additive projects. They use a lot of 3D printed jigs to hold parts for assembly processes that they just manually design.”

The other big difference, at this point, is that computational power and 3D printing have come far enough that the idea of generating new grippers is more trivial than the idea of working out a new assembly line based on the equipment available. Which hasn’t been the case until recently. Lipton said that the grippers used in their trials cost around $20 to make and were handling relatively lightweight objects.

Ian Goode, who also worked on the project, added that “The cost of computing has also come down tremendously and that is a big component of why this works. It’s hard to have those automated pipeline processes if you need to spend $100,000 on a massive supercomputer, whereas now the cost of computation has gotten so much cheaper with really efficient data centres that we’re able to do these sorts of tasks.”

Creating the algorithmic infrastructure
That computational power is crucial to being able to take advantage of varying the grippers and reprogramming robots to be able to use them. “The real challenge was coming up with the algorithmic infrastructure. This was a nontrivial mathematical lift that the student Milin [Kodnongbua] really needed to do to make this research feasible,” said Lipton. “Because even in our reduced space that we developed, with the cheap computing power, you need a clever way of calculating a lot of mathematical values for these distance fields and integrating over them and doing the sweep. And without that intellectual lift, computing and 3D printing alone can’t solve it.”

The most challenging mathematical part of the work was creating a level of intelligence for the arms. “How could I grasp this object? Is question one and then question two is how can I approach it without intersecting the object? And both of those needed some intelligent mathematical underpinnings to be able to make it tractable. Even with our stupidly high computing resources of modern times.”

Currently, the research is in prototyping stage, while the scientists continue to look for investment to roll it out in real-world manufacturing settings.