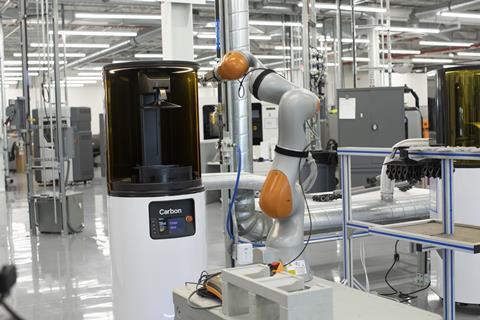 That is an approach now itself being prototyped by Ford at its Advanced Manufacturing Centre in Redford, Michigan, in the US. Specifically, a mobile robot is being used to load and unload additive manufacturing machines to enable continuous 24-hour operation of the machines even in the complete absence of any human operators or supervisors.

The robot is a wheeled device from Kuka and the additive machines are from US additive technology company Carbon. Making them work together in this way is something that Ford believes constitutes a genuine ‘industry first’ and that could have significant implications for the much more extensive of additive techniques in the automotive industry.

The details are confirmed by Jason Ryska, director global manufacturing technology development for Ford. “Currently the Advanced Manufacturing Centre operates two Carbon M2 printers using an autonomous mobile robot (AMR) from Kuka,” he says. “The printers use a liquid photopolymer that is supplied by Carbon.”

Ryska adds that the printers were already in use at the Centre in a more conventional set-up before this extension to their role. “They were in operation manually before we started using an autonomous robot,” he states. “But this new process has been fully operational for only the last few months.” 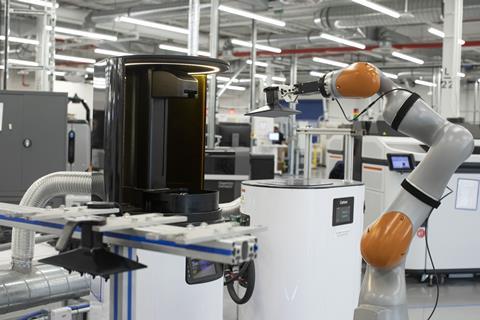 Ford has filed several patents relating to the overall process, communication interfaces and precise positioning of the robot

Machine communication at the heart of the project
The key to this collaborative use of additive machines and robot is communication. But, as Ryska further explains, this aspect of the project has essentially involved using existing technical capabilities to achieve innovative performance objectives. “We have implemented a standard communication system that we would apply to any other machine tools on our factory floor,” he says.

But, as Ryska makes plain, in this application that established approach has been put to a completely new use. “This implementation is a first for additive manufacturing,” he states.

The actual movements of the robot combine a mix of pre-programming to ensure as much consistency as possible in the required travel path with the flexibility to negotiate unexpected obstacles. “The robot operates off a digital facility map called a SLAM (Simultaneous Localisation and Mapping) map and travels on a pre-programmed path,” Ryska explains. “But it also has sensors to detect possible objects in its path and built-in AI to allow it to navigate around objects that obstruct its path.”

Moreover, says Ryska, though the combined robot and additive manufacturing process is “fully autonomous” it does not require that the robot should be dedicated to it at the expense of its availability for other tasks if required. “The robot is not fixed in one position or on a fixed gantry system,” he says. “When the AMR finishes its work on the Carbon systems it can go and perform other tasks elsewhere.” He adds that there is also “innovation around how the robot positions itself and orientates itself to the machine,” but that for the moment Ford is keeping the details to itself this due to “pending IP”.

But what is both interesting and unusual is that all the robot’s movements both in manoeuvring itself and in part handling are achieved without the aid of any sort of vision system. It ‘sees’ without the use of any cameras. As Ryska indicates Ford has filed several patents relating to the overall process, communication interfaces and precise positioning of the robot though no more details are currently forthcoming.

“Both the AMR and the robot are standard purchased units, but some custom programming has been carried out on them as well as some custom end-of-arm tools being developed” – Jason Ryska, Ford

The robotic capability of the application is provided by a combination of two distinct elements. “The autonomous mobile robot (AMR) has two axes and 360° of freedom,” states Ryska. “But it is coupled with a six-axis collaborative robot that is mounted to it. With rotation it then becomes a seven axis cobot on a fully autonomous omni-move robotic base.”

Another key point is that the hardware involved is completely ‘off-the-shelf’ and has not been modified to suit this application. “Both the AMR and the robot are standard purchased units,” stresses Ryska. “But some custom programming has been carried out on them as well as some custom end-of-arm tools being developed.”

In terms of immediate practical use as a manufacturing facility the installation has already manufactured parts for three Ford current production vehicles. “It has been utilised for low volume or custom printed products,” confirms Ryska. “As long as the part can fit within the printer, which means maximum dimensions of 189x118x326mm virtually any part can be produced. One of the components that has been made is a brake line bracket for the Performance Package-equipped Mustang Shelby GT500.” Another, he indicates, is a part for use in one of the variants in the F-150 truck range.

Ford’s ambitious strategy for additive production
But, as Ryska outlines how Ford views the potential for the use of additive technologies in its longer-term manufacturing strategy, it becomes evident that this new installation at the MTC is something far more than just a low volume production facility. Instead, it forms the first step in a highly innovatory and ambitious strategy that could have a significant impact on much of its future component manufacturing procedures.

But that use takes place within some currently closely defined parameters. One, for instance, is that all use of additive technologies either to support production or for actual in-car parts is confined to polymer materials. “That is very mature within Ford,” confirms Ryska. In contrast the use of additive techniques involving metals is still confined to the experimental area though the indications are that could change before too long. “We are doing a lot in the metals research space,” he states.

Another is that all the tasks involved in operating that currently installed base of additive machines are performed manually and hence are subject to the financial and logistical limitations imposed by the availability of people. As such, observes Ryska, “new materials and automation” are two areas where the company is focussing development efforts in the field of additive technologies. 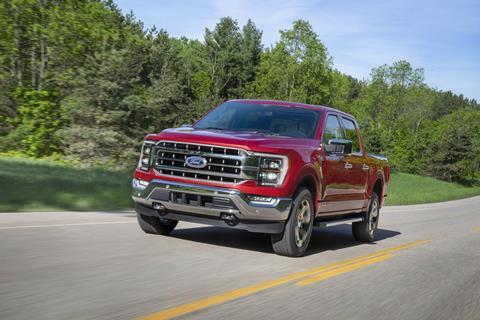 In practical terms Ryska therefore identifies four areas in which Ford is to varying degrees seeking to exploit additive technologies. The first is in their use to make job aids such as tooling and fixtures and replacement parts for such applications in the case of breakages. “I get emails every day to say that additive technology has been used to replace something that has been broken,” he states.

The second is for the actual production of parts used in on-road cars. As the actual use of the new robotised installation at Redford demonstrates this again is now established albeit within the volume constraints imposed by way the technology is more commonly employed within the company. In consequence what Ryska describes as “low volume serial production” is limited at most to “single digit thousands of units per year”.

Generally, also the type of part involved in in-car use will, says Ryska, “be non-Class A components that the customer does not see.” Apart from the brake line component another such part he mentions is a coil isolator. Nevertheless, where the materials are suitable for additive procedures and the volume requirements make the economics of a more conventional procedure such as injection moulding prohibitive then this again is a practical current reality.

But the other two areas Ryska identifies are yet to be exploited on a commercial scale. One is “service parts”, especially where the volume demands will be minimal. “There is a high cost in maintaining the tooling to do super low volume production,” he states. The case for extending the use of additive technologies to this area is therefore similar to that for their use in low volume current production. 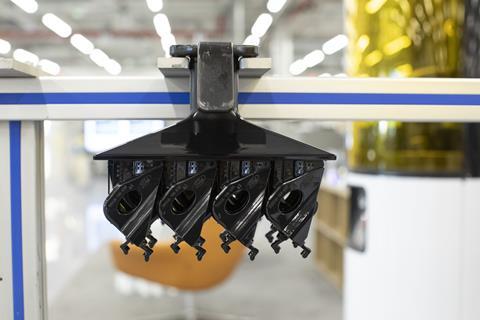 The other is for the use of additive technologies in much higher volume environments where the numbers are in multiples of tens of thousands. “Can we do serialised production for 30,000 or 50,000 or 75,000 or even 100,000 units per year,” says Ryska. “How does the technology advance in that space?”

This, of course, is where the new installation at Redford reveals itself as a harbinger of the future. As Ryska explains while low volume and replacement part requirements can be handled by “one or two printers at a site” those for mid to high volumes are going to have to have “many printers”. He envisages a possible scenario involving “a print farm with 20-50 printers running autonomously 24 hours a day seven days a week. The Redford project is, he states unambiguously, “very much aimed at finding out what the enablers are for that.”

The choice of the Carbon machines as the additive devices involved in this initial project is not mere coincidence. Ryska says that they lend themselves to the possibility of use in an automated environment for several reasons involving both their ability to be integrated into wider systems and surprisingly more practical considerations.

“This autonomous robotic application required a fully connected 3D printing system and the ability to access system APIs to enable machine status notifications, touch free opening and closing of doors as well as remote starting of new builds,” Ryska explains. “You have to have connectivity between process equipment and the surrounding manufacturing environment.”

More prosaically but in fact just as importantly the machines are front loading which greatly facilitates robotic access to their interior. Ryska says that in this case what is usually seen as the most distinctive attribute of Carbon machines – their ability to produce completely isotropic parts in other words with an entirely homogenous internal material consistency – was not a factor in their selection.

Potential for additive production at volume scale
Looking ahead Ryska can certainly envisage massive potential for the use of additive technologies at volume scale. “Anywhere you can combine multiple parts into one printed design you can reduce manufacturing processes and supply chain complexity,” he states. “So that is a key opportunity.”

But, as Ryska also recognises, additive technologies do not impose the geometrical design constraints associated with other manufacturing methods and hence enable greater design freedom to achieve enhanced performance objectives. “So, the selection of parts that benefit design or manufacturing not just because it is technically feasible is what we want to target,” he states. “You must select parts that have some enterprise advantage. Just because you can print something doesn’t mean you should.” In fact, he says, additively manufactured parts used by Ford are already designed that way.

So, does Ford plan to use robotised additive processes worldwide? Ryska thinks for a second before providing an answer: “How about yes. Nothing is announced yet but that is what we are working towards.”