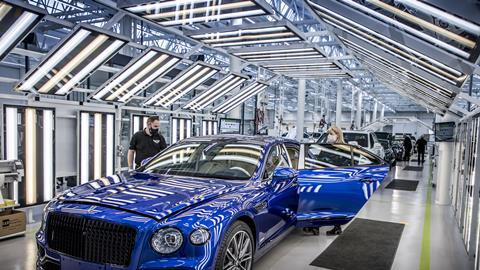 Bentley increases use of additive manufacturing

3D printing makes its mark in the luxury segment as early adopter, Bentley, increases its use of this process beyond prototyping

At first sight an association between high-end UK car maker Bentley Motors and intensive use of additive manufacturing technology seems unlikely. The car maker’s image is that of luxury and refinement even to the extent of the hand-finishing of interior surfaces of the driver and passenger spaces. Additive manufacturing on the other hand whatever the specific technology involved seems somehow impersonal taking place as it invariably does in its own closed environment.

But the perception would be wrong: “We were early adopters of additive manufacturing within motor industry. In fact, we installed our first fused deposition modelling (FDM) machine in 1999.” Those are the words of Tom Riley, functional manager within the R&D workshop for Bentley at their manufacturing site in Crewe in the Northwest of England. Moreover, as he continues to describe the company’s use of additive manufacturing it becomes evident that in the little over two decades since then that use has advanced far beyond some niche application to become pervasive and fundamental to the company’s operations.

Early use of the technology at the company was, though, confined to the application that at the time provided its generic name that of ‘rapid’ prototyping. “Our initial aim was to prototype new component designs,” confirms Riley. “We aimed to ensure we did not miss errors as might have been the case in a purely digital world.”

In practical terms what that meant when Riley himself joined the company in 2010 was that at the time “we perhaps printed 10 to 15% of components in-house.” Since then, though, that figure has grown to a different order of magnitude. “We are now at the point where 90% of components are printed in-house and validated here at Bentley,” he states.

Until very recently the company’s additive manufacturing resources comprised what Riley describes as “a large number of production grade machines in the R&D workshop and a number of smaller desktop satellite machines”. There were, in fact, seven FDM machines, which build parts by extruding successive layers of molten material, within the workshop and two smaller machines of the same type elsewhere. In addition, there was also a stereolithography machine, which utilises a laser to cure successive layers in a bath of liquid, and some ‘multi-jetting’ capability. 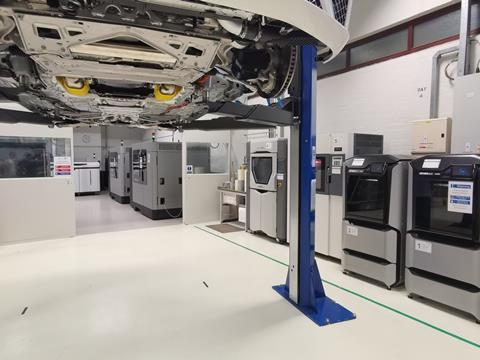 Bentley has invested £3m in its additive manufacturing operations

Investing in additive manufacturing
But as the result of a further £3m investment into its additive manufacturing capabilities the company is now operating some substantially augmented resources. “Our recent investment focussed on two main areas,” states Riley. “We acquired two additional large format FDM machines, but we also made a strategic move into multi-jet fusion technology, which offers a lot more capacity and throughput.” The latter is a powder-based technology which Riley says is much quicker than other powder-based counterparts. “We can now turn around a batch of parts in a day-and-a-half,” he states. “There can also be a larger number of parts in-build simultaneously than with FDM.”

One element of continuity, though, is that all the company’s additive manufacturing operations remain confined to the use of polymer materials. “We only offer polymer materials on-site though we constantly monitor the potential for metals,” confirms Riley. Another is that the company will not actually identify its additive technology suppliers.

As far as that original prototyping application is concerned the company’s use of additive techniques is now close the limit of what it deems practicable. “The only thing that we have never printed is the full wiring harness,” states Riley. “It is just not feasible. We wouldn’t gain much knowledge from it.” But, he adds, “we do print full-scale engine mock-ups and elements of body-in-white structures, though these are for static assessment purposes only.”

In addition, the company’s additive modelling capabilities have been utilised to facilitate what Riley describes as “significant work” with the in-house aerodynamics team to enable both full scale and model scale aerodynamic testing. “We have used it really extensively in that process,” he confirms.

“More recently we have started to produce parts for series vehicles as well as components for bespoke coach-built cars” – Tom Riley, Bentley

Applications beyond prototyping
But Bentley’s use of additive manufacturing has also now moved out onto the shopfloor to aid production and into the vehicles themselves. “Up until last few years it has been about 60% for prototype parts and about 40% for jigs and tooling to support actual production processes,” confirms Riley. “But more recently we have started to produce parts for series vehicles as well as components for bespoke coach-built cars.”

In fact, reports Riley, the last few years have seen the company’s use of additive technologies grow significantly as a support for an area in which manual craft skills still define the final product quality. “There has been a massive uptake in woodshop processes,” he confirms. “We previously used machined solid polymer or aluminium frames to hold wood veneer in place when it is being laminated. But with FDM we can create a part with a much shorter lead time that is hollow or has internal honeycomb structure.” Another application in the same area has been the introduction of hollow plastic sanding blocks instead of heavier and more cumbersome solid wooden units.

In particular, observes Riley, “the use of additive technologies really comes to the fore with coach-built vehicles where you may be creating tooling for a run of perhaps just ten to twelve cars. It is a much more cost-effective and sustainable solution for the business.” It is an instance that bears out his contention that in a car maker such as Bentley “there are definitely more applications for additive technologies than in the volume market.” He cautions, though, that even for series vehicles the parts involved “will still tend to be lower volume components for instance either a regional market specific component or an option feature.”

Another point Riley stresses is that so far, those parts would invariably be “hidden B-surface components.” As such the “the customer would never know they were there.” The practical benefit for the company is that making such parts additively would essentially replace the need for small low-volume injection moulding tools. “It is a more effective way for us to produce components but also more sustainable because we can ship the material here in bulk and then turn it into the geometry we need,” says Riley. “In terms of volumes the figures would be in the low thousands over the life of a series production vehicle.”

Democratising the additive process
Bentley’s actual use of additive technologies so far could therefore be characterised as intensive but fairly conventional. But where the company is perhaps unusual and distinctive is in the efforts it puts in to ensure that knowledge of and exploitation of their capabilities is pervasive throughout the company. Riley again explains how it does so. “We operate an online request system within Bentley,” he states. “The facility is open access to any Bentley colleague so anyone can submit a request maybe with a CAD file and we can produce it.” 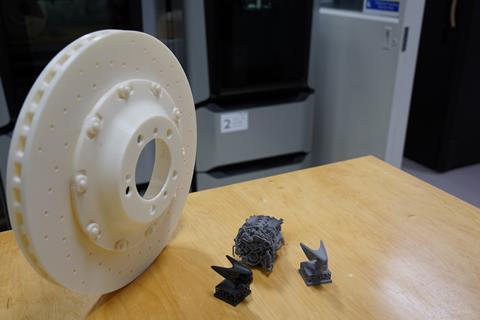 This system is underpinned by a comprehensive internal promotional effort. “We have set up a cross-functional additive manufacturing steering committee with representatives from all over the business who meet once a month to discuss how to drive the technology,” Riley says. Appropriate training is an essential underpinning. “There are online training courses,” he explains. “One is quite basic and is aimed at just about anybody. But another is aimed at active users and focusses on technology selection.”

In addition, the company is now also rolling out what Riley describes as “intensive face-to-face design for additive courses through a strategic partner for engineers and designers.” Those taking part “tend to be people with real applications and have included chassis, powertrain, interior and exterior trim engineers.” But other aspects of the campaign have stretched in one direction down to the shopfloor and in the other internationally out into the company’s parent Volkswagen Group.

The first of those have involved ‘Sprint’ events in which additive machines have been physically located next to the production line. “We have had a team of designers, engineers and apprentices walking the production line and talking to colleagues to gather improvement ideas,” confirms Riley. “They were sketched immediately on a piece of paper and then printed overnight. For instance, we designed and made specific tools for fitting clips into the vehicle bodies.” The second involves exploiting the relevant knowledge base within the wider Volkswagen Group as well as the main company. “We meet once a month with Seat, Audi and Lamborghini as well to share ideas and best practice,” confirms Riley. “There are hundreds of machines across the Volkswagen Group.”

Riley can provide a figure for what this means in numerical terms. “There are around 4,000 on-site at Crewe and about 400-500 individual users requesting jobs from us each year,” he says.

Moreover, the intensity of all these activities is set to increase. Next year, for instance, will see the opening of a new Engineering Technology Centre at Crewe that will amongst other operations act as an expanded central resource for the company’s additive operations. But, Riley confirms, it will also have an educational function. “We want to get people in from around company to look at the technology,” he says. “Online courses are fine, but nothing beats actually seeing the machines in action.”

Expanding applications into new areas
Printing in other materials most obviously metals is, Riley says, another target. So is enhanced environmental efficiency. “We are very keen to find more sustainable ways to print so that may mean using recycled feedstock but that will need work to ensure that in-car components meet the necessary requirements,” he states. “That is something we are going to start looking at.”

Even more intriguingly Riley also promises that over next 6-12 months the company will be releasing details of uses of additive technologies to create further applications that “no-one has ever seen before.” That is because they “will be visible to the customer.