As the wheel turns for Ford

Globalisation takes on a new dimension as Ford rationalises its platform strategy with baseplates from around the world, as international executive Bill Osborne explains

September 5 marked a full year since the Ford Motor Company named an industry outsider as its new CEO and the firm buckled down with its new leader to reinvent itself for a new century. The first 12 months of the Alan Mulally era have been marked by tens of thousands of employee redundancies, the announcement of a dozen plant closures, and the consolidation of platforms and product lines as the company shrinks to survive.

Meanwhile, major pieces of the empire have been put on the auction block, with Aston Martin the first of its luxury marques to be sold. Jaguar, Land Rover and even Volvo are being shopped around the world market, while the controlling shareholder members of the Ford family have mortgaged their entire inheritance – land, factories, tooling, and even the brand names – to raise $18 billion (about £9 billion) to fund the company’s cash burn while it rebuilds.

No wonder observers are constantly on the lookout for evidence that Ford is closer to finding its balance again.

It may be difficult to detect with the naked eye, but significant progress has already been made at a company that insiders and observers say was not only far too large for its shrunken market share, but impossibly hidebound by its own bureaucratic culture and tradition. 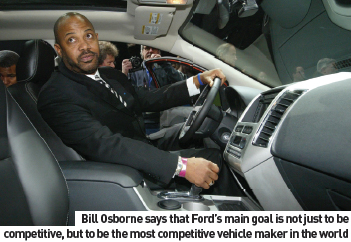 Where is the light beginning to shine at the end of Ford’s tunnel? Several key, mid-market products that absolutely had to do well in the North American marketplace have connected with consumers, notably the Mexican-built Ford Fusion mid-size sedan, and the Canadian-built Ford Edge crossover. Meanwhile, manufacturing costs are coming down, according to the Harbour study, and the quality of key products is going up, according to analysts JD Power and Associates.

The last two improvements are the route Ford will follow to find its future, says William H (Bill) Osborne, a senior member of the international executive team charged with leading the turnaround. Osborne, currently President and CEO of Ford Motor Company of Canada, Ltd, has been in this post since autumn 2005.

Competitiveness is still a major goal

In an interview in Detroit with AMS, Osborne said achieving world-class competitiveness in its manufacturing operations remains Ford’s most important goal. Fortunately, he says, the company’s employees and their unions – the UAW in the United States, and the Canadian Autoworkers Union (CAW) in Canada – have arrived at the same realisation.

“Ford and the CAW realise we have to become not only competitive, but the most competitive in the world, and I think we’re both focused on that. We’ve made some great strides. In this business, it’s a moving target. What’s competitive today is not necessarily what’s going to be competitive tomorrow . . . we’ve still got some way to go.”

That has meant downsizing Ford’s American and Canadian operations, and negotiating leaner contracts with the unions – on a plant-by-plant basis outside the main bargaining process – what the company calls “Competitive Operating Agreements.”

In Canada, Ford has closed its Ontario Truck plant in Oakville, just outside Toronto, and folded it into a larger, retooled multiple-platform facility next door that builds the new Ford Edge crossover, and its Lincoln sibling, the MKX. The Oakville plant is currently preparing to add the station wagon-like Ford Flex Crossover and a Lincoln stable mate to the Oakville production schedule, plus likely hybrid versions of all four vehicles.

In Windsor, just across the border from Detroit, Ford has closed its historic Windsor Casting plant – the one Henry Ford built in the 1920s to supply the Commonwealth with Model Ts – and will in December close its Essex Engine V-6 engine assembly operation. Although less than 30 years old, it was already half empty, V-8 production having already been cut as pickup truck sales plummeted in the US over the past two years.

As part of Mulally’s drive to simplify the company and its product lines, Ford is in the midst of reducing the number of vehicle platforms worldwide, cutting the variety of engines it builds, and consolidating supplies of parts, structures and sub-assemblies across the board. 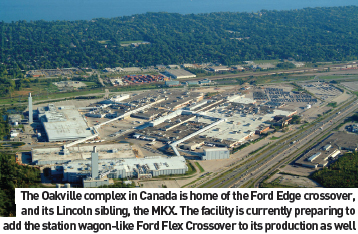 Six-cylinder engine architectures offered by Ford will be cut to two engines, from the current eight. Four cylinder engine architectures have already been slashed from 10 engines, worldwide, to three. Even the seats structures have been consolidated, collapsing 28 separate designs into only two. “All the bad news is out,” Osborne says of the sites and plant closures under his watch.

Osborne’s operations have benefited slightly by one closure: the transfer of the Lincoln Town Car from Wixom, Michigan to St Thomas, Ontario. The vast, 4 million square feet Wixom plant, located about 20 kilometres west of Detroit, closed completely this summer. Town Car tooling was trucked across the Canadian border and up the highway to St Thomas, where it will be built on the same production line as the Ford Crown Victoria full-size sedan and its sibling, the Mercury Grand Marquis. All three full-sized, rear-wheel-drive sedans are built on the same venerable Panther platform, which has been spinning profits for Ford since 1978.

At 29 years old, the Panther platform is the oldest in the North American industry and is not expected to survive more than a couple more years as the favourite car of “cops, farmers and old guys,” as the saying goes. A new rear-wheeldrive platform being engineered by Ford’s Australian unit for its Falcon badge is being considered for both the next generation Mustang, and a new line of rear-wheel-drive sedans that include the replacements for the Crown Victoria and the other Panther vehicles.

But the Panther cars won’t be put out to pasture just yet, Osborne says. The Crown Vic “is still part of the lineup.

It has small but loyal customer base. It’s an important vehicle in the government segment of the market. Police departments around North America just won’t let us kill it, as often as we’ve tried,” Osborne tells AMS with a laugh. “So it’s still a viable product based on sales – it’s still the dominant vehicle in the police car market. The car has been refined over the years, it’s economical. So essentially, it’s a ‘bullet-proof ’ product.

Profitable product kept on the road

“In the short term, it is very good news for St Thomas,” Osborne elaborates. “It allows us to keep a very profitable product on the road and to get the synergies of that one platform. In the long term, however, both the company and its Canadian union expect the St Thomas plant to become one of the dozen plants Ford says it intends to close in North America.” Only seven of the closure targets have been publicly identified to date.

While successful both with critics and with consumers – Osborne brags that the early units of the Ford Edge didn’t last more than 48 hours on some dealers’ lots – Ford had a very slow launch of the Edge model, with first shipments delayed by months with rumoured production problems.

Osborne won’t say what they were, only that no changes were made either to suppliers or to parts to rectify the problems that delayed the launch.

But the decision to delay the shipping of the first units while the issue was addressed has paid off: early units were troublefree, and the vehicle is a hit.

“Early sales were dramatic,” Osborne says. “They sold extremely quickly.” That has meant an overtime schedule for the Oakville plant for most of 2007, although there still isn’t enough demand to justify the third shifts that are becoming the norm in North American automotive assembly operations.

Osborne tells AMS, “It’s quite common now that when we bring out a new vehicle, we’re already working on the next generation while we’re still launching the new one.

Our product line-up will be completely new by 2010. That’s unheard of in this business. Historically speaking, platforms and models have had a long cycle life in this business. Our goal now is to shorten our product cadence and create a steady stream of new products over time. I think the industry demands that kind of pace, and that’s the kind of pace we’re keeping up with.”

Company-wide, Ford is being remade by CEO Alan Mulally. The 57-year-old was the first of the outsiders invited into the inner sanctums of the famously insular Detroit. He was an unlikely choice, having no experience in either retailing or the automotive industry. A former Lexus owner – an indication of what he thought of America’s recent home-grown automotive products coming into the company – Mulally’s fame rests on rescuing Boeing Company from the brink. Ford was on a similar precipice when he joined the company.

In a nutshell, Mulally’s plan is to make Ford Motor Company profitable again worldwide by globalising its platforms. The next-generation Focus compact and Fusion mid-sized sedan will be sold worldwide, the company announced in late August. Analysts say they believe Ford will start building a global Focus in North America in 2010 or 2011.

Fusion’s evolution into a truly global mid-sized car will probably take place atop Europe’s Mondeo platform, bringing more of Ford’s European expertise to North America. This is something critics have been suggesting for years as they watched American travellers rave about Ford’s European Focus, but turn up their noses at the stodgier North American versions on offer at home.

Mulally has said this product duplication shocked him when he delved into the company’s product line-up after becoming Ford’s CEO. “We all had to suck it up and say, this is an opportunity rather than a problem,” Mulally told reporters during his first anniversary as CEO interviews.

A global focus on the future

The new global Focus and Fusion will be built on a common B-car platform that will be sold in Europe, North America and China by 2010. But the company will continue to offer customised styling and tuning for each market. The public’s first glimpse of the new B-cars will be the Verve concept Ford, which debuts at the Frankfurt auto show in September 2007.

Under development by Mazda, Mulally says it will provide the architecture for 70 per cent of Ford products by 2012 and be one of the 10 “core” platforms that will survive a consolidation process that will eliminate at least eight other architectures. Chief among the survivors of that process will be the C1 platform, which already underpins the Volvo S40, Mazda 3 and the current European Ford Focus, and the EUCD mid-sized car platform under the Mondeo and S-Max crossover.

A global rear-wheel-drive large car platform being engineered in Australia Is scheduled for the next-generation Falcon in that market. Ford executives are talking increasingly about U.S. possibilities for that platform. It could underpin the next-generation Mustang and larger RWD sedans for the Ford and Lincoln brands – finally replacing the Panther platform.

A new small pickup truck is also being engineered in Australia, Ford officials revealed in August. Although the small truck’s fate in North American is uncertain, the Thailand-built compact is crucial to Ford’s export business as it ships the truck to 130 countries. There are no plans to take Lincoln global, Mulally says: it will remain strictly a North American brand, even if the rest of Aston Martin’s former stable mates in the Premium Automotive Group are eventually sold. Simplifying the Ford lineup worldwide is the more important goal, the company believes. “The key to this business is innovation,” Osborne says of the pace of change. That’s what I have to say about this business – there’s no rest and no refuge,” Osborne concludes. “We used to have a phrase for our truck brand in the 1990s: ‘The best never rests.’ And that couldn’t be more appropriate for today.”