In the first issue of AMS, it was predicted that a welding revolution was on the horizon. Important news, as there are up to 3,000 individual resistance spot welds on every passenger vehicle.

The revolution, it was reported, was to be brought about by the arrival of hydroformed components, aluminium alloys and – later - space frame construction. In addition to standard resistance welding (with the occasional MIG and laser welding operations), would come a full range of welding techniques.

Laser welding was predicted to increase, primarily due to the high torsional strength of the weld, according to Graham Abbott, Senior Technical Engineer at Vauxhall, UK. In addition, he noted that laser welding could offer average weight reductions of between 10-15 kg per vehicle over standard welds. 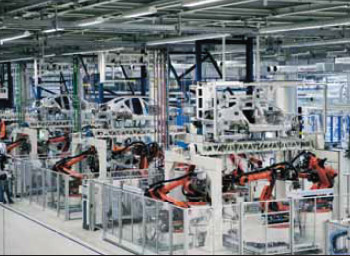 But laser welding does have its problems. One of the challenges is panel fit, which should be 0.1mm or better. Another is weld contamination. “If you’re welding a mild steel that is coated with zinc or a zinc-nickel combination, the action of the laser is to vaporize the zinc and the nickel,” explained Abbott.

“If you don’t provide a good means of escape for the fumes, you get terrible weld contamination, porosity and surface bubbling,” Remote laser welding could be the solution. This differed from standard welding in that the laser focusing head, used to direct the beam, is positioned away from the workpiece. The technology could perform five welding operations per second.

DaimlerChrysler installed a remote laser welding system from Utica Enterprises’ laser products division at its Jefferson North plant in Michigan, making front fender inners. The equipment was considered a great success, the laser-welded parts demonstrating a 30% increase in strength over equivalent resistance welds. The technology was later incorporated into the assembly line for the 2002 Grand Cherokee.

Using a 3kW diffusion-cooled CO2 slab laser, the maximum achievable welding speed was reported to be 150mm/sec. The design of the laser source and the flying optics produced a power density of 1 million W/cm2, even at a distance of 50in from the focusing element. A 5kW laser source was anticipated for future use, with the goal of aluminium welding.

Another form of laser welding was plasma arc welding, under development by Arc Kinetics of Coventry in the UK. Similar to TIG welding, the plasma arc process involves passing the TIG welding arc through a small nozzle.

While the process has been in use for the last decade, notably at Jaguar for joining the main floor of the XJ40, that was in steel applications. Arc Kinetics was hoping to interest users in the system’s ability to weld aluminium.

According to Russ Hughes, the company’s technical director, aluminium spot welding had ‘enormous potential’. Apart from the fact that it is a one-sided process, allowing improved access, it is also low cost.

Hughes estimated that a single plasma arc weld for aluminium cost 0.77 cents, which compared to rivets at between 11-12 cents each. Over a five-year period, this could translate to savings of about $19 million.

As recently as 2001, few welding robots involved in automotive production were able to carry out even the most basic reporting functions. They were limited to the collection and storage of completed operations numbers – and even this information was only available by visiting the production floor and accessing data directly from robots on the line.

Panasonic’s PanaPro software was one solution for the collection and dissemination of data collected during robot operation. With robots connected via a file transfer server to client servers, detailed information about a particular machine’s activities could be accessed using the internet. It could then be shared within a single plant, across multiple plants or through the whole supply chain.

With the capability of monitoring up to 256 individual robots at any one time, the data manager could elect to retrieve and store data at particular times, offering the later opportunity to see which welding program the robot was running at what time, so enabling the quality control of completed parts.

A later version of PanaPro offered the additional functionalities of addressing quality and production monitoring, by collecting data - or offering real-time access - to a robot’s power supply and travel speed, imperative information in regards to weld quality.

Pre-programmed alarms were triggered should information fail to be within prescribed limits. It was a key step in the integration of robots into production lines. No longer would robots simply complete a task – they could be proven to have completed a task, and within the desired parameters. 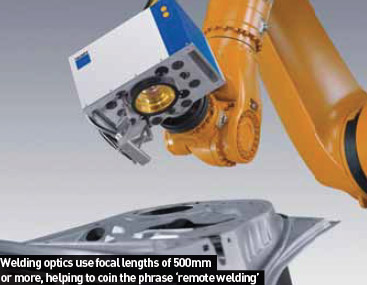 Moving beyond conventional techniques, Trumpf is one company that over the past decade has been developing remote laser welding. At the 2001 Schweissen and Schneiden trade fair in Essen, Germany, the company demonstrated a working cell built around a 5kW CO2 laser, the TLF5000. It was welding a BMW carbody subassembly.

“This is a part that is currently resistance spot welded with 12 spots, in a cycle time of approximately 32 seconds,” said Eckerd Meiners, Director of Sales and Marketing at Trumpf. “We replaced those spots with 23 stitch welds, achieving a cycle time of less than eight seconds.” Trumpf said the unit would be available in 2002.

Welding solutions for doors are of particular interest to carmakers, owing to the high density of welds in each unit. Rofin Sinar’s Marcus Lingner estimated a cycle time saving of 70% using the company’s remote laser welding solution, in relation to door assembly.

Noting that there would always be a place for resistance spot welding, Lingner predicted that the decade would see considerable growth in the use of remote laser welding, with virtually all carmakers using this welding type on doors, boot lids and bonnets. The reasons were both speed and to take advantage of the added strength in order to meet vehicle safety standards.

The technique was anticipated to further grow due to its flexibility. Unlike resistance spot welding, where the two components of the welding installation are highly integrated, remote laser welding applications feature separate tooling and welding power units.

“The (resistance spot welding) system is often designed for a particular model and 90% has to be scrapped when the model stops production,” explained Michael Bembenek, Manager for Advanced Technologies at Aetna. “Remote laser welding makes a lot of financial sense because it is equipment that can be re-used many times. Only the tooling has to be changed.”

By 2004, carmakers were already fulfilling Lingner’s predictions. In setting up the build processes for its Mark V Golf, Volkswagen had installed a variety of lasers standardized on the Trumpf HL4006D 4kW YAG model.

There were 150 individual lasers in the bodyshop, shared between 250 robots, each equipped with a welding head. If one of the lasers failed, the whole bodyshop would come to a halt in under a minute, but that was not a worry for Klaus Loeffler, Joining Specialist at VW. “The lasers are very reliable, they run at 99.99% up time.”

At Wolfsburg, the lasers were housed in an enclosed area beneath the bodyshop, making them easier to manage and maintain. “If you keep them clean, they work much better,” explained Loeffler. The fully-automated laser-based framing station at Wolfsburg was, according to Loeffler, the most amazing machine VW had ever built.

Because of it, Volkswagen decided to switch to framing processes using 100% laser welding in order to eliminate the vibration associated with spot welding. Another advantage was the 40% space saving, while improved flexibility allowed the system to build any VW model.

The rise to prominence of laser welding for body-in-white applications in recent years has been impressive. Its success is, however, unsurprising, with negatives limited to the required capital investment and stringent limitations on part positioning (in process) against the numerous advantages to be gained; singleside access, reduced flange widths, reduced thermal distortion, increased torsional stiffness, high process speed and design flexibility.

One area that still required attention, though, was that of welding dissimilar materials such as steel and aluminium. A solution developed by Corus was fluxless laser brazing.

Traditional laser welding methods had required the use of saltbased flux, making the joint susceptible to corrosion. The Corus development worked by applying an aluminium-based filler wire to create a weld on the aluminium side of the joint. The molten filler metal then ‘wets’ the steel, creating a brazed joint on the steel side.

Tests showed that the new technique created a very thin intermetallic layer, making it possible to create joints that are, in some cases, stronger than the parent material.

This and other developments illustrate the sophistication and success of the continuing evolution of the welding process.