Exotic metals such as titanium and magnesium offer carmakers lightweight alternatives to standard materials. But drawbacks such as the strength (or lack of it) and cost of the basic commodity have served to kept these choices very much in the shadow of steel and aluminium.

In fact, it was aluminium which was once expected to replace steel as the material of choice for mass production in the automotive sector. But the revolution just didn’t happen.

In 2000, manufacturers of welding equipment were developing and releasing new products specifically for the joining of aluminium. Incorporating breakthrough techniques to weld and braze the metal without deformation or loss of strength, these tools were put forward as must-haves to remain competitive in the market.

But today, steel is still the material of choice in serial car production. There are a number of key reasons that has allowed it to maintain its lead in the material market

While aluminium prices have recently dropped to levels not seen since 2000, for the better part of the last decade, the price of aluminium was on the rise, peaking in May 2008 at just over $3,000 per metric tonne. This alone could account for aluminium’s failure to make much-anticipated gains across automotive production markets. But there is more to the story than price. 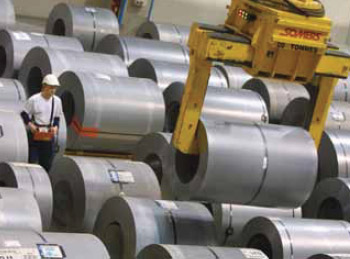 Steel and aluminium have been rivals for the attention of carmakers for almost two decades, and the battle really began in earnest when, in 2000, the US steel industry commissioned MIT’s Materials Science Laboratory to undertake a cost analysis comparing the two metals.

Of primary concern was a theory put forward by the aluminium industry that, on a product lifecycle basis, aluminium-intensive vehicles and their manufacture produced less overall CO2 then their steel counterparts.

The argument was that by replacing two pounds of steel with a pound of aluminium, the resulting vehicle would emit 20lbs less CO2 over its lifetime. Burning less fossil fuel, the lighter vehicle would start to cancel out the additional CO2 emissions generated in aluminium-making by the approximate mid-point of the vehicle’s running life.

This would, in turn, overcome the energy penalty of the aluminium smelting process, which produces approximately six times more CO2 per ton than equivalent steel production.

However, MIT’s Dr. Joel Clark, a noted materials expert, found other drawbacks from the increased use of aluminium. In a vehicle-to-vehicle comparison, aluminium versus the so-called Ultralight Steel Auto Body (ULSAB), optimised for low mass and increased strength, could generate a claimed 678lbs less CO2 than an aluminium-intensive vehicle over the vehicle’s life.

Taking into account the ‘fleet effect’, whereby 100,000 units are produced over 12 years, Clark estimated that it would take approximately 35-38 years of driving for the crossover to take place where the CO2 saved by driving the lighter vehicle would offset the CO2 released during virgin aluminium production.

Of course, this comparison would not have been so favourable to steel if the industry as a whole had not been revisiting its product range to research and introduce lighter and stronger steels.

High strength and ultra-high strength steels have taken centre stage in vehicle production, to the overall detriment of aluminium. As such, aluminium has remained a feasible option in luxury performance vehicles such as Audi’s A8, the Chevrolet Corvette and Jaguar’s XJ range.

The ULSAB Advanced Vehicle Concepts Consortium was made up of 35 of the world’s largest steel producers. Its goal had been simple: to reduce the weight of steel car body structures, while maintaining (or improving) crash performance and cost. Materials were selected based on mass, performance and crash requirements. High-strength steels between 210-550 megapascals (Mpa) and ultra-high strength product (greater than 550Mpa) could be used for more than 90% of the body structure, including tailor-welded blanks, it was concluded.

The solution is compromise

So is that all we can expect from aluminium? While the material has up until now largely failed to replace steel in automotive BIW applications, the metal still has a vital role to play in the automotive sector.

In a vehicle crash, steel will deform differently depending on the impact speed. Aluminium, on the other hand, offers dependable deformability no matter what the impact speed, making it a good choice for the construction of passenger safety cells.

Additionally, aluminium engine blocks are now more widely used than ever. Early examples were renowned for returning increased cabin noise in comparison to cast iron blocks, but with advances in design, machining and assembly techniques, aluminium-based engines are now similarly quiet. And they have the added advantage that the overall engine is considerably lighter than its iron counterpart.

So instead of replacing steel, it is likely that aluminium will continue to be used in conjunction with steel, but only for its specific material properties that make it best material for the particular job.

Plastic is on form

The opening comment in an AMS feature on plastics usage in automotive production in the September/October 2008 issue said: 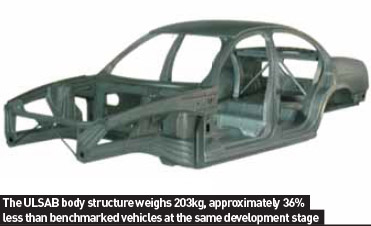 Observers might understand this to mean that carmakers have used plastics to replace more expensive materials, where and whenever possible. But that is a limited view of the technology that automotive plastics represents.

It is true that plastics have been used to cut costs; they have become much cheaper. Had the original materials still been in place at the original cost, most members of the car-buying public would not be able afford new cars.

Plastics have made such significant advances over the past 10 years by taking advantage of technologies developed specifically for the material.

New polymer combinations create plastics that are both strong and durable, while new coatings have allowed carmakers to incorporate plastics into virtually all areas of the automotive build process.

The early 2000s saw the introduction of polyurethane long-fibre injection (PU-LFI), for example. In this process, glass fibres are cut to length and distributed as required in the mould.

Steve Learney of KraussMaffei, which developed the technique, commented at the time: “Because of the high degree of control that can be exercised over the length and distribution of the fibres, and the ability to vary the amount of polyurethane applied, the material properties of the finished component can be finetuned from one region (of the car) to the next.”

This technique offers a range of advantages, including not having to cut and shape glass-fibre matting, and reinforcing only the areas that require additional strength. This returns components that are lighter and cheaper and can be used in interior or exterior applications.

Another new product, from Bayer Polymers and Lumitec AG, offers so-called ‘smart surface’ technology. The outer skin of luminous plastic components consists of a transparent film made of the polycarbonate Makrofol or polycarbonate/polybutylene terephthalate blend Bayfol.

Starting with a transparent electrode, non-conducting layers are added, followed by a counter electrode. With the application of 110V, supplied from the car battery through an inverter, the back-injected shape lights up in the given design, providing a maintenance-free feature that can be added as a module.

New plastics continue to come regularly to market. Lexan from SABIC and BayVision from Bayer Material Science are new polycarbonates that can replace glass, allowing designers to safely incorporate larger windows and panoramic sunroofs into virtually any model.

Finally, a recently-introduced plastic is not so much about the product itself, but about how it was produced. In the Mazda Premacy Hydrogen RE Hybrid, the company used a so-called biotechmaterial to make a biofabric, made of 100% polylactic acid, a plastic created by combining large numbers of lactic acid molecules that are made from fermented carbohydrates such as plant sugars.

Further Mazda research into so-called 'bioplastics' uses non-food based cellulosic biomass in vehicle construction. Although panels of this new material might not be available for another five years, it serves to illustrate that there is plenty of development life yet in the future of plastics.

In fact it could be said that carmakers are only limited in their plastics usage by imagination and the timeframe required to produce the plastic needed for a particular application.