In 2000, AMS reported BMW as having a total of 1,275 bodyin- white robots in total at its Dingolfing, Regensburg and Munich plants. The Regensburg equipment alone, totalling 475 units, represented an investment of $320 million. Meanwhile, GM had installed 500 Fanuc robots at its Ellesmere Port facility in an overhaul of its BIW operations. The company’s spend was $320 million.

Two key robotic attributes were driving these purchases: that the automation they bring can be readily adapted to existing production functions; and that robotics allow manufacturers to build the right vehicle at the right time in order to satisfy customer demand.

Manufacturing flexibility was certainly the goal at Volvo’s Ghent facility. Producing both the V70 and S60, automated pallets (which could accommodate either model) brought the underbody, bodysides and roof sections to the welding area. There each cell featured ten Comau Smart H4 hollow wrist robots completing 100% of the spot welding.

Commented Comau’s marketing and standard application manager, Arturo Baroncelli: “The price of a robot is decreasing due to economies of scale,… and their performance is continually improving with higher payloads, faster speeds and greater precision.” 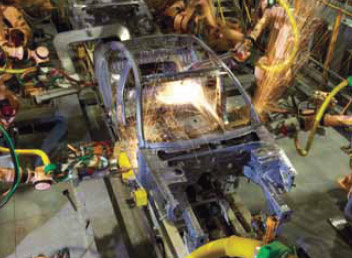 With the area of robotic welding becoming saturated, robot producers were soon looking at new areas of use. One of these was from Staubli with its Flexible Robot Absolute Measuring System (FRAMS). An evolution of the sensor tunnel, where fixed sensors took vehicle body measurements, FRAMS completed the same series of measurements (typically between 50 and 60 points) using a single sensor located on a robotic arm.

While this was marginally slower than fixed sensors, the system could handle a variety of body styles by simply initiating a new measurement subroutine. “With FRAMS you gain flexibility,” claimed Gerard Vogt, Project Support Manager at Staubli, “and you have less cost because there are fewer sensors. Perhaps a robot solution is the same price as a 10-sensor fixed solution, but if you have two robots replacing 200 or 300 sensors, then it is much cheaper.”

BMW’s Spartansburg plant in the US was one of the first to install a FRAMS system, with four RX 130L robots each fitted with a Perceptron sensor. They measured 137 points in 92 seconds to a repeatability of +/-0.15mm (without temperature compensation).

Another feature which extended the range of tasks that robots could complete autonomously was the introduction of force control. At Ford’s Van Dyke transmission plant in Michigan, the company began using force control-equipped robots in 2001 to assemble automatic transmission parts, specifically clutch hub and clutch plate assemblies.

“The clutch plates are not necessarily concentric or aligned on any particular axis, and they are random in rotational phase. The low internal friction between the clutch plates also makes the assembly harder,” he added.

Successful completion of the task required a high-speed change of direction, while simultaneously controlling the force applied. To achieve this, Ford and robot suppliers Fanuc and Kawasaki developed standard robots fitted with an external force torque sensor on the end-of-arm tooling.

In operation, the clutch plate assembly is conveyored to the assembly cell and is locked in place before the robot inserts the clutch hub. The force-controlled robot follows an initial insertion pathway, going into a search routine if that proves unsuccessful. Various attempts are then made to complete the task within assembly tolerances.

Previously completed by manual workers, fitting the hub requires a twisting motion that would inevitably lead to worker injury. The end result was a force-controlled robotic cell operating with approximate cycle times of nine seconds, producing more than 1,000 units per shift. According to Gravel, the failure rate due to the parts being poorly located was down to around three per shift.

Automation had clearly been beneficial from both cost and quality perspectives. As such, logic dictated that it be extended as far as possible across the automotive production landscape. A case in point was Hyundai’s manufacturing facility in Alabama. At the time of opening in 2005 it was billed as the most automated car plant in North America. All material flow from stamping to the welding shop was automated via an electric monorail, and 250 welding robots automatically soldered and seal stamped parts into basic vehicle bodies.

In the paintshop, each car body was submerged in a cathode dip bath, rotating 360 degrees to eliminate air bubbles. Priming, painting and top coat then followed to complete the fully automated process. Even the assembly line, which compared to other areas is relatively automation-free, featured a system by which the car bodies were presented at heights specific to individual workers. 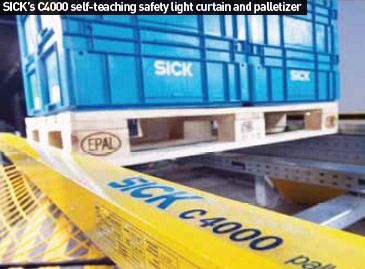 “Since it’s one continuous line, each robot zone has an interlocking gate that you can enter,” explained Josh Wallace, the plant’s Assistant Manager of Safety. The interlocked gate is zoned off to shut down just that particular zone. “You could potentially walk into any area of that line, but each zone is sectioned off by two light curtains,” said Wallace. “If you broke the light barrier, the next zone would shut down.” In fact automation and robots have pushed the development of new safety techniques.

The Allen-Bradley Multizone SafeZone Safety Laser Scanner was an example. Operating on the ‘time of flight’ principle, the laser scanner emits pulses of eye-safe infrared laser light over a 190 degree arc, receiving and processing the light reflected off intrusions in the sensing field. Should an object be detected, the unit signals the shutdown of the protected machine.

“The difference between a laser scanner and a light curtain is that a light curtain has two curtains looking at each other,” explained Wallace. “(The scanner) is just one standalone device and it employs a laser that’s constantly spinning and scanning the area. It doesn’t need anything to reflect off”

Advances in safety technology have seen an improvement in the ‘intelligence’ of such systems, with equipment now able to determine what can and cannot enter restricted areas.

SICK is one company producing such equipment. “Robots have created a different set of safety awareness zones,” said the company’s safety systems product manager in the UK, Seb Strutt.

“Areas were hazardous before but, by default, humans had to operate in them and were thus more attuned to the hazards. “Now we have the opportunity to create …less hazardous factories, but also need to create enhanced safety awareness in terms of design and operation.”

Among the latest of SICK’s safety products is the C4000 selfteaching entry/exit safety light curtain and palletizer light curtains. These non-muting light curtains are used where material and machinery (such as a pallet) is transported automatically into the hazardous area, where the entry of people must be securely prevented.

The C4000 uses innovative ‘dynamic blanking’ technology to learn the profile of a pallet or vehicle transport system as enters the light curtain, says Strutt. It triggers an alarm if a person tries to enter the same area. The equipment learns by monitoring the size of the parts of an object and their separation as they pass through the curtain at speeds of up to 2m/sec.

Measurements are so precise that the curtain can tell the difference between contrasting skids and an operator’s legs, says SICK. Algorithms in the software can distinguish a person’s presence by the convergence of their legs.

There are yet more safety technologies preparing to debut. In addition to the mentioned C4000 system, SICK is also developing the V300, a camera-based solution for point-of-operation guarding. This offers such advantages as a reduced number of parts and easier, shorter installation times than traditional light curtains, while also costing less.

Suitable for rectangular openings (two cameras can be synchronized for use in larger entrances), the system requires only the cameras and reflector strips opposite the installation(s). The reflector strips form a background target for the V300 and the device has a detection capability equivalent to a 20mm-resolution light curtain. The system installs itself simply by pressing the ‘teach’ button.