Production operations have started with a new technique that promises major increases in the benefits that can be obtained through lightweighting using aluminium in vehicle body structures.

Impression Technologies (ITL) was set up a little over three years ago to bring to the market a process largely developed within Imperial College London. The technique is in question Hot Form Quench (HFQ), in which aluminium sheet is heated to a temperature in the region of 500-550°C before being pressed and rapidly cooled while still in the tool, then subjected to further heat treatment that ensures the material then reaches its full strength. Aluminium parts made in this way for structural applications in cars could feasibly offer weight reductions of up to 20% compared with lower strength cold-formed counterparts from the same material. 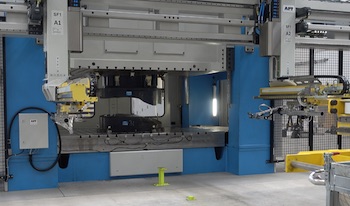 ITL has developed its Hot Form Quench (HFQ), process in which aluminium sheet is heated, pressed and rapidly cooled while still in the tool

In addition, the increased formability of the material at that temperature means that parts can be deep drawn in a single operation obiating any need for reinforcements; the removal of the requirement for secondary operations also brings a consequent reduction in tooling costs. Another benefit is that this technique enables matching left and right parts to be made simultaneously – something that would otherwise require separate tools for conventional complex aluminium pressings.

Developing the ageing processA brief outline of what is involved is provided by John Sellors, chief engineer, applications, at ITL. The production cell itself is built around a 600-tonne press from AP&T with a co-located oven for heating the sheet material, and associated automated handling equipment. Another oven, for applying post-die heating to ‘age’ – or further toughen – the material, is close by. The total cost of the setup is a “few million pounds” (the company will not be more specific) and while the intention is not that it should be a volume production facility, the installation nevertheless effectively represents what a real industrial counterpart capable of making at least a million parts a year would look like. 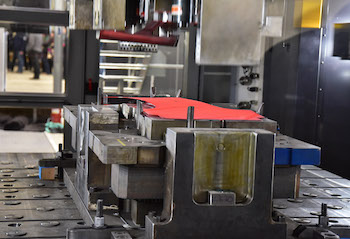 The prospects of that happening certainly seem strong. According to Sellors, the reaction of potential users to the technology when they see it is uniformly positive. “They love it,” he states emphatically. “We have never had anyone say they are not interested.” Moreover there is already real use of HFQ by an actual vehicle-maker.

Sellors explains that HFQ panels have already been incorporated by a UK-based producer of high-performance cars into one of its vehicles. Those parts, though, were not made by ITL but by the nearby operation PAB Coventry, which has had a small in-house HFQ capability licensed from ITL for the last couple of years. Nevertheless, as Sellors makes clear, that capability represents a prototyping and low-volume operation based on adaptation of existing kit. In contrast, the new installation at ITL is, he emphasises, the first ever purpose-built, “dedicated” HFQ installation anywhere in the world.

The company remains guarded about the precise details of the specific enabling technologies that the new installation embodies. In that regard Sellors’ colleague, chief technical officer Dr Alistair Foster, says that though HFQ is derived from the analogous process for boron steel, the way it has been developed constitutes ITL’s “essential IP”. He does indicate, though, that both the “heating schedule” for the material and the “press specifications” are two areas where attention has been focussed.

Solution heat treatmentThe essential features of the technique, says Dr Foster, are that “it combines a mechanical deformation process with the tempering of the material in one process.” In more technical terms, he explains, this is achieved by the fact that the temperature of the material is raised until it reaches the relevant ‘solution heat treatment’ level. At the point the alloying elements form a solution within the material and stay in solution even after the in-tool quenching process provides initially for an “unstable W temper which will naturally age to a T4 condition or which can be artificially aged to a T6 condition” – the latter being the strongest possible state for the material.

Nevertheless, Dr Foster does say that if someone familiar with the hot forming of boron steel were to view the HFQ process in action, one thing that they would immediately notice is that it makes use of a “cushion” in the press that allows for the use of a “three-part tool” approach involving the use of die, a punch and blank holder. He explains that the latter “changes the way the material flows in” to facilitate the production of more complex parts.

Reducing elastic recoveryHFQ also provides much-reduced ‘springback’, otherwise known as ‘elastic recovery’, compared with cold forming techniques for aluminium. John Sellors, again, indicates that this has important implications for dimensional control during assembly operations and is something that OEMs have indicated is of particular interest to them. “With cold-formed high-strength aluminium especially, springback can be a problem,” he states, “but with HFQ it is significantly reduced.”

Moving forward, at least one other potentially highly significant advance in the use of aluminium also presents itself as a result of HFQ – the ability to use the technique to make tailor-welded blanks. As Sellors explains, cold-formed aluminium has proven too problematic to be used in this way. In particular, the core weld properties are simply “very poor”. In contrast, he adds, HFQ provides for “very high levels of formability in the weld zone which previously would have been unachievable” and at the end of the process the weld also “recovers most of its mechanical properties.” As such, though not yet a reality, the prospect of complex, deep-drawn aluminium tailor-welded blanks “becoming a commercial proposition within the automotive industry is not too futuristic.”

Another company pursuing its own developments in the area of hot forming processes for aluminium is German press technology provider Schuler Group. This is confirmed by Mohammad Gharbi, director for technology and process development with Schuler’s die and forming technology group. “We are working on a totally new concept for the dies used in aluminium forming at elevated temperature,” he says. While he is unable to say more at this stage, he does add that relevant patenting work is now underway.

Gharbi also reveals that Schuler has been actively involved with various research institutes in Germany and also with vehicle OEMs and supplier companies in the work so far. He also outlines three particular areas that have constituted “major challenges”, including:

Further down the line, though, is the possibility of applying the HFQ process to magnesium-based materials. This is something that both Sellors and Foster are quick to caution is definitely not a near-term commercial prospect. Nevertheless, they confirm that ITL has taken part in a six-month research project, called MagHot, to explore the potential of the idea. They both agree that while the prospect is not immediate, neither is it totally unrealistic – and it certainly is tempting. As Sellors points out, if HFQ magnesium parts could be made a reality then they would offer the prospect of making parts as much as 35% lighter than even HFQ aluminium-based counterparts could achieve.

At PAB, a niche tier one supplier of steel and aluminium parts, CEO Mark Brazier confirms that the very first production parts for an on-road vehicle have been made using the process. The company adapted some existing in-house kit previously used for cold aluminium work – most obviously a 500-tonne hydraulic press – for HFQ operation. Brazier says the necessary modifications involved increasing the speed of operation, enhanced control of the ram positioning, the introduction of heating, and more intensive data logging. PAB was then able to carry out the work for that initial OEM, which he says was already aware of the HFQ process. Over about two years the company produced several hundred sets of a part, which he indicates was a bulkhead for the footwell. This involved not just actual forming operations but also subsequent five-axis laser trimming of the parts before delivery the customer.

Positive results in productionOn the basis of that experience, Brazier is unqualified in his admiration for the process. “I have never seen aluminium formed so well,” he states simply. “It forms like plasticine.” The company is also now producing an important structural part for the new Aston Martin DB11, due for its market launch at the beginning of 2017. Brazier says the contract with Aston Martin followed around 18 months of intensive development and proving work using PAB’s own HFQ setup, during which about 200 prototype parts were produced. He also indicates that PAB is in contact with at least two other niche OEMs about supplying HFQ parts to them and, in fact, already has a development project underway with one. As such, somewhere further ahead, PAB will very likely make the investment to install a dedicated HFQ cell of its own.