3D printing has been much mooted as a consumer tool for creating objects in the office or home. Mike Farish reports on a company taking this remarkable technology one step further.

An exciting new rapid prototyping tool for automotive designers has been shown off recently at a number of exhibitions in the US and Europe. Enabling the creation of lifelike 3D facsimiles of intended final car parts – particularly of interior and body shell elements – the primary achievement in this case is the fabrication of an entire, full-size model of an automotive dashboard. It has physical properties analogous to a mass-produced, moulded end-product, as well as a near identical visual appearance. But of equal – if not greater – importance is the fact that this has been achieved through the use of a relatively commonplace inkjet printing technique, rather than one of the more specialised material application methodologies commonly associated with RP, such as the laser curing of a polymer liquid resin or powder.

Multi-material mixing
The company involved is Objet Geometries, founded 14 years ago and based near to Tel Aviv in Israel. Two relatively recent developments have come together to make this particular application feasible. Firstly an RP machine – the Connex500 – was introduced that provided two distinct advances over previous equipment produced by the company. This machine was able to jet more than one material at a time, so parts and assemblies could be made of multiple materials. It could also mix base materials after they have been ejected from the inkjet head to create further “digital materials” that did not previously exist. Secondly, just last year, came the launch of a new digital ABS-like material featuring both high impact resistance and thermal performance, with a tensile strength in the range 50-60MPa (7,250-8,700psi) and an ability to withstand temperatures of 58-68°C without deformation, a figure that rises to 82-90°C with the aid of a subsequent curing process.

Ido Eylon, application manager with Objet in Rehovot, confirms that the dashboard represents a breakthrough for the company, which is currently the only outfit worldwide to supply RP equipment based on inkjet technology. The complete unit measures 1400x50x20cm and weighs roughly 5kg. That is far bigger than the Connex machine can make in a single operation – its working envelope is 500x400x200mm – therefore the complete dashboard had to be fabricated in sections, which were subsequently glued together in a purely manual operation. Eylon says that he is not aware of anything bigger made using the company’s technology. But just as important as the unit’s size is its composition; it is made primarily from the new ABS-like material.

Eylon confirms that the material is one of the company’s digital materials and is made from two base materials with different but complementary properties. One of them, says Eylon, combines a “low heat deformation temperature with good mechanical properties”, while the other is the precise opposite; “brittle but with good thermal performance”. The trick of the digital RP process, he continues, is to combine the desired properties of the two base materials while obviating their respective weaknesses. Eylon adds that the final unit also makes use of three other base materials for detailing: one that is clear; one that is white, rigid and opaque; and one that is flexible. And he confirms that total production time for a single prototype unit – from the receipt of design geometry in electronic format through RP processes, assembly and painting – was about three weeks.

StreetScooter project
While the dashboard itself might be innovative, the StreetScooter project of which it forms just a part is equally interesting. This initiative, spun out of the University of Achen near the western border of Germany, aims to develop an affordable, efficient electric car for urban use. In fact, two vehicles are involved: a two-seater passenger version, provisionally named the A12, with a four-seater derivative already being mooted; and a delivery van variant called the B14, being developed specifically for use by the German post office service. 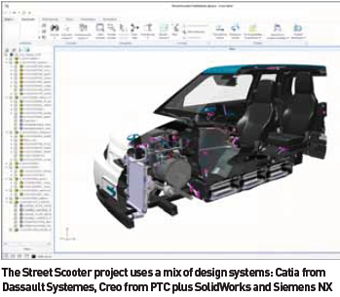 What distinguishes the project, though, is not just the type of vehicle it is aiming to develop but the way it is structured, with a series of decentralised work groups taking responsibility for the development of different elements of the vehicle – an approach in which technology, in this case that for product lifecycle management (PLM), is also playing a key role.

The project can trace its roots back to a concept idea that originated several years ago within the university – origins that are still evident in the fact that its chief executive officer, Professor Achim Kampker, also remains in post as a professor of production engineering within the university. However, as project manager for the passenger vehicle Fabian Schmitt explains, a commercial enterprise – StreetScooter gmbh – was formed two years ago and now employs about 20 people in premises close by the university. In development terms, there are nine working groups responsible for the vehicle’s body, exterior, interior, chassis and safety, powertrain, battery, thermal management, electronics and wiring harness, and closures.

According to Schmitt, the working methodology is that each group has been given technical objectives and a timetable, but has been left to work out for itself how these will be achieved and, importantly, how much money they will spend doing so. “They are responsible for their own budgets,” he confirms. This deliberately loose organisational structure is paralleled on the technical side by a similarly permissive attitude to the use of CAD technology for the generation of design information.

As Schmitt explains, in contrast to the approach used by the mainstream car industry – in which a single master CAD format is specified – as many as four different design systems are used throughout the project. For the most part these are the Catia system from Dassault Systemes and the Creo (formerly Pro/Engineer) system from Parametric Technology Corporation (PTC). But he adds that some work is also carried out in the SolidWorks and Siemens NX systems.

Consequently, the project found itself in need of an appropriate means of ensuring overall coordination and management of both data and activities. It has found this through the implementation of another PTC system – the Windchill data management system – that forms part of its overall PLM package. Schmitt says that use of the software by the central organisation in Achen is essential to the effectiveness of the project as a whole. “It provides us with a common development platform,” he states, which ensures there is a “single source of truth” despite the heterogeneous collection of design data generation sources in use by the organisations involved.

The way that CAD is handled is obviously of crucial importance. Schmitt says that, irrespective of the source format, the Windchill system stores the data in its own internal PVS format, which can be accessed for review purposes by any of the participants using a related PTC product called Creo View that is downloadable for free. Hence the project manages to reconcile dispersed data generation in varied formats with centralised storage and management, not least in terms of version control, so that all participants work with an up-to-date version of the complete assembly. This whole approach, says Schmitt, is “very unusual” in the context of established automotive industry practice.

One fundamental aspect of the project is quite mainstream – the exterior and interior styling of the vehicle. Schmitt says that the project consortium brought in Nils Poschwatta, former in-house designer for Volkswagen. Two prototypes for the vehicle have been produced and according to Schmitt, negotiations are underway to place a contract for volume manufacture, with a target date for the S.O.P. of the passenger vehicle set for late 2013 and the delivery van due to follow in 2014. The ultimate aim, he says, is to achieve sufficient economies of scale in production to enable the cost of the vehicles to be “no more than a comparable petrol-driven car” and ideally substantially less. Schmitt cites a figure of as little as €5,000 plus battery hire for the initial version of the passenger car.