The latest high-speed, high-functionality cameras are in demand to help automate vehicle production 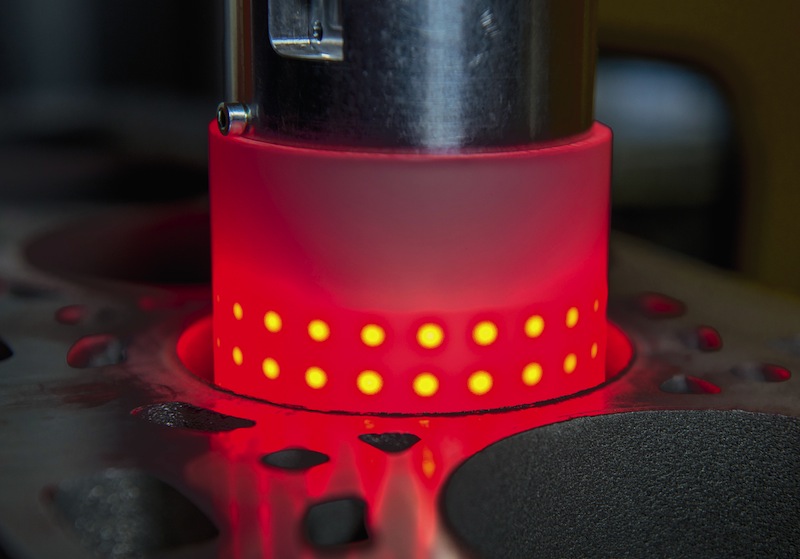 Although the idea of a robot with ‘eyes’ sounds futuristic, the International Federation of Robotics confirms that as long ago as 1980, vision technology helped a robot to pick a randomly orientated component from a tray. The demonstration took place in an academic environment and subsequently instigated an industrial quest to develop the technology for use on the shop floor. Some 35 years down the line, machine/robot vision is increasingly common across the industrial world, with the latest cameras offering megapixel resolution, full colour and 3D capabilities.

From the very beginning, measurement and inspection were identified as principal areas that could benefit. In the automotive sector, the potential list of applications is vast, but arguably the most important relates to joining – namely, the inspection of weld seams and adhesive beads. Regarding the latter, the automotive industry uses adhesive bonds in fully automated window assembly. These must be 100% defect-free in order to meet the requirements of function, safety and aesthetics. [sam_ad id=17 codes='true']

Delivering a 360° view
With this in mind, one of the latest innovations – the SeamStar 3D from ISRA Vision – is now available with an optimised optical and technical set-up, enabled by a new supporting structure made of 3D-printed material. The design is said to make SeamStar 3D the world’s first sensor to feature an all-around view, thus delivering 360° inspection of adhesive beads.

SeamStar 3D is fixed directly on the application nozzle. Due to the 3D printing process, it has a shape which could not be realised by other manufacturing methods. The sophisticated housing of temperature-stable material provides space for four cameras with one mirror each. This creates a total of 16 virtual images for inspection, thus enabling the sensor’s 360° view field. An advanced illuminating unit is also integrated, providing even lighting under any conditions and consequently allowing efficient inspection which is accurate down to a fraction of a millimetre.

The 360° inspection ensures that sealants and adhesives are applied continuously and in full, in the correct position and with geometric precision. SeamStar 3D does not only inspect the continuity of the bead on the basis of its width, but also in relation to its height (up to 15mm), owing to 3D technology. In addition, the sensor supplies results for all types of adhesive seams, including seams with triangular sections and of dark colours, which have so far been a challenge for inspection.

However, weld seam inspection is one of the most prevalent vision tasks, which means a stream of camera-based innovations are coming to market almost constantly. Among the latest are the new generation of VIROwsi optical weld seam inspection systems from Vitronic. VIROwsi is said to require up to 75% less energy, is more compact and easier to use, and features 3D analysis.

The system, which is used by OEMs including Daimler, enables customers to identify potential quality and process deviations at an early stage; the bottom line is that costly recalls due to quality and machining deficiencies in relation to weld seams can be averted. Even special requirements such as the inspection of highly reflective aluminium or complex and diverse weld seam geometries are satisfied with reliability, says Vitronic.

Incidentally, the process is much faster than the actual weld process, so there is no negative impact on cycle times. Furthermore, during the software set-up process, all relevant parameters such as the inspection procedure, thresholds and criteria are configured for specific production requirements.

Particular features of the Vitronic system are the visual user interface for intuitive operation, faster access to relevant information, quicker entry of production target values and informative statistics. Three-dimensional displays of seam sizes and defects (such as pores and holes) can also be documented and archived automatically, as can a number of relevant inspection results.

In another development, Vitronic is also offering robot inspection cells with machine vision as a single-source inspection solution that can be integrated directly into existing production lines. Robot cells with the Vinspec surface inspection system detect faults and defects on visible, sealing and functional surfaces, as well as contour and surface imperfections on metallic components.

When used in conjunction with camera-based surface and contour inspection, the system automatically detects defective components in the production process. Applications include the inspection of crankcases (cylinder running surfaces) and cylinder heads. Vinspec records even the smallest of defects using high-resolution matrix and line scan cameras. The intelligent image acquisition technology prevents ‘pseudo defects’ caused by dirt or spots of water on components, says Vitronic. 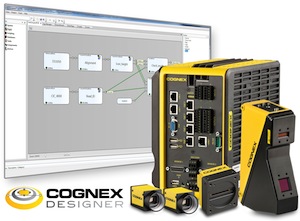 Improving quality control
Robots with vision capability have long been the ‘dream’ for automotive manufacturing engineers, and today there are numerous examples of this technology in action. For example, TM Robotics says it has provided Dinalot, an automotive component manufacturer near Bilbao, Spain, with a cartesian robot cell to improve production. Working in conjunction with a machine vision system in a QA role, the robot has reduced component rejection on a high-speed line that makes metal discs for use in vehicle fuel injection systems.

There are five versions of the metal discs, which incorporate six tapped and countersunk holes. Before the process was automated, an operator checked the diameters of the holes and their positions relative to a central notch. This time-consuming process involved selective sampling and, as a result, passed through some non-compliant parts.

The new system uses two vision sensors on a robot arm and a rack-mounted PC. The computer controls the sensors and robot, and displays the inspection images and measurement results. In terms of the process, the parts arrive at the inspection station after passing through a cleansing bath. Each component is picked up by the robot arm and placed on a surface backlit by LEDs. The first vision sensor locates the positioning notch and the arm moves it to the correct point above the part. The sensor then calculates the position of each hole relative to the notch (to an accuracy of ±0.01°), and measures their diameters (to an accuracy of ±0.02mm).

The second sensor inspects the inside of each hole to check the number of threads and measure the width of the grooves. Parts that pass the tests are placed on a stacking device, while failed components are sent to a discard container. The cartesian robot also palletises the inspected parts.

Steadying the process
Another successful application of vision technology can be seen at the Shanghai plant of TRW Automotive, where several automated vision quality routines have been implemented for tasks that include the checking of component positioning on assembly lines, part length and angle measurement, plus coating integrity.

Recently, the plant faced a requirement relating to the assembly of brake parts. Since the conveyor assembly line vibrates at high speeds, it caused the components to shake, leading to human errors such as incorrect assembly or missing parts. The solution was a new assembly line with a rotary table design using six Microscan Vision Hawk smart cameras and Visionscape machine vision software, along with two QX Hawk imagers to decode barcodes for component and product traceability. Microscan’s Nerlite Hi-Brite industrial lighting is used to assist vision detection.

Microscan’s machine vision software platform, Visionscape, provides a full set of vision tools and can be connected to a PLC or other industrial control systems. At TRW, various image processing tools such as image rotation and warping, grayscale morphology, along with calibrated dimensional measurement tools are deployed in the automated inspection and assembly process. ‘Mask Tool’ functionality is also used to shield parts that do not need to be inspected, which helps to eliminate rejection due to false negatives.

In the assembly process, five feeders transport five different components to be processed. The QX Hawk industrial imager reads the code on the housing and three robotic arms are used to place the components inside. The machine vision system then checks the quality and ensures correct assembly. It also checks that there are no air bubbles in the glue used for sealing to ensure coating integrity, before the products go into an oven.

In addition to making sure that the individual components are inserted into their correct positions, the vision system checks solder position, the sealant and cooling gel position, and gel coverage rate on the cover. Compared with manual inspection, the machine vision and barcode reading system offers improved accuracy, higher consistency and non-stop operation.

Checking safety-critical components
Also on the subject of brakes, an image processing system at the Aldersbach facility of Knorr-Bremse in Germany is being used to check the correct mounting of disc brakes for trucks and buses. In order to cover all 1,200 types of disc brake in combination with 64 inspection characteristics, the system is equipped with intelligent software and a connected database.

While three cameras and two line lasers focus on the brake, the corresponding software calculates within milliseconds whether the disc brake is mounted correctly according to the specified parts list and assembly guidelines, thus ensuring its operation in the vehicle. Additionally, the database contains information about whether a possible defect can be eliminated by reworking. Knorr-Bremse opted for an image processing system from Neupro-Solutions, implemented in collaboration with Allied Vision Technologies' distributor Stemmer Imaging. 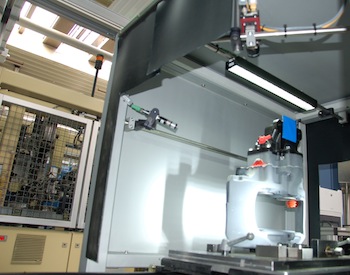 Since brakes are components requiring documentation, both image data and inspection data are archived in a database before being transferred to a higher-level control. Neupro also delivered the PLC interface, from where Knorr-Bremse recalls the data for further processing in the host computer.

However, first of all the corresponding data from the disc brake production must be collected in the test cabin. This is facilitated by three AVT GigE Vision cameras equipped with Schneider lenses and two line lasers by Z-Laser in combination with Sherlock image processing software from Teledyne Dalsa.

The cameras selected are two Manta G-504C and one Manta G-146C colour cameras with power-over-Ethernet capability, while a Neupro-Sherlock plug-in for Oracle transfers data to the database. The individual check algorithms are global and are recalled via the database using the part number. In addition, it is possible to statistically evaluate the measurement data stored in the database and to perform an approximation within threshold values.

To reduce the size of the image data, the system combines three original images, compresses them to jpg format and saves them together with the serial number. "If necessary, all documents for the searched brake are thus available within seconds,” says Bauer. “We therefore know exactly which parts are mounted, thus ensuring traceability down to each individual screw.”

Getting a handle on inspection

A vision system was required to check for a number of key criteria, including: the presence of the correct combination of parts in terms of left/right hand handles, and two-door and four-door sets; confirmation of chrome or standard paint finish; correct positioning of handle components including the closure and cap; matching of the handle type with the manifest sheet; and correct seating of the handles in the inserts before final delivery.

The machine design is based on a manually loaded station with an automatic conveyor feed to present the boxes to the cameras, a conveyor area for rework and an out-feed for good products. For the inspection process, the box is required to stop in the centre of the machine where the barcode manifest on the side of the box can be read via the vision system. This gives the settings of the current product type to the machine PLC, which in turn triggers the correct check routine within the vision system for inspection of the particular handle. 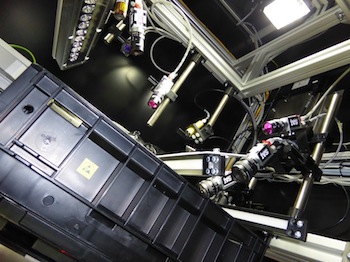 Four high-intensity, white LED line lights and lasers are mounted obliquely to the box requiring inspection. Following the inspection process, the machine automatically marks a good part with an ink marking system on the label. This is then verified to check it has been marked correctly by the vision system before final release down the pass conveyor.