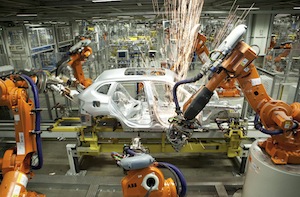 I don’t usually do end-of-year round-ups, but the events of the previous 12 months posed a question that is worth considering as we begin a new year: was 2015 a good one for automotive manufacturing?

The figures would suggest that the answer is ‘yes’. China’s automotive market continued to grow, albeit at a reduced rate, and North America boasted record sales and production figures as its market rebounded strongly. Elsewhere, India and Europe saw increased sales and production as confidence slowly returned. Also, investment in existing and future manufacturing facilities would appear to be very healthy. So far, so good. However, not all the markets proved so fruitful.

Going back to China for a moment, the country’s stock market experienced something of a crisis which saw a communist state trying to bolster a capitalist system. The impact of this didn’t seem to affect vehicle manufacturing, but it perhaps revealed the fragility of China’s economic growth – which, lest we forget, has been a major contributor to the fortunes of almost all the major carmakers.

Such events are often reported as ‘wobbles’ or ‘bumps in the road’ – and if that was the case, then Russia hit a major pothole. A number of factors (falling oil and gas prices, and economic sanctions) last year resulted in a sharp decline in vehicle sales and a consequent reduction in domestic vehicle production. Brazil also saw its stagnating economy take a toll where vehicle production was concerned.

Moving away from the figures, 2015 saw some distinctly challenging times for a number of OEMs. GM’s ignition-switch scandal highlighted systematic failings in dealing with faults and recalls. Toyota also suffered from a string of quality issues which have undoubtedly damaged the OEM’s reputation for reliability; the price paid for pursuing ever higher volumes. VW (you knew I was going to get to them eventually) fairly demonstrated how to go about ruining a company's reputation. Having said that, the longer-term damage has yet to be felt by the German OEM, and it would be foolish to bet against such a strong brand.

My conclusion is that 2015 was a great year for vehicle manufacturing, and the proof is in the pages of our January-February issue as we start out into 2016. We have some fascinating features covering the innovative application of new materials in powertrains, additive manufacturing and how Industry 4.0 could transform vehicle production. Throughout last year, we published stories covering the best innovations in processes, technologies and materials – and we look forward to doing more of the same in 2016.