BMW sees into the future 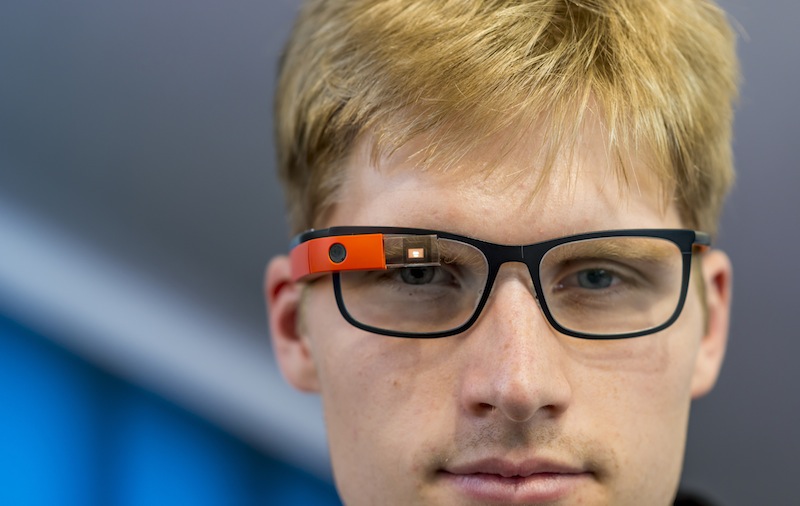 The fourth industrial revolution is upon us. At least that’s what the German government believed when it coined the term 'Industry 4.0' to refer not just to increased industrial automation, but also cyber-physical systems, the Internet of Things (IoT) and the ever-growing link between the virtual and physical worlds in manufacturing. The BMW Group has taken an active role in the promotion of Industry 4.0 through its involvement in some of the German government’s research projects in this area. These include Cyber-Physical Production Systems (CyPros), which aim to improve productivity and flexibility through the integration of intelligent systems in factories, and ReApp, which promotes flexible robot-based automation solutions.

Saskia Essbauer, spokesperson for production at BMW, explains the OEM’s strategy with regard to Industry 4.0: “As the digital and physical worlds are growing closer together, new opportunities are arising that are enabling people to cooperate more. We at BMW recognised the opportunities that Industry 4.0 can deliver early on, and that is why we have participated in the government’s research projects.

“In the scope of these projects, several of our research and industry partners are working on new and innovative topics and testing the benefits of their application in real life. But we still need to step up our efforts and develop specific applications of practical relevance, as well as defining industry standards.”

To ensure that the company can innovate rapidly in this area, it has set up a range of in-house technology projects across several plants in Germany and the US. One of the most recent and futuristic examples is the use of Google Glass devices at its analysis centre in the Spartanburg plant, South Carolina. The augmented reality, wearable technology is currently being used in the production of BMW’s pre-series vehicles which serve as a kind of prototype to allow the company to discover any flaws before full production.

The ‘smart glasses’ are fitted with a camera that allows quality assurance employees to take photos and record videos which they can add to their reports to achieve greater accuracy than handwritten notes. Two-minute video clips can be stored on BMW’s servers for subsequent discussion with engineers. In addition, personnel can communicate by voice and sign off test plans while still at the vehicle.

This is in contrast to the previous method, where testers had to move between the car and a stationary computer terminal. Given that between ten and 25 individual tests have to be completed per car, this was time consuming and inefficient.

The Google Glass project started a year ago and is currently in the pilot stage. Although the technology is currently being used only for pre-series vehicles, BMW says the results have been so promising that it is considering implementation in the final assembly of series vehicles.

Cameras for clarity
Google Glass is not BMW’s only Industry 4.0 project focused on using cameras in quality control to eliminate the time it takes workers to move between different workstations. A pilot project involving a camera-based gesture detection system has been deployed at the Landshut site in Germany. This allows workers to check the quality of bumpers between paintshop and assembly in a reliable and efficient way that ensures peak accuracy.

“In order to achieve a 100% level of accuracy, each deviation from the target is recorded in a system and evaluated,” says Essbauer. “Previously, workers had to document the result for each component they checked at a workstation. This way of working cost valuable time, especially in cases where the PC could not be mounted directly at the test bench and people had to walk to a different workstation to feed in the data. If several faults appeared at different positions at the same time, the documentation became more complex, with workers being required to remember several details very precisely.” 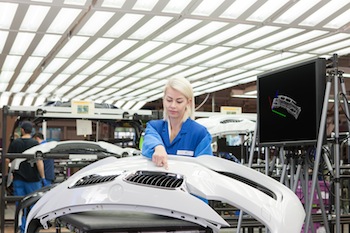 BMW worked with the Fraunhofer Institute in Karlsruhe, Germany, to develop the system. A number of different gestures can be recognised, for example a wiping motion which means that the bumper has no quality issues and is ready for assembly. To register a fault with part of the bumper, the tester points his or her finger at the relevant section. The camera registers the gesture, then the program evaluates it and stores the information for follow up.

“The workers have responded very positively to the new technology,” states Essbauer. “The gesture control system is simple and easy to understand and can be applied intuitively, without requiring extra training. People do not have to walk to other workstations anymore and, as a result, can concentrate better on their work. Other advantages include the speeding up of the testing process, more precise data entry, no disruption of workflow and the fact that our employees don’t have to use additional equipment, such as special eyewear or microphones.”

Intelligent energy management
While quality control is key for any automotive manufacturer and an important focus in Industry 4.0, Essbauer is keen to stress the pivotal role that the workforce plays and how BMW projects are benefitting employees: “We are working on a ‘big data’ approach to improve energy efficiency at our plants in Spartanburg and Leipzig in Germany, as well as the application of mobile communication technologies to support production workers,” she says. “The main objectives are to increase quality and to take some burden off the shoulders of workers at the plants, for example by improving ergonomics in the workplace.”

The ‘big data’ approach to energy efficiency that Essbauer mentions is being achieved through the introduction of an intelligent energy management data system (iEMDS), which was piloted at Spartanburg for the production of BMW X models. The system is based on intelligent electricity meters which constantly measure the energy consumption of production facilities and robots so as to align them with the company’s central ‘big data’ network. Spartanburg has now installed smart sensors in more than 80 units of production equipment and robots.

This system has also been rolled out across the Leipzig, Regensburg, Munich and Landshut plants in Germany, and there are plans to implement it at more plants in BMW’s global production network. Projects are currently under way at 30 sites in 14 countries. “BMW will benefit from lower energy consumption, greater reliability in production and higher product quality thanks to the implementation of iEMDS across our production sites,” says Essbauer.

BMW predicts that it will save €25m ($30m) in energy costs over the next decade due to the implementation of iEMDS. The company says the system has already resulted in total energy savings of more than 100,000kWh in the year it has been up and running.

Pointing to enhanced ergonomics
BMW is also running ergonomics projects in relation to Industry 4.0. In mid-2014, the vehicle-maker introduced a flexible ‘finger cot’ which protects workers against excess strains on the thumb joints while carrying out certain assembly activities. This initiative is in pilot stage at the plant in Munich, Germany.

Developed in cooperation with the Department of Ergonomics at the Technical University of Munich, each finger cot is a unique item, designed and customised to fit the size and shape of a worker’s hand – and made using 3D printing. “In initial practical tests, the feedback from workers was very positive,” says Essbauer. “We are currently looking into how these assembly aids can be applied as standard tools in other areas of production.” 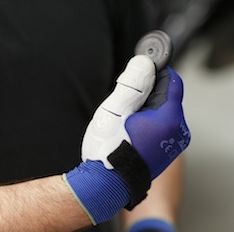 This feedback from workers is regarded as vitally important, because BMW’s Industry 4.0 strategy focuses heavily on the workforce and developing new technologies that will assist its personnel in production and production planning. “Supporting workers through automation is a particularly good approach when it comes to simple, highly repetitive tasks which require considerable physical strength,” Essbauer explains. “Robots that assist humans in production and take the heavy work off their hands will characterise the factory of the future.”

Again acting as BMW’s pioneer, Spartanburg became the first automotive production facility in the world to implement direct human-robot cooperation in series production. The installation of collaborative robots at the plant has lightened the workload of assembly line personnel while also ensuring maximum production quality.

“The successful implementation of an ergonomically optimised human-robot cooperation in series production is a major step towards the future of automotive engineering and the world of Industry 4.0 – Saskia Essbauer, BMW

Man & machine teaming up
“In door assembly, people and robots work side by side – without a safety fence – in one team,” explains Essbauer. “Four collaborative robots equip the insides of the doors of BMW’s X3 models with sound and moisture insulation. Firstly, the foil with the adhesive bead is put in place and slightly pressed on by assembly line workers. Prior to the introduction of the new system, workers then carried out the fixing process by means of a manual roller. Today, systems with roller heads on robot arms handle this labour-intensive task, which requires maximum precision. The sealing protects the electronics in the door and the entire vehicle interior against moisture.”

The preliminary work for this futuristic application of collaborative robots was provided by the Innovation Management Production team at the BMW Research and Innovation Center in Munich. Developed over two years, the project was carried out in close cooperation with Universal Robots of Denmark.

According to Essbauer, BMW decided to introduce assembly robots at the plant for ergonomic reasons, but safety was always a priority. “Automation as a means to assist staff is particularly suitable for simple, highly repetitive work which requires considerable strength,” she says. “The direct interaction of man and machine necessitates top security standards as the robots are placed in the workers’ direct surroundings without any protective devices.”

She explains how the robots work: “They run at a low speed within a defined environment and are stopped immediately in case their sensors detect an obstacle in their way. Thanks to the fully automated process, the rolling power applied to the fixing process can be measured exactly. As a result, the processing quality can be monitored on a permanent basis. In the case that the robot’s work process is interrupted unexpectedly, a worker carries out the fixing procedure manually again, just to make sure.”

BMW is evaluating further applications of collaborative robots in assembly, and the roll out of this particular project to other plants in the production network is currently in the planning stage. “The successful implementation of an ergonomically optimised human-robot cooperation in series production is a major step towards the future of automotive engineering and the world of Industry 4.0,” concludes Essbauer.