As production of the 2017 Acura NSX ramps up at the dedicated Performance Manufacturing Center in Ohio, AMS investigates what technologies and processes are required to generate a finish fit for a supercar 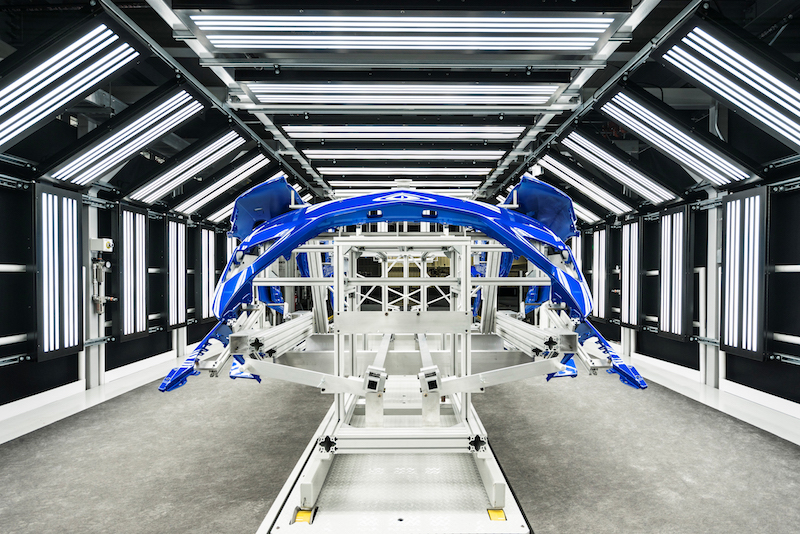 A Japanese supercar is being manufactured in rural America. The first-generation Honda NSX, which is sold under the Acura brand in the US, was conceived as a cheaper and more reliable alternative to European supercars; Ferrari performance for the budget-conscious. This NSX became the world’s first mass-produced car to feature an all-aluminium body and, as a showcase of Honda’s technology and craftsmanship, it was manufactured exclusively in Japan. So when Honda announced that it would be producing the second generation of this supercar at its Marysville Auto Plant (MAP) in Ohio, it caught many by surprise. In order to do so, the company has spent $70m refurbishing an existing MAP building to create what it calls the Performance Manufacturing Center (PMC).

This facility is constructing the Acura supercar entirely in-house and, much like the NSX itself, it is a clean-sheet development. The building will also double as a customer reception centre. As such, its interior comprises pristine white walls, gleaming floors and vast swathes of glass. The PMC would put many Formula One teams to shame and seems to embody Honda’s philosophy: this is where dreams are born.

“By putting the paintshop in the middle of assembly... our team is included in the rest of the operation and paint is now a showpiece for customers and guests” – Werner Wilson, Honda PMC

Its main purpose is to produce vehicles to the highest standards possible, and Honda says that the PMC has been designed in such a way as to exploit both automation technology and the skill of its 100 or so operatives, almost all of whom are MAP veterans. Built specifically for low-volume manufacture, the facility will follow a gradual ramp-up to reach a daily output of eight to ten units per shift. At the time of writing, series production was scheduled for late April.

While the spaceframe remains black, the body panels are painted separately before installation, preventing damage

Construction of the paint areas of the PMC took approximately two years from 2013 to 2015, including the remodelling of the existing structure and the electrocoating (e-coat) expansion to the building. The total paint area, comprising both the frame and the body line, is approximately 5,575 sq.m. Unusually, the paint area is enclosed in glass. Paint technical leader Werner Wilson explains: “By putting the paintshop in the middle of assembly and incorporating it into the plant, our team is included in the rest of the operation and paint is now a showpiece for customers and guests.”Tackling supercar specificationsThe painting operation must overcome two key challenges. The first is obtaining a true supercar finish. The NSX is available in eight colours – Curva Red, Berlina Black, 130R White, Source Silver Metallic, Casino White Pearl, Nord Gray Metallic, Valencia Red Pearl and Nouvella Blue Pearl – which is a significant number for low-volume manufacture. “We are committed to delivering a gem-like finish that will exceed customer expectations,” adds Wilson.

The second is the NSX’s multi-material construction. The supercar’s chassis and body still feature extensive aluminium, but this is now supplemented with ultra-high-strength steel for parts such as the A-pillars, and the floor is made of carbon-fibre-reinforced plastic (CFRP). The roof can be aluminium or CFRP, depending on the customer’s specification, and the other exterior panels are made of aluminium or sheet moulding compound. This throws up the challenge of providing suitable grounding for all of the different substrates, says Wilson, in order to prepare them for electrostatic spraying. Acura therefore requires all incoming materials to feature a conductive primer.

Painting carefully and cleanlyThe paint process begins when the metallic parts and the fully assembled spaceframe head to an automated pretreatment e-coat system developed specifically for the NSX by Therma-Tron-X. The system comprises a number of tanks into which these components are dipped.

The first tank contains a caustic cleanser, which is used to remove oils and other contaminants. Then the parts are lowered into two reverse osmosis (RO) water baths before heading to a tank containing a zirconium-based material, rather than the zinc phosphate pretreatment which is conventionally used to protect metals from corrosion.

Such pretreatments are increasing in popularity because they do not contain the heavy metals – for example, zinc, nickel and manganese – that are found in phosphate baths, which reduces water usage and the amount of waste to be processed into non-hazardous sludge and taken to landfill. Furthermore, zirconium oxide covers the metal with a uniform film rather than the crystalline structures produced by phosphate systems, potentially improving corrosion resistance. According to Wilson, the use of zirconium is cost neutral for Acura.

The application of the pretreatment is followed by two further RO rinses, then the spaceframe is dipped three more times: e-coat paint, a permeate rinse and an RO rinse. Adjacent to these tanks are two ovens where the primer is baked for approximately one hour at 170°C.

A mastic sealant is then applied to the spaceframe by one operative using a rotisserie fixture, which enables the structure to be elevated and rotated through 360° so that the worker can comfortably reach every potential ingress point for water and dust. The rotisserie is unique in that it allows the frame to be attached from one side for efficient loading and unloading; Acura has applied for a patent covering the design. A drum ram pump is used to supply the sealant to a gun, and the application is manual. An acoustic spray foam is also applied to the frame by hand using a shot meter. 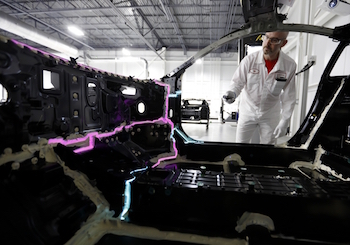 Shining a light on qualityA light-guided checking system has been developed for the PMC that enables the quality of the sealant application to be assessed for every unit. These coloured lights are projected onto the spaceframe, and each colour indicates the nature of the sealant required, where it should be applied and the quantity to be used.

As the spaceframe remains black, the body panels are painted separately and ferried through the paintshop on a carrier. Wilson says that this method ensures good coverage and that the paint wraps around the edges of these parts. Fitting the body panels after painting also minimises the potential for these components to suffer from dents and dings, and helps to ensure a good fit when they are fixed to the spaceframe. Furthermore, the position of the parts can be optimised for the reach of the four six-axis, column-mounted Dürr robots which apply the paint via electrostatic bells. Two are used for the primer and clearcoat and two are used for the basecoat; up to five coats of basecoat and four of clearcoat are applied.

Stringent paint metering occurs at the head of each robot, where a ratio of plus or minus 1% catalyst and resin is mixed to ensure a high level of quality. Computerised paint mixing, using a weight-based mixing scale, ensures that colour is controlled precisely for each NSX that moves through the line. Operatives check the work of the robots, making adjustments where necessary, and some small parts – such as parking sensors – are painted by hand. The entire process takes up to two days and an indirect-fired, three-zone oven is used to bake the parts. Finally, the painted components are inspected individually in detail by an operative using light-emitting diode inspection lights to ensure that the finish is up to scratch, before they are signed off for assembly.

What next, after the NSX?While the technologies employed in the painting of the NSX have been optimised for small-volume, high-quality manufacture, Wilson says that the zirconium e-coat process and the light-guided sealant checking system may be applied to other Acura vehicles. This is significant, given that Honda is currently investing $210m in the construction of a state-of-the-art paint line at MAP. Honda says that the new, 27,870 sq.m MAP Line 1 will employ a variety of technologies to reduce energy consumption, water use and chemical emissions associated with the paint process while improving the quality of Honda and Acura vehicles produced at the plant. When complete, it will be the most energy-efficient paint line in Honda’s US vehicle production network. 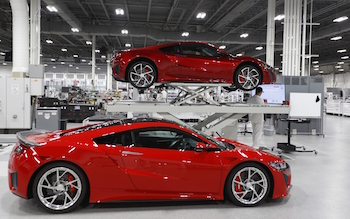 The new paintshop will use a more compact and energy-efficient four-coat, two-bake short process rather than the four-coat, three-bake used on the current line, thus eliminating the need for one primer-coat curing oven. To facilitate this shorter process, the line will also use 2K waterborne primer designed exclusively for Honda in conjunction with its paint supplier. The combination of the 2k waterborne primer coat and a waterborne basecoat will reduce volatile organic compounds by nearly 66% compared with the existing operations on Line 1.

The paint line will also employ dry-booth technology, whereby limestone dust in place of water captures paint overspray, reducing water use by 2m gallons annually and eliminating more than 255 tonnes of paint sludge. Furthermore, the booth will reduce CO2 emissions by 18% or 12,000 tonnes per year. Based on Honda research, the new MAP Line 1 will be the highest-volume application of dry-booth vehicle painting technology in North America. It will be interesting to see if any methods pioneered at the PMC with the Acura NSX supercar will join these technologies at MAP Line 1, or any of Honda’s future painting facilities.