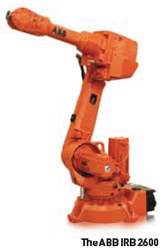 Designed to replace the IRB 2400, one of ABB’s most popular industrial robots, the IRB 2600 offers improved stability and accuracy. With what is said to be the best accuracy in its class, the IRB 2600 helps to increase output, introducing higher process speeds and lower scrap rates for improved productivity. This is particularly important for machine tending, material handling and arc welding applications.

Capable of being inverted, wall- or shelf-mounted, the IRB 2600 can reduce occupied fl oor space and improve machine access. This is the first time that a robot of this size can be wall-mounted. These features, coupled with its improved working range, enable more productive cell design.

Another key feature of the IRB 2600’s compact and optimized design is a body weight of less than 300kg. With the same footprint as the IRB 4600 – the first robot to be launched from ABB’s ‘sharp generation’ range – its small footprint makes it easier for the lower arm to reach straight downwards, providing improved access for more flexible production.

An ideal choice for targeted applications such as arc welding, material handling and machine tending, the IRB 2600 is available in three versions: two short-arm versions (1.65m) for 12 or 20kg payloads and a long-arm version (1.85m) with a 12 kg payload. The IRB 2600 also delivers the maximum acceleration achievable in its class. With high maximum speeds achieved through the use of the patented QuickMove motion control software, this model can return increased production capacity and improved productivity, reducing cycle times by up to 25%.