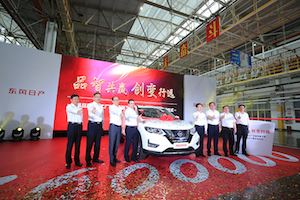 China - The first Nissan X-Trail has rolled off the production line at Dongfeng Nissan's Xiangyang plant, which is located in the northwestern part of Hubei province. At the same time, the facility, which was Dongfeng's first to be built back in 1983, recorded the milestone of making 1.6 million units since it started operating.

The X-Trail is also made at the Dongfeng Nissan plant in Zhengzhou, which is the capital of the Henan province. This plant was previously used to exclusively produce light commercial vehicles (LCVs).

Hao Chen, deputy managing director of Dongfeng Nissan has said that production of the crossover in Xiangyang "further enriches the product lineup of the Xiangyang base while optimising Dongfeng Nissan's production structure layouts and alleviating the market condition of short supply of the hot-selling model."

Dongfeng and Nissan plan to increase their annual sales in China from 1.5 million in 2017 to 2.6 million by 2022. They are among the many companies hoping to take advantage of growing demand for vehicle electrification in the country, and are aiming to launch 20 new electrified models over the next five years.