A bus to the future

Chinese entrepreneurial bus company, Greenautoo, is preparing to launch of a series of smart, safe and green vehicles that could be the solution to big city traffic congestion, write Jan Hökerberg and Crystal Yan. 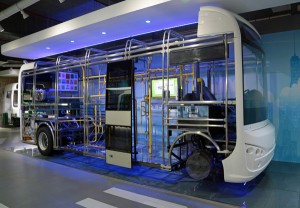 Bus travel is often a nightmare for China’s many millions of commuters, especially in rush hour. The traffic is congested, the speed is slow and the air heavily polluted. Even if China’s rapid on-going urbanisation – a government scheme to move people from rural areas into the cities – has led to better opportunities for new city dwellers to get jobs, to earn more money and to consume more, it has also created major problems in terms of growing traffic congestion and less mobility. However, the solution for the future could actually be the bus. All over China – the world’s largest bus market – local governments, bus companies, entrepreneurs, environmentalists and scientists are all involved in a race to create more modern and sustainable above-ground bus transportation systems.

In 2014, Mr Chen Xuan, a former manufacturing and marketing executive at several big bus companies, gathered together a core team of Chinese bus specialists to form a company that will create cutting-edge, light, green and smart city bus solutions for the immediate future: “We are not asking people to give up their cars, but we want people to use public transportation more and more,” says Mr Chen, CEO of Changzhou Greenautoo Union.“People who drive cars have comfort requirements, and today, traditional buses obviously cannot satisfy those needs. We will transform the exterior of buses and improve interior comfort so that more people leave their cars at home,” he adds.

Starting with a Smart Minibus
In 2013, sales of large, medium-sized and light buses in China totaled 477,000 units, up some 12% from 2012. China’s demand for new large- and medium-sized buses is around 200,000 every year, accounting for one-third of global demand: “We’ve paid close attention to this huge market for a long time and the main trend in bus development has now shifted to electric and hybrid buses. In 2013, there were about 10,000 such buses, but just one year later the number increased to 40,000,” says Mr Chen.

Greenautoo is concentrating on city buses and has designed a series of vehicles. The company’s first prototype is the Smart Minibus, 6-metres long, light, modularised and running on new energy.
“Our Smart Minibus concept has a closed architecture that comprises five circular structures that are made of high-strength steel from SSAB, with composite materials used to link each part. A Smart Minibus will be 25-30% lighter than a traditional bus, which means it can use smaller engines and carry more people,” says Mr Chen.

James Wang, a Greenautoo consultant and professor at Chongqing Jiaotong University, has studied China’s public transportation for 20 years, and is very familiar with the development of the industry both in China and in Europe.

“The European Union (EU) Framework Programme for Research and Technology Development will bring revolutionary changes to the traditional bus industry, which has been high cost and based on old-fashioned technologies. We want to put advanced technologies and solutions together,” says Professor Wang, who thinks that China can learn from, for example, the European Bus System of the Future (EBSF), an initiative that aims to develop a new generation of urban buses adapted to the specificities of the European cities.

“We are paying great attention to the European and American markets,” says Greenautoo’s vice president Mr Richard Tong, who is also director for the company’s international business. “In the future, we will comply with all European and US standards and directives, and we will make buses of equally high quality but at a competitive price as it is made in China. If an iPhone can be made in China, so can a high-quality bus.”

“The definition of a developed country is not about car ownership anymore, but about the development of its public transportation”
- Mr Zhao Zhifeng, art consultant, Greenautoo

Safer high-strength steel
Bus safety is also a great concern due to many tragic accidents in China, some involving school buses: “If one of our buses were to crash, its carbon-fibre composite materials and high-strength steel structure LKD bus body, can absorb energy when the material fractures and deforms,” says Mr Chen.

Greenautoo’s technical director, Mr Lai Laibin, who also has many years of experience in the Chinese bus industry, says that the company will produce buses in accordance with Chinese national standards and the EU standards: “We integrate high-strength steel with composite materials such as carbon fibre,” he says. “China is throwing a lot of resources at promoting new-energy buses. Many companies simply replace the engines with batteries, turning the buses into electric or hybrid vehicles. However, we are making the buses in a totally different way – redesigning the frames, structures and the powertrain to produce new-energy buses in the true sense.”

Traditionally, welding is an essential part of the process of manufacturing buses. But Greenautoo uses screws and rivets which has the advantage of shortening the lead time substantially. While bus bodies in the past typically took around 15 to 20 days to complete, a Smart Minibus body can be manufactured in three to five days.

Both Mr Chen and Mr Lai know SSAB high-strength steel from working at a bus company in the southern Chinese city of Shenzhen. “The quality made a deep impression on me,” says Mr Chen. “I checked a few domestic steel plants after I started Greenautoo, but none could meet our requirements, so we made the decision to cooperate with SSAB.”

SSAB is a global leader in value-added, high-strength steel. With production plants in Sweden, Finland and the USA, and the capacity to process and finish steel products in China and elsewhere, SSAB employs approximately 17,300 people in 50 countries.
Developing safety components for the automotive industry has become more challenging than ever. New markets and new demands mean that innovation and cost efficiency have taken a more important role.
SSAB has provided support for both commercial and technical aspects of Greenautoo’s development. Examples include parts trials and prototyping for the Docol 1000 DP and Domex 700. In frequently held technical meetings with Greenautoo, the team of experts from SSAB in Sweden has contributed with suggestions on the forming and welding of high-strength steel.
“By working together we can find solutions for a stronger, lighter and more sustainable world,” says Jacky Li, area sales manager at SSAB China.

The future is already here
Greenautoo is based in the city of Changzhou – northwest of Shanghai – which has an urban population of more than 3 million people. “We chose Changzhou because the city has a good public transportation system,” says Professor Wang.

Bus Rapid Transit (BRT), sometimes called a “surface subway,” was first developed in Brazil in the 1970s and has become popular in China, where more than 20 cities have constructed BRT systems.

BRT combines the single-corridor quality of rail transit with the flexibility of buses. It is also considerably cheaper than rail, at one-tenth the construction and operational costs, and takes less time to set up – typically less than three years from design to completion. The BRT system in Changzhou was the third to be built in China, after Beijing and Hangzhou. Worldwide, some 130 cities have invested in BRT systems: “For second- or third-tier cities in China, such as Changzhou, I think we can prevent urban traffic congestion before it happens,” says Cai Jianchen, general manager at Changzhou Transit Group, which has become Greenautoo’s first customer. China’s urban population will hit the one billion mark by 2030, as forecasted by the McKinsey Global Institute, in a much-quoted report from 2009.

By 2025, China will have 221 cities with 1-million-plus inhabitants – compared with 35 cities of that size in Europe today – and 23 cities with more than 5 million, according to the report.

With that huge influx of people to the cities, it will be necessary for all local governments to substantially improve their public transportation systems.

Greenautoo’s art consultant Mr Zhao Zhifeng, who also works with bus design in France, compares the status of the bus in developing and developed countries: “In Europe, people use public transportation because it is convenient, not because they are poor. The Tramway buses on the T3 line in Paris are as comfortable as cars and there is no need to drive, so more and more people take the Tramway bus,” he says.
“The definition of a developed country is not about car ownership anymore, but about the development of its public transportation,” he adds.