With flexibility and lean manufacturing in place, Renault is focusing on quality. In fact, it is obsessive about quality these days.

Renault’s new Laguna is aimed at one of Europe’s most competitive segments (upper-meduim or M2), fighting for customers with the new Ford Mondeo, Peugeot 407, Opel Vectra, VW Passat and, Renault boasts, Audi A4 and Volvo S40/S60.

The new Laguna segment (M2) is demanding and traditionally dominated by specialist German manufacturers with, in recent years, growth seen by Japanese manufacturers. With the development of new vehicle segments (people carriers, compact people carriers, SUVs) this segment has seen a drop in demand in Europe in the private car market, from 22 per cent to 15 per cent since the 1990s.

In 2006, the M2 segment registered a decrease of 3.5 per cent in Western Europe. This has affected the vehicles in the segment in different ways: while the two leading manufacturers are seeing a sustained rise, the third manufacturer has recorded a slight drop. To distinguish itself from such peers, the French carmaker has highlighted quality as its next manufacturing target, implementing several new strategies to build on its triedand- tested manufacturing systems. It aims to attract a ‘demanding’ clientele, thus taking the first step to repositioning Renault in the top sector of the market.

During a recent visit to Sandouville, I drove the Laguna and talked to Michel Gornet, Senior Vice President of Manufacturing and Logistics at Renault, to discover why the carmaker is becoming obsessed with quality. While the new Laguna is well-equipped and feature-laden, its design and driving characteristics are fairly conservative, a sign of Renault pulling away from the radical, some might say, exclusive in the wrong sense, styling typified by the Vel Satis and Megane.

Having claimed that its manufacturing system is delivering rapid order-to-delivery and lean and efficient assembly – and the right model for the segment – Renault is turning its attention to raising the quality bar to premium vehicle levels through some new initiatives in the plant. 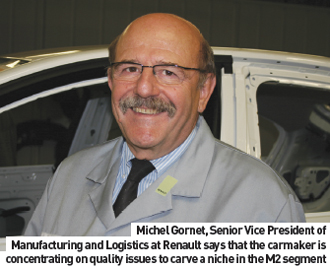 According to Gornet, “We do not have a new production system as such at Sandouville; it is a refinement of the Renault Production System.” He outlined the refinements:

The first of these new systems – the optimisation of the workplace is intended to create a space around the assembly operator solely for final assembly operations –leaving no sub-assembly work and no picking for the line worker to carry out. This is a development of the ‘strike zone’ concept pioneered at Nissan.

IT drives quality and better ergonomics

All functions in which there is a risk of error in the choice of a part by the operator are covered by a computer-driven system (1000 are constantly checked and validated). These devices, which offer a systematic check of parts (poka yoke), simultaneously validate the parts, in quality and quantity. 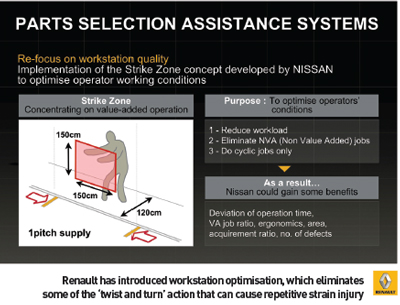 An IT-driven system, known as a parts selection assistance, loads parts into the zone where they can be picked by the principal worker or collated by a separate operator in a ‘kitting zone’, into ‘ready-to-fit’ assemblies. This kind of planning can also have benefits in ergonomics for the operator, removing some of the ‘twist and turn’ actions that often lead to repetitive strain injury.

These systems also help to get rid of the manufacturing chief ’s bete noire, Gornet explains: “We aim to eliminate forklifts with the use of kitting and small trucks with several trailers.”

Gornet explained how these initiatives had been integrated into the existing supply in-line sequencing system (SILS), given the volume of parts (and novel parts for a new model line).

“Prior to implementing the Production Preparation Process (3P), we had too many pieces coming in to the operator for final assembly, leading to errors because of pressure of work and the sheer complexity of some of the operations. For SILS, upstream of the new processes, it is unchanged.”

Sandouville – the key to quality

The Sandouville plant will play a key role in the success of the new Laguna. Its drive to improve quality started from the moment the Système de Production Renault (SPR) – a variation of the Renault production system which has been progressively deployed since 2003 – was put in place. Several actions have been underlined to drive quality into the heart of Renault’s industrial system: particular attention has been paid to the management of suppliers, optimisation of operator training, reinforcement of a quality system and the implementation of systematic static and dynamic tests after the car comes off the assembly line.

Prior to the arrival of the new Laguna, benchmark activities were done at the Nissan factories in Tochigi, Japan and Sunderland, UK as well as at the Renault factories at Flins, France and Valladolid, Spain, to capitalise on the experiences gained from the launch of the Clio III and Modus models. The quality supervision plan was reinforced by the systematic analysis of all functions where there was a risk of error.

For each of these, a checking process was put in place, which operates from the suppliers to the time the car leaves the plant. The most complex functions (electronics, noise, geometry, water, airtightness and engine compartment) are submitted to continual measurement and analysis.

The benchmarking operation, carried out against Alliance partner Nissan, has led to a number of improvements in performance. One example is a rigorous quality standard system known as the Alliance Vehicle Evaluation Standard (AVES), comprising more than 500 evaluation criteria and done on a sample of vehicles when they come off the assembly line.

More than 160 Sandouville employees were moved to the Centre de Réalisation des Prototypes Véhicules (CRPV), and have worked on the improvement of the production process.

All labour groups in the plant (sheet metal, paint, assembly and quality) have been involved in the production of Laguna prototypes. To meet the variations of the production cycle and major fluctuations of demand, a two-way relationship between factories has been created.

The 480 staff who were relocated from Sandouville to other Renault sites during the downturn of production in 2006 and 2007, have now been reintegrated into the plant in preparation for the ramp-up of production. 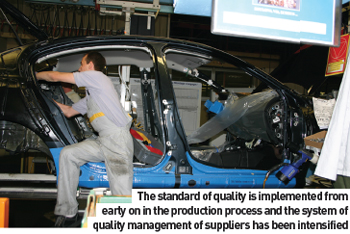 The quality of the end product that emerges from the factory is dependent on the standard of quality from early on in the process. With the new Laguna, the system of quality management of suppliers has been intensified. Renault has actually investigated as far as four stages along the chain of supply in order to identify risks and find a solution for them. The Service Qualité Fournisseur (SQF), the supplier quality service, is involved from very early on in the project to ensure that all suppliers are capable of meeting a level of uniformity of parts.

At all stages during assembly, there are measures in place to ensure the highest quality. These include strengthened protection (several rigid shells on the exterior, plastic films for components during the production process) and static and running tests as well as electronic checks are carried out on every vehicle leaving the plant.

The test track at the end of the assembly line has been improved, with the aim of showing up more clearly any NVH issues (using pavé, several series of tight bends and so on).

Whether improved quality will significantly help Renault win out in the M2 segment remains to be seen: the car is capable and well-equipped. Perhaps the assurance of a better-built, more straightforward car will appeal to a broader market than its quirky designs of the past and it may make further inroads into the demanding fleet market.

Either way, the tools are in place and the will is most definitely there.