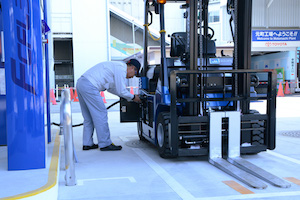 Japan - A hydrogen station has been built at the OEM's Motomachi plant in Toyota City, Aichi Prefecture. It will be used to fill 20 new zero emission fuel cell forklifts, which have been deployed as part of a joint initiative with the Ministry of the Environment and the Ministry of Economy, Trade and Industry.

The new forklifts join two that have been operating at the plant since January 2017. The goal is to have a total of 180 fuel cell forklifts in use at the facility by 2020, which according to the company, will mark an important step in its bid to eliminate all emissions from its plants by 2050.

As well as using zero emissions vehicles, the company has vowed to simplify and streamline its manufacturing processes with the primary goal of making its plants environmentally-friendly. It has also suggested that the use of solar and wind power will play a key role.

The Mirai fuel cell electric vehicle (FCEV) is also made at the Motomachi plant, alongside the Crown, Mark X, and Lexus GS. The second generation of the company's flagship FCEV is set to be unveiled at the 2020 Tokyo Olympics as it looks to ramp up the automotive industry's reliance on hydrogen.