The Chinese market starts to mature

In preparation for the second AMS China conference, to be held June 28 – 30 at the Intercontinental Shanghai Pudong hotel, AMS recently visited several carmakers and suppliers in China. Some interesting themes emerged from the meetings and plant visits, both in manufacturing and in component and systems supply. Monday, March 21: Travelled to Shanghai for a meeting with John Buttermore, Vice-President, International Operations (Manufacturing), ASEAN and Africa Operations at General Motors.

I mentioned to Buttermore that I was getting a bit tired of being driven everywhere in China in VW Santana taxis, an old design and not always in their first flush of youth. Of course, there was some occasional relief to be had riding in the occasional VW Touran; the Touran was ‘taxi-ised’ by VW China mainly for the Beijing Olympics in 2008 and examples, with their distinctive glass-fibre ‘cap’ - complete with taxi lights - have also spread to Shanghai. I said to him that the Touran must be very expensive in China and didn’t GM or its partners in China have a competitor for the taxi market? Buttermore: “If you look at some of the products coming out of S-GMW, some of the cars, the Baojun series, are probably close to the Santana size, and the Sail could be a good competitor.”

Yet China has an extraordinary penchant for sticking with traditional ways while embracing innovation; the Santana will likely remain as the taxi of choice for a long time yet and it may be very hard for other brands to make inroads. A taxi driver will no doubt seek to buy himself a premium brand for private use, but not think of changing his work vehicle to something more upmarket.

Rationalising the manufacturing base 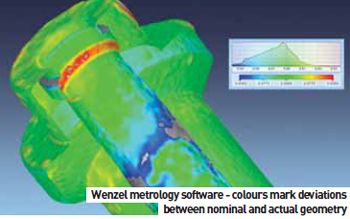 The Chinese government has been quoted as wanting to reduce the number of automotive manufacturers. There are approximately 117 currently in existence, although that is very difficult to confirm as there are many sub-assemblers and ‘modifiers’ that may be counted as OEMs. The target figure would consist of 10 major and 10 minor vehicle makers. Buttermore was sanguine on this point: “It’s anyone’s guess what the Chinese government wants to do about consolidating. All we can say at GM is that China is a very active and growing area for us and our partners.” Tuesday, March 22: Called in on one of our confirmed speakers for the 2011 AMS China conference, Weigo (William) Cui of Siemens, at his offices in central Shanghai.

Cui, who also spoke at our 2010 event, reiterated the point that most OEMs and Tier suppliers have made, that all parties in China must move forward with ERP, MRP and MES systems that can mesh with their suppliers and customers to be able to handle the rapidly-rising demand from the Chinese domestic market. This particularly applies to the market now, as labour costs have started to rise and China is no longer the bargain workshop of the world. With this, automation will come to the fore, further helping to deliver the quality and sophistication which Chinese vehicle buyers are demanding from new cars.

For complex moulded shapes (such as a headlight assembly), the system enables ‘hidden’ areas to be accurately measured and non-destructively tested. Of course, this system is also very useful for nominal-to-actual comparison and reverse engineering applications. 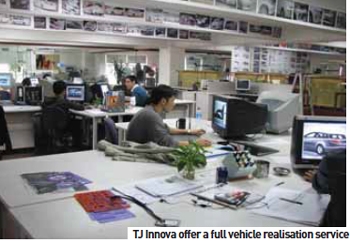 Thursday, March 24: Travelled to Wuxi for a meeting with Gregory Hunter, Chief Designer of TJ Innova, a company that provides more than 17 different, ready-made vehicle platforms for many domestic OEMs. This technology, known as OPMM (One Platform Multi Models) can use various A-surface panels on common platforms that may be shared between OEMs, helping to reduce vehicle development times.

The company provides services for the whole development ‘chain’, from market survey and research through to concept vehicle design, digital mock-up, prototyping, engineering design, tooling and component design services. After visiting a buzzing design studio, Hunter showed us around the tool and die production plant (still in its trial period), where we witnessed some try-out presses testing new panel designs for some ‘unnamed’ customers.

General Motors has announced that its joint-venture with two Chinese automakers would introduce a new passenger-car brand called Baojun, which translates into English as ‘treasured horse’. 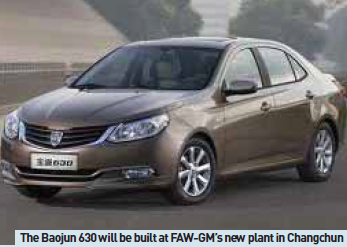 GM owns 34% of SAIC-General Motors-Wuling (or SGMW), which already produces a line of small commercial vehicles. With the Baojun, General Motors hopes to launch a vehicle that will appeal to the rural Chinese domestic market. The partners are banking on high demand, with plans to produce 100,000 examples of the 630 model per year. The birth of the new brand is in sharp contrast to GM’s recent killing off of Hummer, Oldsmobile, Pontiac and Saturn, together with the closure of the Opel factory in Antwerp, Belgium. Baojun will be positioned as a producer of reliable, low-cost cars that are smart and dependable, said Shen Yang, General Manager of SGMW.

According to GM spokesman Tom Wilkinson, the Baojun range will feature ‘basic but sound engineering’, aimed at buyers outside China’s major metropolitan areas. Wilkinson said that while the mechanical systems of the vehicle would be comparable to those of older cars, its safety and emissions equipment would be modern. Also making its national debut will be a new pickup from FAW-GM, GM’s light-duty truck joint.

Friday, March 25: To Shenzhen for a visit at BYD’s plant, which included a conversation with Paul Lin, Senior Manager, Auto Export Trade Division. Lin spoke of BYD’s vertical integration and about how the organic growth of the company, from a battery and electronics maker to a full automotive manufacturer, has resulted in it having so many competences. “We are a very young company in automotive industry terms. We need to develop our expertise and our ranges; from sedan, to MPV to SUV. After that, we will look to having a range of power options for each product: gasoline, hybrid, dual mode (more than 50% electric, with range-extender IC engines) and pure electric.” I asked Lin about the current range and how much bigger it could be in the future. “Now we have around 10 platforms with different power options, some of these are just for EV, such as e6,” he said. The manufacturing lines at BYD are driven by the EV and hybrid configurations; the 3 models have their own line, as do the 6 and 0 ranges. 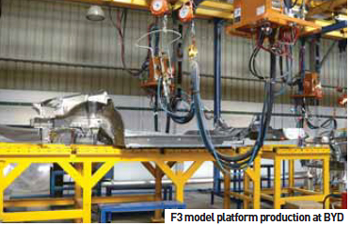 Part of this line configuration is also determined by geographical location; final assembly is carried out at Shenzhen, Xi’an and Changsha. “At each base we produce different series of cars, with full manufacturing, stamping, welding, assembly and of course, powertrain.” Local market and labour availability have driven the geographical location choices, added Lin. “In China, different places have different sets of skills available in the local population. Here in Shenzhen, where the living costs are relatively high, the workers come from high-tech industry backgrounds which makes them ideal for working on our ‘new energy’ range of top-end vehicles. In Xi’an, there is a very large population and the choice of good-value labour is greater. It is a very stable labour market as there is not so much high-tech industry there that would encourage [employee] churn.”

Essentially, it is down to the local demographics that Xi’an produces a lot more traditional, petrol-engined vehicles, using lower levels of automation.

BYD is open-minded as to where it sources its machines - it is interested in receiving proposals from Chinese machine makers, as Lin explained: “On the stamping side we are using mainly Chinese press makers, such as Jier. Globally, we are using ABB or Kawasaki robots. we produce our own conveyors, jigs and fixtures.”

The carmaker is so vertically-integrated that it produces its own paint lines at some locations. At Xi’an the line was built by Dürr, but the paintshop at the Shenzhen plant was built by BYD, from design through to infrastructure, paint pumps and controllers. The company has such well-developed line building expertise that it carries out integration work for other companies.

In powertrain, BYD are buying-in some parts from BorgWarner, including gears. Delphi and Bosch supply fuel injection parts, although BYD makes its own major components such as crankshafts, cylinder blocks and heads.

It was a very quick lunch as Schwind has an incredibly busy schedule; as we talked, one of his staff interrupted to discuss a supplier shortage issue and he calmly ordered more overtime for a full shift to help balance the line. Schwind went on to comment on the supplier situation in China: “The suppliers are often very good at the beginning of a contract, they supply the right quality on time for quite a long time. Then delivery and quality can start to slip as demand rises. Also, every supplier must have a good MRP system in place; this is becoming critical.”

His job has grown exponentially in size and urgency, as Daimler is investing $20 billion – yes, billion – in China over the next four years, with the goal of selling 500,000 vehicles per year by 2015. For the first time in 125 years, Mercedes- Benz engines will be made outside Germany, in a new engine plant modelled on the operation at Kecskemét, Hungary (production site of the new A- and B-Class models). I asked him about material and finished part quality systems, and how he could ensure every part measures up to Mercedes- Benz quality?

“We ship all raw materials and supplied components to Germany for testing, and all engines produced here will be shipped there for testing for some time, I am sure. But we will build a large R&D centre here, and a massive laboratory for testing.”

The BBDC site in Beijing’s Economic-Technical Development Area is large, but bordered by other new facilities. How will he expand operations? “In 2010, we considered moving to a larger site but decided that we have enough room here. We have planned a three-plant site. This three-strand approach is a global first for Daimler, with powertrain, stamping and assembly all on one massive site.”

On the same day, we had breakfast with Andreas Hoffbauer, spokesman for VW Group China. Over the meal, he reflected on the changing demands of the typical car buyer in China. “Aftersales will be a crucial area for development. While most buyers so far in this country have been first-time purchasers, many are now looking to buy their second car and they’re studying reliability and service. I think we will see brand loyalty as a growing factor in car buying decisions. All carmakers will need to develop a good dealer network to look after customers in the future. This means massive investment, given the vast size of the possible car park.”

Wednesday, March 30: After a visit to the largest vehicle plant in China, the FAW-VW facility in Changchun, where we interviewed the paintshop manager for a feature in AMS’s sister magazine, Automotive Paintshop Solutions, after touring the paint facilities.

Directly on to Chongqing to visit Changan Automobile. There we talked to Wan Nianyong, Manufacturing Department Section Chief about the company’s joint venture activities with Ford, Mazda and Suzuki. I asked him and his team (the meeting quickly grew to include 11 staff and myself) what, out of quality, cost and raising production levels, was his main preoccupation: “We are pushing for quality all the time. This is the way that China needs to go forward in every area. China cannot compete on the global stage using price and volume alone, quality is the key to success.”