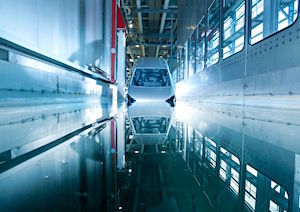 US – According to the Germany-based supplier, the deal to build a new paintshop at Tesla’s growing plant in California runs into “nine figures” and is the most valuable in its history. Eisenmann will provide two fully automated paint lines, one for car bodies and one for components such as bumpers and rear-view mirrors.

“Developing energy-efficient solutions is a goal both our companies share,” noted Matthias von Krauland, CEO at Eisenmann. “Tesla awarded us the contract on the strength of our team’s outstanding commitment and efficient, eco-friendly technical solutions.”

Eisenmann’s E-Shuttle 300 flexible conveyor system will be deployed in the pre-treatment and electro-coating lines for the Model S and Model X, and later for Tesla’s third-generation car. Two Eisenmann solutions will be used to remove paint overspray.

Installed in the car-body paint line will be the E-Scrub v.2, which according its maker requires only very low air differential pressure and little maintenance, being “less susceptible to soiling than other technologies”. The coating line for plastic components will feature the E Cube system with advanced filtration technology, which can operate without chemicals, water or other additives. Both E Cube and E-Scrub v.2 are claimed to be “exceptionally energy efficient”, therefore helping to reduce water consumption.

Eisenmann will also supply skid conveyors and eight dryers. The paintshop will be managed and monitored using the company’s E-MES manufacturing execution system, a modular and scalable solution for high-level control of multiple subsystems.

Tesla is planning a two-stage expansion at Fremont, a complex which currently covers 5.3m sq.ft, in order to boost capacity from 30,000 to 500,000 units per year. Originally operated by the New United Motor Manufacturing joint venture between General Motors and Toyota, the facility was purchased by Tesla in 2010 and extensively remodelled to make the Model S from June 2012. Production was suspended in July 2014 to add capacity in the bodyshop, improve powertrain assembly and upgrade the vehicle assembly line.