Speeding up production design with Delmia

China Motor Corporation (CMC), based in Taiwan, turned to a team from the National Tsing Hua University to assist it in completing its digital factory project. The result was a tailor-made program developed using Delmia V5 known as MGS.

Prototyping at the China Motor Corporation had a reputation of being a costly and timeconsuming process and because the company was keen to get its digital factory project running smoothly, it turned to a team from the National Tsing Hua University to assist in devising a better solution. 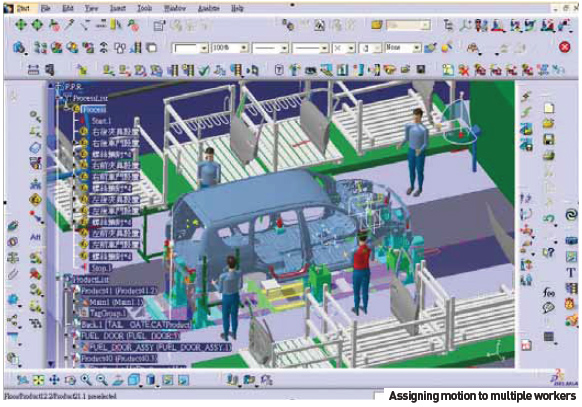 Liu Szu-Tsun, manager of the digital factory project team and Motion Generation from Semantics (MGS) project originator at CMC explains: “Prototyping acts as a communication tool between designers, engineers, operators and any other users. It can assist developers to generate, review and amend design concepts, especially when these are complicated and difficult to visualise on paper. But at CMC, this process was often costly and time-consuming, especially in production design.

“We estimated at the outset that it would take three months to model the tasks of each individual worker, a totally unfeasible investment. The thrust of this project had to be aimed at maximising efficiency and speed in simulating the human motion within the digital factory,” Szu-Tsun says. What drove the project forward was the potential commercial pain, caused by lengthy modelling processes. “These were quickly identified as being accurate timings for the various work cells, the optimal layouts for those cells, a study of the ergonomic impact of each task and a clear overview of how the tasks combined to make an efficient whole for the complete manufacturing process,” Szu- Tsun continues.

During this phase, it was realised that there should not only be simulation of the people, but also the tools and other equipment involved, so that this interaction could be assessed and any possible interference eliminated in the design phase.  The MGS Project manikins operated hand tools such as welding guns and power screwdrivers and the project team found that once many of these movements had been modelled, they could be reused again and again, thus minimising the animation required.

Features of MGS
In ensuring that the four objectives were tackled by MGS, a customised program under the Delmia V5 platform was developed. The MGS project team decided to see if it could generate manikin motion through ordinary language typically used to describe motion and tasks. Using these intuitive semantics, or natural language, as the input, the team demonstrated that the MGS system enabled human assembly motion to be generated rapidly and automatically to perform the requisite evaluations. 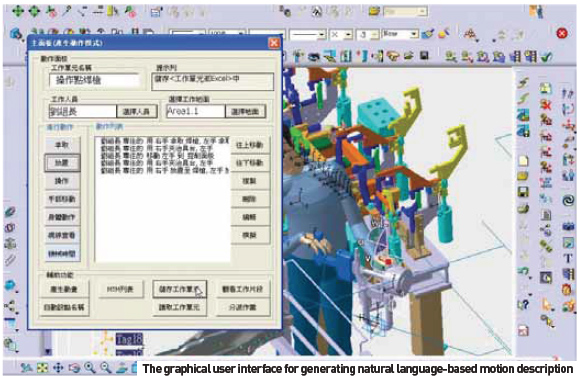 The efficacy of the new technique was tested on a door assembly workstation with four workers. The resultant MGS system was found to be of special value when there were pivotal manual tasks that played a vital part in the whole production, where there were several potential work station layouts, giving differing levels of efficiency and where output fluctuation occurs. The MGS team began by using Delmia to model the manual workstation in digital space. A graphic user interface was developed to work with Delmia V5 to simplify the motion-sentence construction process. This was achieved by interactively manipulating the CAD models.

The new interface was then able to allow the picking of both the manikin and the product model in Delmia V5 before this was verbalised and integrated into the natural, languagebased motion sentence. Using the language techniques developed in the MGS, the CMC team, none of whom had much experience working with Delmia, was then able to create the work cell layout, the task simulation and their action orders speedily and efficiently. Once the motion of the first manikin had been captured, this was (where appropriate) shared with other manikins, creating a multiperson environment ready for evaluation. “When we encountered poor designs or layouts,” says Chang Shao- Wen, who is studying a doctorate at the National Tsing Hua University, “we could easily move the objects to their ideal positions before importing the required animation. Even at this early stage, we could carry out assessments of walking paths, facilities layout, working postures and biomechanics.”

System is efficient and intuitive
After conducting the posture, estimated working time, task simulation and action orders in writing, the content of the action orders was ready to be imported into Microsoft Excel. The completed data (in written form) could be obtained by simply adjusting it to the required format. 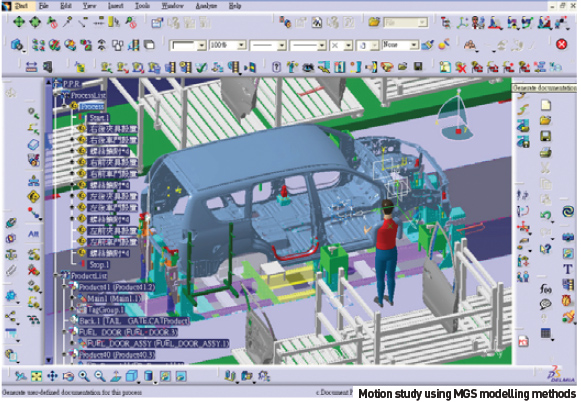 The advantages of the system is that it is efficient and intuitive for users to conduct task simulation and action orders by the natural language description input; and work arrangements are automatically created after the motion generation, saving both labour and time. Chen Peichao, manager of the digital factory project team, concludes: “We have noted several advantages of our methodology. The primary one was that the MGS prototype system was both efficient and intuitive for the user to conduct task simulation and action orders by simply using natural language description inputs.”