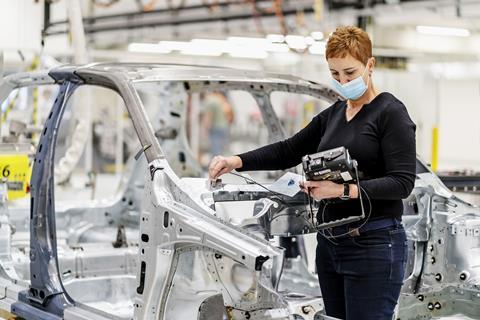 David Vaněk, head of Model and Prototype Manufacture, described the resources and capabilities of the new manufacturing technical development department: “Our new facility has three floors and houses the parts warehouse, bodyshop, final assembly and paint shop, all within the smallest of footprints ensuring short distances. At the same time, the facility’s high degree of automation allows for more agile processes and a significant increase in production capacity for test vehicles and prototypes. Furthermore, the building features state-of-the-art virtual reality technologies as well as 168 workplaces in open-space offices and 13 meeting rooms. A large part of the complex - 14,000sq. m - is used for vehicle manufacture.”

The ground floor accommodates the parts warehouse including a covered yard for unloading trucks. The car bodies are built on the second floor, while the third floor contains the final assembly and the paintshop. A freight elevator is used to transport the material between floors. With two robot stations, the proportion of automation in the body shop has increased from 15 to 45%. This doubles production capacity to ten car bodies per week – while requiring 20% less space. To develop weight-saving designs Skoda has expanded its bodyshop to include an innovation centre for testing joining techniques, such as clinching, riveting, flow drill screw (FDS) fastening, laser welding and composite construction.

Virtual reality technologies allow workstations to be preconfigured and customised, and state-of-the-art IT systems are used in logistics. Quality control will be integrated into the production process and run parallel to the respective manufacturing steps. The new facility also includes an up to 300 km/h rolling road for this purpose.

Skoda notes that in order to monitor individual components and the vehicle as a whole, classic tests remain essential, despite digital simulations and models gaining more importance in the testing phase. Due to the increasingly complex and powerful electronic architecture of modern vehicles, the focus is on functional tests of electrics, electronics and assistance systems, as well as on communication between in-car computers.