The wider scope of Skoda 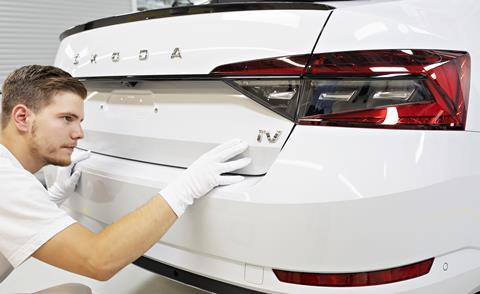 Amid all the constant fluctuations in the global automotive industry, Skoda’s positive recent history has included rising sales and a strong financial performance. There are, however, signs this situation may be changing, with September 2019’s figures revealing a reversal of recent sales growth.

While overall industry sales across Europe fell in the first eight months of 2019, by 3.2% across the market and by 4.3% at the VW group, at Skoda they rose, albeit modestly by 1.6%. The brand’s biggest selling model, the Octavia, sold over 156,000 vehicles through to August, making it the sixth biggest selling model in Europe. It was also the best-selling model in Austria, the Czech Republic, Finland, Poland and Switzerland, as well being a top-ten seller in another 12 markets. However, when the September figures were released, total year-to-date sales, at just under 914,000 units were 2.7% below the same period in 2018 (c.939,000 units).

A decline of around 22% in China was the primary cause of this reversal. A small decline also took place in Skoda’s home market while sales across the rest of Europe continued to rise. 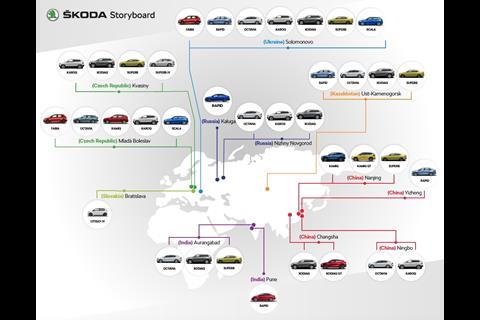 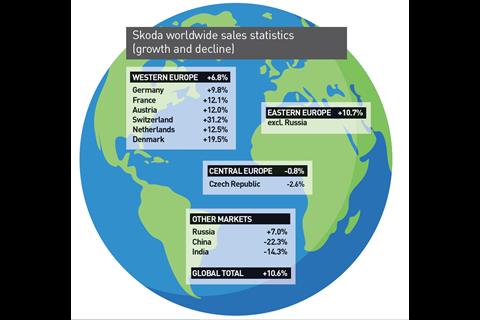 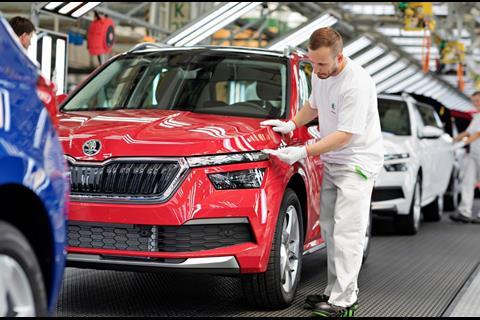 Skoda achieved a production milestone in 2019, assembling more than 900,000 vehicles at its Czech plants for the first time in its long history

Skoda’s strong financial results have also been reflected in a steady rise in its employment levels. In 2017, the brand employed just under 36,000 people; this rose to nearly 38,000 in 2018. The brand’s employment is now expected to rise to 43,000 as certain activities within the VW group are transferred to Skoda’s responsibility, while existing Skoda operations continue to grow.

Around 1,400 employees were based outside the Czech Republic in 2017 and 2018. However, with growth outside Skoda’s home base and the re-allocation of other group activities to Skoda, the bulk of the expected future growth of c.5,000 in Skoda employees will take place outside the brand’s home market, particularly in China and India. 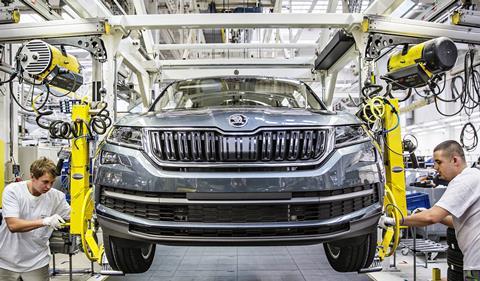 Ahead of the recent transfer of responsibility and activities into Skoda, the brand had been playing an important role within the VW group. For example, it has been making vehicles for the Seat brand (notably the Ateca SUV now and, in the past, the Toledo compact sedan). Skoda also makes batteries and electric motors for other Volkswagen group operations. It has recently been given lead responsibility for the MQB AO platform, as well as taking overall responsibility for the group’s activities in India and the next Passat/Superb range.

The replacements for the Volkswagen Passat and Skoda Superb will be built in a new multi-brand plant in Turkey, or possibly elsewhere in eastern Europe, potential details of which follow below. In terms of corporate organisation, the brand is part of the ‘volume’ brand group alongside Volkswagen cars and LCVs, and Seat.

The growth in Skoda’s vehicle volumes and employment has been accompanied by and underpinned by a strong investment programme in its factories and new model programmes. For example, Skoda committed more the €500m in its Czech operations in 2018, with highlights including expansion of its paint capacity and the installation of a range of robots across its assembly lines. Further details of this recent investment are also set out later in this article. 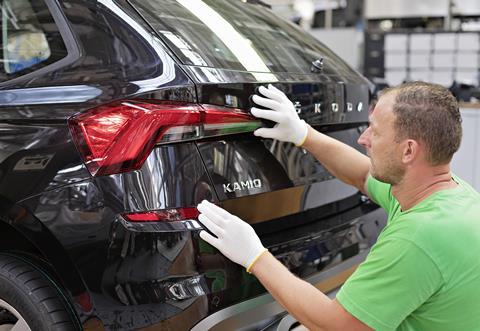 Much of Skoda’s recent growth has been driven by the introduction of SUVs, reducing the brand’s dependence on the Octavia and Fabia cars, for so long the mainstays of its sales. The Kodiaq and Karoq have recently been joined by Skoda’s smallest SUV, the Kamiq, providing Skoda with SUVs across the B, C and D segments. In Europe alone, these three SUVs are currently being produced at a combined rate of c.250,000 units a year, with Chinese volumes expected to exceed this level in the near future. In addition to the emergence of SUVs as a major driver of Skoda’s growth in Europe, the Chinese market has a number of unique models, both in SUVs and conventional cars. For example, Skoda’s Chinese operations (and indeed the Volkswagen operations in Russia) have retained production of the compact Rapid sedan; this has been replaced in Europe by the Scala hatchback.

In addition, Skoda China has recently started production of a unique Chinese version of the Kamiq, known as Kamiq GT, in the VW group factory in Nanjing. The Chinese Kamiq GT is made on an old, low-cost version of the PQ24 platform, rather than the current MQB platform which underpins the European Kamiq. This China-only strategy for the Kamiq GT mirrors the situation with the Kodiaq; for this model, Skoda makes a China-only sporty version, Kodiaq GT. Further China-only models are expected to be introduced in the next couple of years as part of the Skoda brand’s planned global growth to 2m vehicles a year. 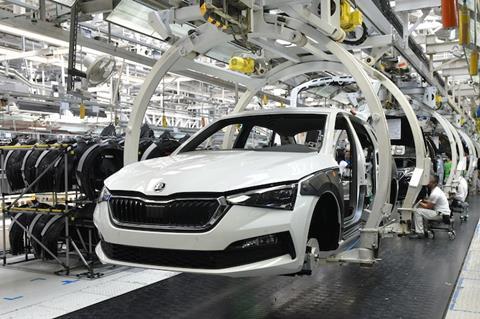 Škoda achieved a production milestone in 2019, assembling more than 900,000 vehicles at its Czech plants for the first time in its long history

In addition to an expansion in facilities for the Superb hybrid (see New model programme), the €500m investment in 2018 included the following:

• Production of electrical components, especially batteries: The new battery line can make 150,000 batteries for hybrid vehicles, following a €25m investment; 13 Kuka robots have been installed to handle batteries and their constituent parts. These batteries will be used in electrified (hybrid) models made on the MQB platform whereas batteries for the new MEB (electric) group platform will be made by third party suppliers, alone or in conjunction with Volkswagen.

• Expansion of painting capacity: Until recently, around 60,000 Fabia bodies had been sent annually to the VW plant at Osnabrück in Germany for painting. This practice came to an end in Q3/2019. The new paintshop has capacity for 168,000 bodies a year, well above the number of Fabias that had been sent to Germany for painting. The new paintshop features an operational innovation, with the bodies moving sideways through the facility, rather than front first; this allows hot air to flow though the engine bay along the length of the body improving the efficiency and efficacy of the drying process.

• Completing a €100m investment in the Kamiq line, to make it capable of making 400 vehicles a day.

In addition, Skoda has committed to making all the brand’s Czech plants CO2-neutral by the middle of the next decade and to increasing the use of recycled materials in the production process; for example, 85% of the new Scala is claimed to be made of recyclable or reusable materials. 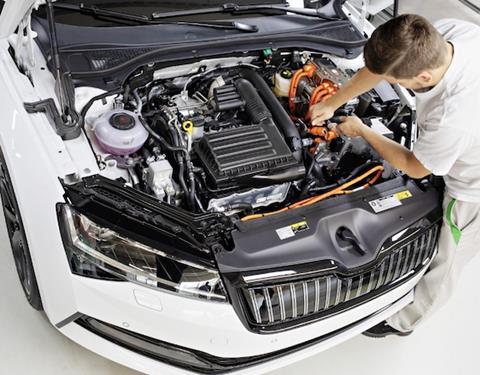 Strong growth, too, at Kvasiny

The scale of expansion at the Kvasiny factory is quite remarkable; in 2014 it made just 166,000 vehicles, but in 2018 production exceeded 300,000. The plant now has two bodyshops (one making 740 bodies a day, the other 680 a day) and two assembly halls. In one hall, the Kodiaq and Karoq SUVs are made, along with the Seat Ateca; the second hall makes the Superb. In addition, to improve production efficiency at Kvasiny, a new parts storage warehouse has been built; this covers 1,750 sq.m, and is 10 metres tall, providing space for 45,000 shipping crates, with components moved around the building by automated, driverless vehicles.

Aiming for 2m vehicles a year

By the middle of the next decade, Skoda wants to be selling 2m vehicles a year; with Czech capacity at around 800,000, and more than 300,000 units to be made in other European factories within the VW group, much of the future volume growth will come from expansion in China, India and Russia. The brand already has a market share of 1.6% in China, and aims to double this, with a major expansion in the brand’s Chinese dealer network under way. It is not just the manufacturing network that requires investment to underpin Skoda’s expansion. And it will be in the sales arena that the success or failure of Skoda’s plans will be seen.