In a world preoccupied with the principles of lean manufacturing, a new generation of the workforce has emerged that needs to be given the tools – through skills training – to meet an increasingly important role

Almost a quarter of a million people are employed by the UK’s automotive sector in more than 3,000 businesses that contribute an estimated £8.5 billion (about $17 billion) to the economy. Ranked fourth in Europe behind Germany, France and Spain, and ninth globally, it has to rely on lean production if it is to retain and grow its global market share, and this means educating the workforce in the way of all things lean.

Since it began operating in January 2007, the National Skills Academy for Manufacturing (based in Birmingham, UK) has been helping to develop the right training products and establish a trusted system of good practice for employers. Companies such as Land Rover, Aston Martin and Honda have started supporting this approach. The Academy is also encouraging the adoption of existing quality training products progression to national manufacturing skills. Furthermore, it highlights to employers that good training relies on more than good content and delivery. It requires a proactive approach to preparing staff to learn and then a quality follow-up process to achieve sustained business benefits long after the training has been delivered.

Raising the bar
One firm that has successfully worked with the Skills Academy is Group Lotus. The company employs close to 1,000 people globally and is working with the Academy to further improve the skills of the workforce employed at its plant in Hethel, UK by the end of 2008. 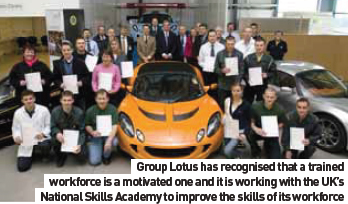 Lotus believes that to retain its world-class reputation, it must help its employees to realise their potential and it has worked with the Academy to create a dedicated training programme for its employees. The programme offers them the opportunity to undertake the National Vocational Qualification (NVQ) Levels 2 and 3 in Business Improvement Techniques – a national qualification that helps participating individuals deliver improvements in quality, cost and performance back to their companies.

The Skills Academy has not just helped identify the most appropriate training; it has also worked with Lotus to build an internal team of trainers, all of whom are validated to national standards for training delivery. This team can teach the NVQ to other members of staff and because of the Academy’s validation, Lotus can be certain that the quality of the team’s training reaches the national benchmark.

Up-skilling the staff
The initiative at Lotus stems from the work of John Vigar, Continuous Improvement and Manufacturing Business Coordination Manager, and John Bradley, Regional Manager for the East of England at the Academy. “Lotus cars are hand-built,” says Vigar.

“Without having automated robotics in our production system, the build quality of our products is therefore highly dependent on the skills and abilities of our workforce. A company using robots would probably not think twice about upgrading software programmes to improve performance,” he tells AMS. He adds that for Lotus to stay at the forefront of world-class manufacturing, it makes perfect sense that the company must continuously invest in the ‘up-skilling’ of its staff. “The NVQ B-IT programme is an excellent way of contributing towards that,” Vigar tells AMS.

Lotus has received more than 280 enrolment requests from staff since launching the initiative in early 2007, so it is well on the way to accomplishing its goal of 300 staff achieving certificates by 2009. The first fruits of the programme was the graduation of 17 Lotus employees from the Academy in December last year.

Later this year Lotus intends to cascade its NVQ training initiative to its supply chain – first targeting suppliers and contractors that are based in eastern England. The positive effect of quality training will then be felt through all parts of the automotive sector, helping to strengthen the industry, and manufacturing as a whole, throughout the UK. The Lotus approach is a demonstration to the rest of the automotive manufacturing sector of how and why to invest in people. The National Skills Academy for Manufacturing’s position is clear. Growing the skills base in the UK can benefit individual businesses, the automotive market and the economy as a whole.