When Jaguar closed down its Browns Lane facility in the UK recently, it had the daunting task of moving final assembly of its XK model to the nearby Castle Bromwich plant. It called on conveyor supplier Dürr to help solve the problem.

The closure of Jaguar’s Browns Lane facility in Coventry was more than a sad day in the marque’s history. It also represented the beginning of a massive logistical challenge in moving the carmaker’s flagship XK sports car final assembly to the nearby Castle Bromwich plant. Just to add a bit more engineering fun to the challenge, the carmaker also did a complete redesign of the XK, requiring a thorough modernisation of the final assembly line.

Key to the success of this huge undertaking was German conveyor supplier Dürr, which was tasked with providing a conveyor system that supported the design and process requirements to complete the trim and final assembly processes for the new XK.

“Originally, the paint and body assembly for the outgoing vehicle was painted and constructed at the Castle Bromwich assembly plant and then shipped to Browns Lane for final assembly,” says Gurvinder Bisla, Trim and Final Process and Facilities Manager –Advanced Manufacturing Engineering, Jaguar and Land Rover. “The new strategy was that all processes would be completed at Castle Bromwich. Now we’ve got the body-in-white facility and the trim and assembly facilities next to each other in the same building.”

Process of assembly has been improved

A new XK’s journey along Dürr equipment in the revamped Castle Bromwich facility begins on a powered roller conveyor, which picks up painted body from the paint shop and delivers it to a belt-driven drop section. This in turn takes the body from high level (truss level in the building) down to a couple of metres off the floor – much like an elevator.

“The body is then transferred from the drop section to a heavy electrified monorail system (EMS) body carrier. The body is taken to the skillet conveyor system which in turn wends its way through Trim Line 1, covering about 10 work stations,” says Bisla. He explains that in Line 1 the doors are taken off the body. “The skillet has height adjustable lifts so the body height can be varied. As the XK is a two-door car, one of the initial operations is to take the doors off the car and load them onto two fixtures, which are part of the skillet. Then we insert the harness, stamp the body with its VIN and put the instrument panel in,” he tells AMS.

The body then transfers from Line 1 to Line 2 via two turntables – a receiving turntable at the end of Line 1 and on to another receiving turntable and combined lift. The rotator skillet turns it 90 degrees and feeds it to the start of Line 2. “The skillet system is like a loop – there are four turn tables/lifts in each corner,” says Bisla.

Some of the key processes for Line 2 include completing the trimming on the doors, fitting the bumper, glazing the car; and by the end of the Line 2 the doors are fully trimmed and put onto a drop section which transfers them, via a separate monorail system, to the middle of Line 4.

Meanwhile the rest of the body is shifted to another drop section that transfers it from the skillet to a body carrier on a power-and-free chain conveyor and is moved on to Line 3. “This is where we do all the major under body operations including fuel tank, powertrain, chassis components, exhaust system and wheels and tyres. The body is then transferred from Line 3 via the power-and-free conveyor to a lift-and shift system that lifts the body off the carrier and drops it on a floor-level flat conveyor. From there we fit the hood, install door glass, fit the seats, do electrical test and configuration, fill the car with fuel and drive it onto the off-track area.”

From an engineering maintenance perspective, the Dürr system was designed to achieve 98 per cent uptime. “If you’ve got 100 minutes of production time, we set ourselves a target that the total facility system is available for no less than 98 per cent of that time – no breakdowns or failure mode. It’s meeting those criteria very well,” says Bisla.

The major benefits of the system experienced to date include: flexibility – especially in terms of process reallocation that might drive height or setup changes; extreme maintainability; and it’s very easy to install.

“Some of the systems that we specified and procured through Dürr involved a lot of wireless communications and non-contact power induction,” says Bisla. “It’s a very flexible system and was quick to install. In terms of flexibility, from a server panel we can adjust the skillet height position, the drop position, and the whole system setup. You can control it from a PC rather than having to physically change proxy positions, and flag triggers and that sort of thing. From an installation point of view we didn’t have to spend a lot of time pulling through lots of cable because of the wireless communications and non-contact power induction.”

Perhaps the greatest success was the installation and integration of the system – especially considering the tight timeframes demanded by Jaguar.

“We started installing the system in May 2005 and completed it by the end of August the same year. We converted the old, outgoing XK body-in-white facility, stripped it out in two weeks and then installed the new facility in 16 weeks. From there we went straight into a preproduction build phase and hit Job 1 in December 2005. Full production was started at the beginning of 2006,” Bisla tells AMS.

“Dürr understood the very tight time frames we working in. We awarded the company the contract in January 2005, and by April/May we’d agreed on a layout and design, and Dürr had started manufacture. By the end of the year we’d finished launch ramp-up for the programme and commenced full volume build. The system has performed extremely well to date.”

Habasit opened its Modular Belt Innovation Centre in Reinach, Switzerland in June, and AMS caught up with Chairman of the Board of Directors, Giovanni Volpi, to learn about the company’s expansion plans, its new innovations and how it is helping its customers to reduce costs. 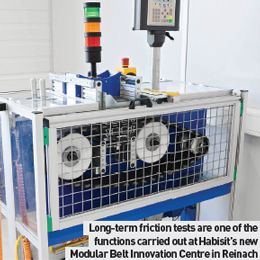 AMS: In which geographical markets does Habasit see its business growing?

Giovanni Volpi: We will grow in the places where the automotive industry grows. Absolute growth is predicted for Eastern European countries and relative growth will take place in Asian countries such as China and India. In traditional car manufacturing countries, there is a strong need for cost reduction. Habasit helps customers to increase productivity; through innovation and new products, Habasit will continue to gain market share in traditional markets with the benefit of investments to be made. Innovative solutions in conveying technology will be a strong cost-saving element.

AMS: How has the rise in material costs affected Habasit’s business and products?

Giovanni Volpi: Rising raw material costs have had an impact on material costs; however, being the clear global market leader, Habasit is able to react and compensate with economies of scale, innovation in processes and improvements in efficiency. We offer competitive conveyor and process belts based on our state-of-the-art production technology and know-how, providing customers with the best solution, performance and return on investment.

AMS: In which production sections do you see Habasit growing?

Giovanni Volpi: Our full range offer enables us to offer conveyor and process belts for every production step in the car manufacturing industry. Our focus will cover all main belt applications such as blanking line belts, stamping line belts, skid conveyors for the body in white section, people mover belts for the fi nal assembly and belts for several car component conveying and processing applications. 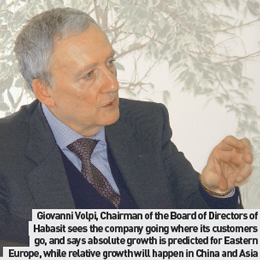 AMS: What environmental concerns are you addressing with your new designs – recycled materials, power saving, ‘friendly’ lubricants and so on?

Giovanni Volpi: Conserving resources and protecting the environment is part of our core values that starts with our own processes and it is an important criterion for the selection of raw materials and design of our products. We use environmentally-friendly materials and consider take into consideration the overall life cycle that addresses source reduction by increasing life time and smart design, lower energy consumption and the possibility of recycling.

AMS: Moving into the Chinese market, which partners will you be working with?

Giovanni Volpi: With an own affiliated company in China, selected distribution partners in that country and other regions plus a dense worldwide network of affiliated Habasit companies in all major automotive producing countries, we are prepared to cooperate with every partner who is active on the Chinese market.