Spanish carmaker Seat has started using two autonomous mobile robots (AMRs) at its plant in Martorell for the picking of parts from its onsite storage warehouses. 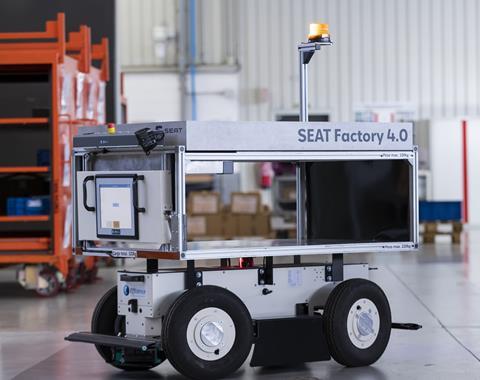 The EffiBOTs, which are made by French robotics expert Effidence, can aid human operatives by carrying parts and material up to 250kg or pulling double that weight.

Seat is the first carmaker in Spain to use the EffiBOTs, also deploying them on two more pilot projects with different applications, though the carmaker did not go into further details on the other projects.

“The use of this technology fits in our automation strategy,” said a spokesperson for Seat. “Once the pilot projects are finished, the deployment of further EffiBOTs will be studied. Our plan is to increase the use of these robots in those processes where they fit the most and [are] aligned with the innovation strategy of the company.”

The robots are programmed to recognise their environment and autonomously map routes by processing 360-degree readings that avoid obstacles. The software enables the robots to follow the person who touches the touchscreen on each robot around the factory without the need for that person to carry a corresponding device. 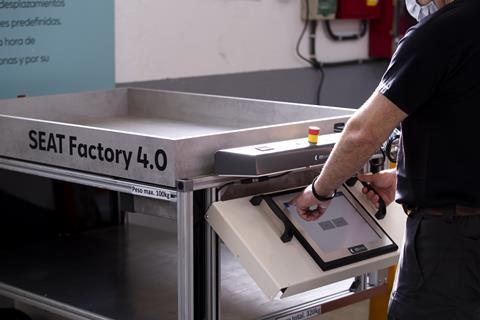 Through the touch screen, operators can order the robot to follow them around

“Autonomous mobile robots place us at the forefront of innovation in the automotive sector,” said Herbert Steiner, Seat’s vice-president for production and logistics. “They’re also a clear example of how robots can collaborate with employees to make their work easier. Their incorporation contributes to driving Industry 4.0 and making us more efficient, flexible, agile and competitive.”

The EffiBots now make up a team of around 20 collaborative robots at the Martorell plant, including those in the assembly areas.

“We have implemented some MRK (Mensch Roboter Kooperation) robots on the assembly line and in logistics processes,” said Seat’s spokesperson. “We have under study further technologies that will be able to help and grow in this cooperation processes.”

Other applications for collaborative robots (cobots) include badging and lettering the Arona and Ibiza models moving along the assembly line while another cobot adjusts the side mouldings of the Arona in the final assembly stage.

The carmaker is also using drones to move parts to lineside over 2km from its parts warehouse in Abrera.