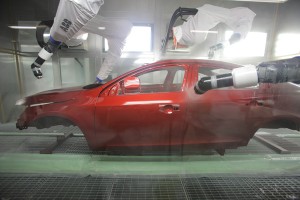 ABB Robotics first established itself in China over 30 years ago and has since manufactured over 30,000 robots in applications serving the entire vehicle production process.

The range of ABB’s business activities in China stretches from R&D and manufacturing to sales and services. In the fold are 19,000 employees, 36 local companies, and an extensive service network that takes in 90 cities.

ABB Robotics automotive technologies, include stamping, BIW, painting and powertrains which serve the entire automobile production process, and are applied by many automakers such as BMW, Volvo and Great Wall Motor, China’s largest SUV and pick-up manufacturer.

VOCs down at Volvo
The Volvo S60L is the first mass-produced model from the Swedish marque’s Chengdu factory. Moreover, Chengdu is Volvo’s first plant outside of Europe since the Swedish company was acquired by Zhejiang Geely Holding Group in 2010. It is also China’s first automobile plant to use ABB’s environmentally friendly, water-based soundproofing and sealing material. This waterborne material was developed over a six-month period and included the construction of a fully automated and sound-proofed gluing station where robots spray the material onto the cars, thereby sealing, soundproofing and waterproofing them. The seals make for a quieter driving experience and at the same time greatly reduce volatile organic compounds, or VOCs.

In recent years, the release of VOCs during manufacturing processes has become a great concern. When operation got underway at Chengdu, the plant’s VOCs were controlled to 25g/m2, greatly surpassing European Union standards, and the company says that waste gas at the plant is 100% recycled.

Working with these more environmentally friendly products is trickier than traditional materials. The waterborne sealant is highly abrasive and sensitive to temperature and pressure. As such, the piping materials and temperature controls are key to the gluing process, which adds to the difficulty of creating a solution.

“The robots are very important in securing product quality in critical processes, so Volvo chose to use them for painting, and noise, vibration and harshness (NVH), which are three major indicators of car quality,” says Dejan Nestorovic, programme manager for manufacturing engineering (paint) at the Volvo Chengdu plant.

The wall-mounted robots take up less floor space in the spraybooths, which in fact saves a lot of energy. The very precise and stable applications provided by the robots keep material consumption under control and fulfil all quality requirements. Waste is also reduced to reduce environmental impacts further.

As of now, ABB has more than 200,000 robots in operation worldwide. Aside from Volvo, the industrial robot supplier is also eyeing other large automakers as possible clients. Early this year, ABB won a new order from BMW for 2,400 robots for hauling, gluing and spot-welding at the German luxury carmaker’s Regensburg and Leipzig factories in Germany, as well as at its Tiexi plant in China. The Shenyang-based Tiexi factory is the most advanced and environmentally friendly of all BMW’s global facilities.

ABB Robotics automotive technologies serve the entire production process, and are applied by the likes of BMW, Volvo and Great Wall Motor
New lines at Great Wall Motor
In December, 2014, ABB announced that it is to provide over 600 industrial robots to Great Wall Motor.

ABB robots will be used in the bodyshop of the second phase of Great Wall Motor’s new SUV body-in-white (BIW) plant located in Xushui, Hebei Province. This is not the first robot order Great Wall Motor has made with ABB in the past years, and is evidence of a strongly renewed partnership between the companies.

Body welding is an important process that directly affects the safety and overall performance of the car body. According to the agreement, ABB will provide Great Wall Motor with several types of industrial robots, including the IRB6640, IRB 7600, and IRB 2600, to create more efficient, reliable, and highly automated welding production lines. ABB’s BIW business unit will also cooperate with Great Wall Motor for its closures and underbody sub assembly lines, which will utilize ABB robotic welding solutions to improve automation and flexibility.

With a load of 235 kg, the IRB6640 is one of ABB’s large robot models. Equipped with arms that have various lengths, it meets the unique needs of different operations, such as handling heavy work pieces, loading and unloading, and spot welding. These will help Great Wall Motor reach the planned annual production capacity of 250,000 units at the second phase of its new Xushui plant, to achieve sustainable, efficient and high-quality automotive manufacturing.

Li Jianhe from Great Wall Motor’s Automation Division said: “Great Wall Motor is continuously improving our automation and production processes to enhance production capacity and ensure high quality to achieve excellence for Chinese self-owned auto brands. ABB’s outstanding robots, flexible solutions, and flawless service fully satisfy Great Wall Motor’s requirements for smart manufacturing and efficient production. Great Wall Motor will continue to work together with ABB to plan more in-depth and innovative collaborations. This has been the key to maintain a great partnership that has sustained for many years.”

Great Wall Motor first collaborated with ABB in 2006, becoming the first self-owned auto brand to cooperate with ABB Robotics in China. ABB robots have been successfully applied in the stamping, welding, painting, and final assembly workshops of Great Wall Motor’s production bases located in Tianjin, Xushui, and others, as well as in its components and parts factories. All these support the production efficiency of Great Wall Motor’s sedans and Haval Series SUVs.

Li Gang, head of ABB China’s robotics business unit said: “We are honoured to once again work with Great Wall Motor. ABB’s leading robotic technology helps customers improve the automation of their vehicle production lines, as well as its overall automotive manufacturing capability. Looking forward, ABB will continue to be committed to providing robots, solutions, and other smart technologies to customers, helping them overcome constraints in energy, manpower, space, and finances in industrial upgrading so we can achieve intelligent upgrading together.”