Mastering the art of machining – with robots and motorcycles

ABB Value Provider, VersaBuilt, based in Boise, Idaho, has developed a universal robotic machine-tending solution that works with any CNC machine. It is affordable for the average machine shop, reduces the total cost of production by up to 50% and has been real-world tested while machining some of the world’s best aftermarket clutches for motorcycles 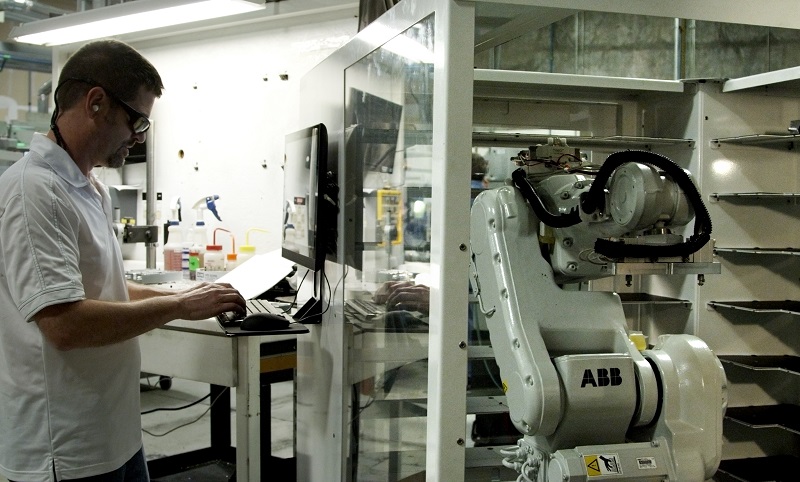 At the age of eight, Al Youngwerth’s parents bought him his first dirt bike, a memory that has loomed large over his entire life. To hear Youngwerth recall it, that moment of revelation led to a passion for motorsports that has endured over the decades – so much so that in 2002 he formed an aftermarket motorcycle clutch company with a vision for changing and improving the way people rode motorcycles.

Today, 13 years later, Rekluse, based in Boise, Idaho, is one of the premiere suppliers of aftermarket motorcycle clutches on the planet, well-known and loved by professionals and enthusiasts alike.

“It all started in my garage,” says Youngwerth, founder of Rekluse and president of VersaBuilt. “I kept my day job as a computer engineer and worked late into the night perfecting the clutch design, with help from Boise State University and a local machine shop. Our first product was called the Z-Start Clutch, and we made it for one model of off-road motorcycle. It kind of became an immediate hit.”

Since then, Rekluse has grown from a garage operation into a fully fledged machine shop, adding the art of CNC manufacturing along the way. The ultimate proof of Rekluse’s success is in the numerous world and national championship titles in multiple racing disciplines that professional riders have won using Rekluse products.

“The clutches we build are a highly technical product,” says Dwayne Dayley, president of Rekluse Motorsports. “Based on real-world results, we’re confident it’s the best clutch in the world. Over time, this quality is what has allowed us to grow quite a bit as an aftermarket supplier of motorcycle clutches – largely based on word-of-mouth.”

The need for flexible production & reduced operating costs
On its current production line, Rekluse makes several varieties of clutches for many different models of motorcycles, both on-road and off-road. Most of the production is in small batches and requires intricate CNC machining operations on solid blocks of aluminium in a vertical CNC with two operations. The most challenging thing about this type of CNC work, according to Youngwerth, is going from the first operation to the second operation, and making sure that the part remains parallel and concentric.

“We looked at a number of ways to improve our production process, starting with lean principles, reducing our set-up times, and reducing our batch sizes,” he says. “But ultimately we recognised that operator labour and operational expense were two of the most significant constraints to growing the business. We researched several different ways to deal with these issues – and robotics was really the only solution that made sense to us.”

Initially, Rekluse engaged with traditional robotics integrators. They received quotes from various companies, some of which were helpful, but began to realise that this traditional sort of robotics integration was cost prohibitive to a high-mix, low-volume shop like theirs.

“By the time these integrators were getting ready to implement the new robotic solution, we would be updating the part and it would all be obsolete,” says Youngwerth. “It just wasn't going to work using the traditional way of integrating robotics. That’s when we decided we could probably do it ourselves.”

Just like Youngwerth did when designing his first clutches, he and his team went out and taught themselves about robotics. To bring the project to reality, they enlisted the help of the experts at House of Design, an ABB Systems Integrator.

Rekluse knew they needed a flexible and affordable system that could universally tend any CNC machine and operate with small batches of mixed parts. After some trial-and-error prototyping, they installed their first in-house designed robotic machine-tending system at the Rekluse factory in 2013. That system has run virtually non-stop since then. They built their second system in early 2014 and today, a year and a half later, they have a total of eight systems running, all of which feature an ABB IRB 140 robot as a centrepiece. Almost every one of these robots is running 24 hours a day.

“What this new flexibility and speed has allowed us to do is dramatically increase our throughput without increasing labour at all,” says Dayley. “And it's turned out to be a good thing for the employees as well. They're not babysitting machines, they're managing machines now. They're not dealing with a single part at a time, they're dealing with batches of parts – and they're really excited about being able to learn how to operate and implement the robots.”

In fact, the production improvements have been staggering. Rekluse is capable of producing parts 24 hours a day without increasing staffing levels. The universal robotic machine-tending equipment can be loaded with a variety of parts and then run for hours. This leads to a 200-400% increase in production capacity and a 60-90% reduction in labour costs per part produced. The machine operators are less stressed, and without stressed workers handling the parts, scrap rates decreased significantly and on-time delivery rates went up.

Altogether, the robotic machine-tending solution that was developed in the Rekluse shop reduced their total cost of production by about 50% – an amazing improvement over purely manual production.

Application to the average CNC shop & the foundation of VersaBuilt
Rather than waiting for somebody else to design a solution for them, or simply throwing in the towel, Rekluse decided they could use their own in-house talent and the ABB robotics expertise at House of Design to develop their own solution – and by all counts it has been incredibly successful. However, at some point in the process it became about much more than simply fixing their own manufacturing woes.

“We recognised that this isn't just a solution for our clutch business, this is something that we can take out to the market and people everywhere can use,” says Youngwerth. “It was pretty much at that moment where I got the idea to go ahead and start pushing forward with VersaBuilt as a separate company.” 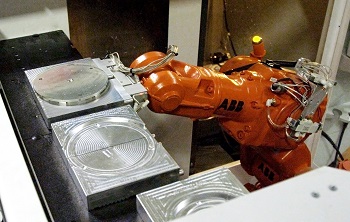 Founded in 2014 as a spin-off from Rekluse, VersaBuilt took all the real-world prototyping they did in their own shop and turned it into the VBX-160 universal machine tender.

The vision for the VBX-160 is to deliver a system that the average CNC machine shop can bring in the door, put in front of a CNC machine, and within a day or two be robotically tending parts in and out of that CNC machine. Given how successful the product has been at Rekluse, Youngwerth believes that every small to medium-sized machine shop in the world could equally benefit from it.

The VBX-160 uses MultiGrip softjaw technology that can be machined to hold almost any part. It is a completely pre-programmed system that requires no custom grippers and no robot programming knowledge.

With up-front and operating costs being a prime concern to small and medium-sized shops, the VBX-160 was designed to be affordable, with the up-front purchase price equating to about $1 per hour over the life of the system. Additionally, the easy set-up means you don’t need to spend additional capital learning how to use a complicated system. It can machine parts through one, two or even three operations without operator intervention, and is capable of rinsing and blowing off excess coolant and chips from a completed part before placing that part on the integrated finish racks.

Typical set-up times are under 15 minutes, including the time it takes to load the VBX-160 full of parts, as opposed to the hours or even days it might take with traditional robotic CNC machine tenders.

Working with ABB Robotics
When Youngwerth began the process of designing his own robotic systems, he searched for the right robotics supplier, using his knowledge of electrical engineering and system design as a guide.

“We needed a robot system with sophisticated capabilities in the controller, and ABB has the best in the business,” he says. “Their technical support is fantastic. When we have had a few minor problems with a robot, they've always been there to get us going right away.”

Recalling a specific service issue when it was time-critical to get a particular machine back up and running in the Rekluse shop, Dayley says, “ABB had a person here within 24 hours – they had to fly him into Boise, Idaho – and they had that machine up and running by noon the day after we discovered we had a problem.”

Now that VersaBuilt is off on its own from Rekluse, the benefits of working with ABB have become even more apparent to Youngwerth.

“ABB has been really helpful in being involved and making sure that as we grow we can be successful,” he says. “We're working with the ABB sales reps and we're working with the ABB technical support centre so that if a customer with a VBX-160 has a problem they can get support not just from VersaBuilt, but from ABB as well – anywhere and at any time.”

Looking to the future
Given their new production capacity, Rekluse have been able to market their product more aggressively and open new avenues for growth. Over the past several years they’ve had to change facilities to accommodate this growth.

“The growth has been tremendous,” says Dayley. “We moved into our current facility three years ago and thought it would last us five years. With the growth we’ve seen over the past couple of years, we could not have fit enough CNCs in the facility to meet the customer demand without VersaBuilt robots.”

“My vision for Rekluse 13 years ago was to change the way people rode motorcycles,” says Youngwerth. “I think we still have a long way to go, but for a lot of motorcyclists we really have changed the way they ride a motorcycle. I would say the vision for VersaBuilt is largely the same. My hope is that in five years’ time we will have made a substantial impact on how CNC manufacturing is done in the United States and, ultimately, around the world.”