Rings around the world 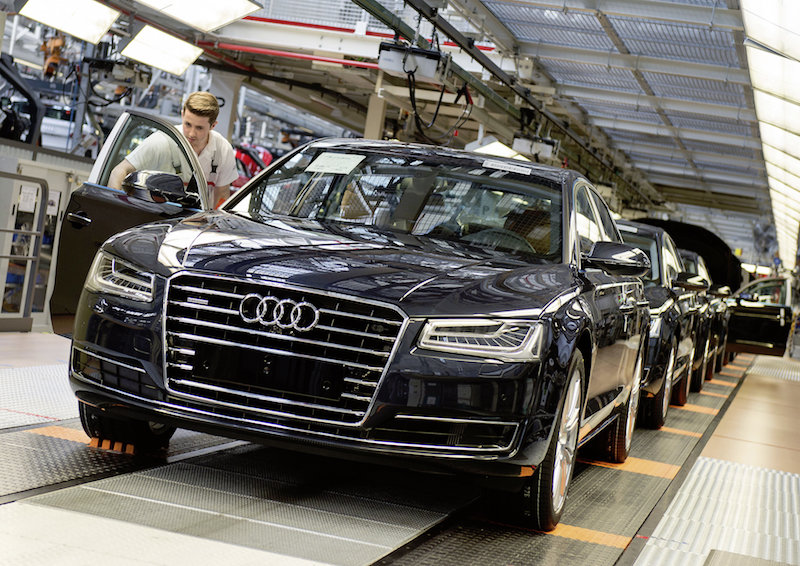 The geographic expansion of Volkswagen’s vehicle production beyond Germany, into Mexico, China, Spain, India, Brazil and South Africa, is now well-established. Meanwhile, parallel expansion at Audi is, with the exception of China, a much more recent phenomenon.

Despite the financial travails that the diesel emissions scandal means for the VW group, Audi wants to intensify its new model development and physical expansion, with record sums to be invested in 2016. Significant progress is already apparent and this review examines what the brand has achieved to date as it looks to reduce its traditional dependence on its German manufacturing operations.

At the Geneva motor show earlier this year, Audi’s CEO Rupert Stadler announced that the company would invest more than €3bn ($3.4bn) in 2016, on 20 new or revised models, and would escalate the electrification and digitisation of its product line-up. The investment includes expansion within Germany, with the major part of the domestic investment allocated to finalising arrangements to make the new Q2 SUV in Ingolstadt and the second generation Q5 in Mexico. Moreover, according to Audi’s finance chief Axel Strotbek, the brand is currently in the midst of “the biggest investment phase in the company’s history”. Critically, investment outside Germany is accelerating too, as discussed below. 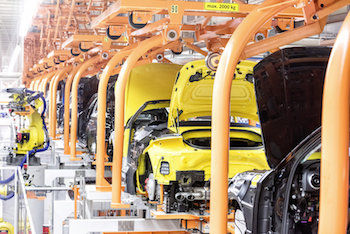 Audi’s first plant outside Germany, Gyor in Hungary has been home to TT production since the 1990s

Investment in 2016 and beyond is being made on the back of record sales in 2015, which were 3.6% up on 2014’s volume, at just over 1.8m vehicles worldwide. Audi has reported record revenue as well, of €58.4bn, albeit with broadly unchanged operating profits of €4.8bn. This was reached after taking into account allowance for so-called “special items”, essentially costs associated with the emissions debacle. In this regard, Audi has stated that the outlay for correcting faults with the four-cylinder TDI engines will rest on the Volkswagen brand’s shoulders, not Audi’s.

Audi’s principal production plants are in Ingolstadt, its home plant north of Munich that concentrates on the A3, A4, A5 and the outgoing Q5, and Neckarsulm, near Stuttgart, which makes the A6, A7, A8 and a small proportion of A4 output. The brand’s first move outside Germany, was to Hungary, now home to the TT and also a major engine plant. Audi has also been established in China, in a joint venture with FAW, since the mid-1990s. More recently, the product range made in Hungary has grown and Audi vehicles are also now produced in Spain and Belgium. Outside Europe, further expansion is underway in China, new operations are on stream in Brazil and production in Mexico is due to begin by the end of 2016.

The expansion of Audi’s manufacturing footprint needs to be seen within the broader context of the VW group’s decision to designate each of its major assembly plants as capable of making a range of vehicles on one of the group’s mega-platforms. For example, the plant in Hungary is an MQB factory meaning full manufacture of the A3 is possible and Q3 production will switch there. Similarly, the Seat plant at Martorell in Barcelona is an MQB Zero plant, focused on B-segment vehicles. This explains why production of the Audi A1 will switch to Spain once the new model comes on stream in 2018.

Audi’s largest SUV, the Q7, is made by Volkswagen in the Bratislava plant alongside its sister vehicle, the Volkswagen Touareg. This arrangement will continue for the foreseeable future.

BelgiumCurrently, the Brussels plant makes the A1, and has done so since the model’s launch. This arrangement will continue until the end of 2017. From early 2018, the replacement model will be made in Spain. The plant is now in the process of being modified to produce the new electric vehicle for Audi, which is expected to be called Q6 e-tron. This will be an SUV crossover, a concept version of which was shown at the 2015 Frankfurt motor show. To support the modifications in the factory, the Belgian government has provided a grant of €100m, with Audi expected to invest close to €600m.

The Q6 e-tron is targeting the increasingly successful all-electric range from Tesla. Audi has clearly decided it needs a dedicated facility to implement its strategy to compete. The vehicle is as important to Audi’s future as the factory is to the region's manufacturing sector; 2,000 jobs at the plant will be saved and, according to the Belgian government, as many as 6,000 jobs in the supply chain and tertiary sector supporting the plant will also be created or protected.

Production of the A1 has been well over 100,000 units a year since the start of production, but output of the more expensive Q6 e-tron will be lower. Initial suggestions are that production will be around 60,000 units a year through to at least 2025 and hopefully beyond. As well as producing the vehicle, the Brussels plant will produce the batteries to power the Q6 e-tron, and quite probably other electric vehicles in the VW group range in due course.

SpainIn order to help the Seat plant at Martorell in Barcelona turn its fortunes around, Audi allocated it production of its Q3 compact SUV, a decision that was facilitated by the lack of available capacity at Audi’s own plants at the time. Production of around 100,000 Q3s per year have helped stabilise Seat’s finances, but manufacture of the next model – which will be made on the MQB platform along with the Audi A3 and TT – will take place at Audi’s plant in Hungary.

As a result, the first examples of the new model come off the Barcelona production line from 2018 just as production of the A1 finishes in Brussels. Martorell is being reconfigured to produce a range of models based on the MQB Zero platform, the version of MQB mega-platform dedicated to B-segment vehicles. Other vehicles made on the MQB Zero platform include the Volkswagen Polo, Seat Ibiza and Skoda Fabia (the first vehicle which was produced on this platform in 2014).

"The brand is currently in the midst of the biggest investment phase in the company’s history" - Axel Strotbek, Audi CFO

HungaryProduction of the first TT at Gyor in the late 1990s represented Audi’s move into the compact roadster/cabrio segments and also its first European production facility outside Germany. The latest, third-generation TT started production in mid-2014. The TT is made on the same line as the A3 cabrio and sedan. More than half a million TT coupes and roadsters have been produced to date. Although full capacity has not yet been reached at Gyor, it is understood that the plant could make up to 300,000 vehicles a year, a level that may well be achieved with the next Q3 and if the A3 range continues to be as successful as it has been in recent years.

MexicoBy the end of 2016, the second generation Q5 SUV will be rolling off the production at Audi’s brand new factory in San Jose Chiapas, in Puebla State. By the time the plant starts production, a total of $1.3bn will have been invested to make 150,000 vehicles a year in what is Audi’s first stand-alone plant for the brand outside Europe (its Chinese operations are joint ventures and the Brazilian plant has a strong Volkswagen involvement). The Puebla state location was chosen partly because of good and improving infrastructure, but also the established links to Volkswagen, the Beetle having been made nearby since the 1960s. 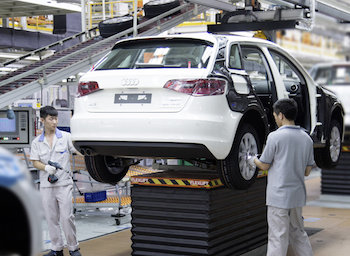 Audi is reportedly considering expanding its Foshan plant, widening of the range of its Chinese-made models

The supply base in the NAFTA region is not as developed as Audi would like, with more than one-third of Q5 components coming from Europe, and much of the rest from across the border in the US. Using suppliers from Europe means that Audi has had to adjust its normal eight-week timing for setting its manufacturing schedule. For Mexico, the production plan has to be fixed 11 weeks in advance to allow for transatlantic shipping.

The San Jose Chiapas facility will be the lead plant for the Q5, taking over this role from Ingolstadt where the first-generation model was made. A second Q5 line already exists in China and the second-generation models will be made there as well. While the Chinese plant will be used to solely supply China, the Mexican plant will link worldwide, with close to 50% of Mexican output destined for Europe, nearly 40% for North America and the balance split between Asia (excluding China), Australia, South Africa and South America. With such a high export ratio beyond North America, the Audi plant will far exceed the figure achieved by other Mexican plants which currently tend to export only around 20% of their output beyond the NAFTA area.

Once up and running, the plant will employ 4,200 workers (600 of whom will have been trained at Audi in Germany). The workforce will produce vehicles with both conventional engines and a plug-in hybrid variant. This will reportedly have an all-electric range of around 30 miles.

BrazilUntil 2006, Audi had produced an early version of the A3 hatchback in Brazil at the Volkswagen plant in Sao Jose dos Pinhais; this programme finished in 2006 due to the economic situation and declining Audi sales in the country. The automotive sector in general and the prospects for premium vehicles in the country have recovered and it is once again attractive for Audi (and indeed Mercedes) to make compact premium models in the country once again.

Audi production in Brazil restarted in September 2015 after a hiatus of nearly a decade, following an investment of 500m Brazilian Reals ($144m). The first model to be made there was the A3 sedan, with production of the Q3 SUV starting in March 2016. By comparison with the Mexican plant, this is a small operation, with initial production capacity of just 26,000 units a year – 16,000 for the A3 and 10,000 for the Q3. Initially at least, production will be for the local market only, although regional exports should not be ruled out in due course.

ChinaAudi has been producing vehicles in China through its association with FAW at the Changchun plant since 1996 when Chinese production of the Audi 200 began. Now Changchun makes the long-wheelbase versions of the A4 and A6 sedans and also the Q3 and Q5 SUVs. The A4L and A6L were the first premium vehicles made in China with long wheelbases, a strategy which Mercedes and BMW have subsequently followed. Similarly, the Q5 was the first premium SUV to be made in China, an approach subsequently followed by Mercedes (GLK) and Jaguar Land Rover (Evoque and Discovery Sport). With just over 490,000 Audis sold in China in 2015 (most of which were made there too), China is actually Audi’s largest single market. In total the Changchun plant made nearly 434,000 Audis in 2015.

In late 2013, with the Changchun plant close to capacity, a second Audi line was opened in China at Foshan in Guangdong Province in the south of the country. Here, the A3 sportback and sedan are produced, again just for the local market. Just over 56,000 vehicles were made in 2015 but capacity at the Foshan plant is much higher. At least 150,000 units a year could be made in its current configuration, although reports have suggested that as many as 300,000 units a year could come off the Foshan lines without significant further investment. The company is reportedly considering expanding this plant to either 450,000 or even 600,000 units per year. Such an expansion would likely involve a widening of the range of Audis to be made in the country, with the forthcoming Q2 small SUV, which will use the same MQB platform as the A3 and Q3, the most likely next model to be made in Foshan.