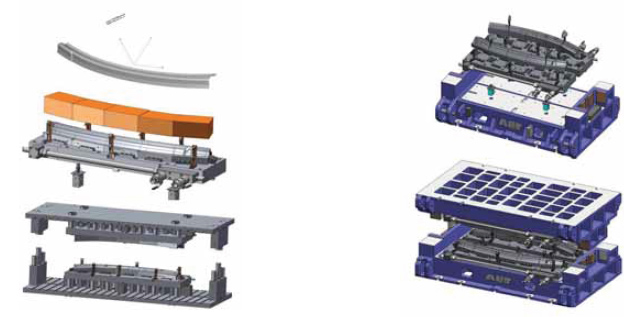 The press shop marks the beginning of the automotive production process. Here, as chassis parts are shaped from precisely cut metal blanks, while corresponding tool sets create body parts such as side frames, doors, bonnets and roofs from sheet metal of various thicknesses.

Material details vary between press shops but generally the die-cut raw material is between 0.7 and 2mm thick, while in 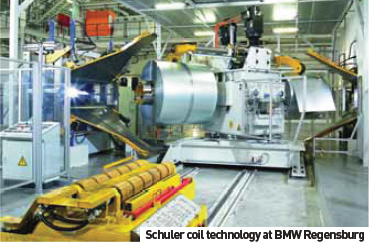 addition to single-material blanks, so-called tailored blanks are also used. These consist of welded metal plates of various types, thicknesses and differing degrees of surface finishing. The basic premise behind shaping these blanks is fairly primitive in concept. Huge punch and die sets are worked relentlessly by mechanical or hydraulic power presses to form panels with unerring repetition. Press performance is the very lifeblood of any automotive plant. According to BMW, a typical chassis press has an overall pressing performance of 8,100 tonnes and processes up to 150,000kg of metal into approximately 13,000 parts per day. To keep production interruptions to a minium, tools are changed automatically in around eight minutes, though many can achieve the changeover in considerably less time. Every stroke of the 54m-long pressing tool at BMW’s 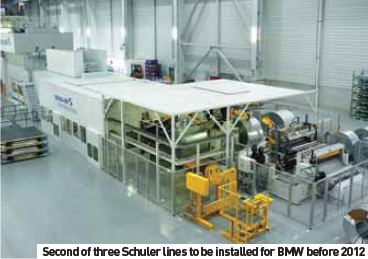 Regensburg plant results in four outer door shells, producing 48 parts per minute. Alternatively, very large parts, such as side frames, can be made in one piece. Manufacturing large metal components from one blank is highly advantageous for vehicle quality: the fewer the individual pieces, the less welding (and corrosion) and the greater the overall precision in terms of fit.

This, though, is not yet a mature technology. Operations within the press shop environment continue to evolve as carmakers look to gain a competitive edge. For instance, the perfect integration of blanking lines, where steel coil and other material is cut to shape, and later automation upstream of the cutting press, can make or break a process looking to achieve improved production efficiencies.

Germany’s leading car manufacturer relies on Schuler’s automation expertise for the production of blanks for body panels and structural parts. Since last year, BMW Regensburg has been using a combination of external pre-cropping station and dual decoiler to optimise its coil preparation process. The blanking line can convert up to 400 metric tonnes of coil per day into blanks. The line includes the world’s first cutting press to feature ServoDirect Technology, designed specifically to process high-strength materials. One component of the blanking line is a dual decoiler for two coils, each weighing up to 35 tonnes. Together with the external pre-cropping station, this helps keep set-up times to a minimum.

At Audi’s Neckarsulm facility, Schuler has developed a different customer-specific solution, an external precropping station and coil storage cart with support rollers being employed here. The setup is designed to allow fast changeovers between the production of aluminum and steel blanks.

The coil storage cart features driven support rollers and an adjustable hold-down roller for threading the coil from above or below. An additional pre-straightening device is integrated into the external coil preparation unit in order to guarantee safe feeding of high-strength material into the main line. Once the coil has been pre-cropped, it is wound back. After moving the coil storage cart to the mandrel centre, the decoiler picks up the lifted coil and moves it into the line. The cut-offs from the start of the coil are made smaller with slitting shears and transported via a waste conveyor to the basement for disposal. 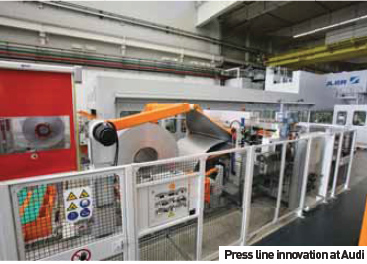 The aim of both BMW and Audi is to optimise machine usage time by reducing process interruptions. Moving the time-intensive cropping of the first coil winding to before the start of the production process makes a major contribution toward achieving this goal. Compared to the use of conventional techniques, both BMW and Audi have reduced coil changeover times by around 60 minutes per day.

Schuler says that the ServoDirect technology at Regensburg enhances the economic efficiency of modern press shops, while also reducing energy consumption by 10%. Unveiled in October, the line is primarily used to produce parts for the BMW Z4. Measuring 85m in length and comprising five servo presses, a blank-loader and an ergonomic part-outfeed unit, BMW can produce parts with dies measuring up to 5m on the servo press lines, which can achieve maximum speeds of 17 strokes per minute. This is the second of three lines that Schuler will deliver to BMW before the end of 2011. At the company’s Leipzig facility, a new servo press line is already producing parts for the BMW X1 and 1-Series models, while production will begin on a third line in Munich by mid-2011.

Press shop operations are being carried out across many emerging economies, and not just China. Recent announcements along these lines include the formation of GM Uzbekistan, a joint venture of GM and Uzbek automaker Uzavtoprom, to build a $37m press shop that is currently under construction. The new facility will increase the carmaker’s annual production of vehicle body panels from 7.3 to 9.7m units. Elsewhere, Hyundai has set a September launch date for a fullyfl edged automotive forge and press unit at its assembly plant in St Petersburg, Russia (see news pages) as part of an overall move to localise production in what it sees as a market with untapped potential.

press lines from Schuler. Specifically, the carmaker is installing two Speedbar press lines for its facility in Chengdu (FAW Volkswagen) and another press line featuring the latest generation of Schuler’s crossbar feeder system for its Nanjing plant (Shanghai Volkswagen). The three new lines will primarily use classic panel die sets for the production of roofs, bonnets, wings, two-out and fourout doors, and complete car side walls.

At Nanjing, the co-ordinated concept involves a lead-off press with a capacity of 2,100 tonnes and five downstream 1,200-tonne presses, with crossbar feeders located between the presses to enable high output volumes. Depending on the operating mode, the line speed can reach up to 15 strokes per minute. The drawing operations of the planned line will be equipped with CNC-controlled, eight-point draw cushions to ensure optimal part quality. Die tryout processes in Nanjing have already commenced.

Press hardening
This is the topic of the moment in press shop circles, where profitability is dependent upon parameters such as heating time, furnace availability, energy consumption and space requirements. ThyssenKrupp has an interest in press hardening/hot stamping, with ThyssenKrupp Sofedit, for example, having successfully designing structural parts and crash-relevant body components for more than 10 years. As more vehicle manufacturers come to rely on directly hot-stamped products, ThyssenKrupp Umformtechnik has addressed this by expanding its production and development capacities at its Ludwigsfelde facility in Germany. Hot stamping permits the production of very strong components with thin walls that add less weight to the vehicle, while complex geometries can be realised and component integration can further reduce the total number of individual parts.