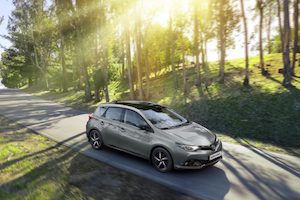 UK - The third generation Auris will be built at Toyota Manufacturing UK's (TMUK) plant in Burnaston, Derbyshire. Established in 1989, the facility was recently upgraded with a £240m (US$330m) investment to house the production of vehicles based on the OEM's new global architecture (TNGA) platform.

"Producing TNGA-based vehicles locally is a key part of our plan to strengthen the global competitiveness of our plants," explained Johan van Zyl, Toyota Motor Europe president and CEO. "As a company, we are doing what we can to secure the competitiveness of our UK operations as a leading manufacturing centre for our European business. With around 85% of our UK vehicle production exported to European markets, continued free and frictionless trade between the UK and Europe will be vital for future success."

Based on the TNGA platform, the Auris comes equipped with a range of different powertrain options, from a 1.2T direct-injection turbocharged petrol engine to a 1.8-litre petrol-electric hybrid. These will be made at Toyota's engine plant in Deeside, North Wales.

For Marvin Cooke, TMUK's managing director, the decision to make the new Auris at Burnaston is "excellent news for TMUK, our local stakeholders and British automotive manufacturing." He believes that it is testament to the company's ability to produce "vehicles and engines of the highest quality, at the best cost."

The announcement comes during a period of uncertainty for other manufacturing facilities across the UK. Questions were raised regarding the future of Ford's Bridgend plant when, in September 2017, Jaguar Land Rover revealed it was terminating a contract to build engines at the facility three months earlier than originally planned. At the start of 2018, Vauxhall said it was cutting 250 at its Ellesmere Port plant.