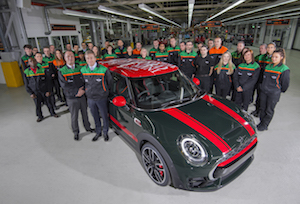 UK – The milestone vehicle was a John Cooper Works Clubman, the first all-wheel drive (AWD) ALL4 model. Around 1,000 Minis are now built at the factory per day – up from 300 in 2001, when production began.

Since 2000, BMW Group has invested £1.75 billion ($2.2 billion) at Oxford, Swindon and Hams Hall. At Oxford, this went towards high-tech paint and body facilities, new final assembly and logistics areas, the Quality and Engineering Centre and the MINIcademy, where apprentices are trained. Swindon produces the body pressings and subassemblies while Hams Hall near Birmingham makes the engines. Bodyshell production, painting and final assembly take place at Oxford, where the 4,500-strong workforce turns out one new Mini roughly every minute.

The models completed at Oxford are three- and five-door Minis, the Mini Clubman and its first AWD All4 model and the high-performance Mini John Cooper Works. BMW reported sales of 340,000 Minis worldwide in 2015, compared with 40,000 in the first year. Eight in ten of the Oxford-made Minis are shipped out of the country; the number of export markets now stands at 110.

Cars have been built at the Oxford site since 1913, starting with the ‘Bullnose’ Morris which was made near the current Mini factory. The classic Mini was launched in 1959 and produced at Oxford until 1968, with a peak output of 94,889 between 1966 and 1977.www.bmw.com