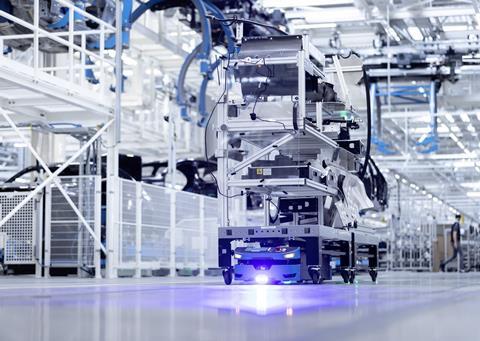 More than 400 AGVs are in operation in Factory 56

The OEM says production efficiency in Factory 56 has increased by 25%, compared to the previous S-Class assembly process. Flexibility has also been an important focus of development at the site, and its claimed that a wide range of new models – from compact cars to SUVs, from conventional to plug-in hybrid to electric drive – can be integrated into series production in a few days. This flexibility is also reflected in the production volumes and material flows, enabling production operations to be adjusted quickly according to demand. The new facility will start producing the new S-Class sedan and long-wheelbase version, followed by the Maybach S-Class and the EQS, all produced on the same line.

This flexible assembly structure is supported by two TecLines that serve to avoid fixed points in the assembly process. They bring together all the complex plant technologies at one point and the traditional production line is replaced by driverless transport systems. So, integrating a new product and incorporating any associated new technical equipment, requires the changing the automated guided vehicle’s (AGV) route. More than 400 AGVs are in operation in Factory 56.

In addition, the assembly of the body to the powertrain utilises a new Fullflex Marriage process. This features several modular stations and allows major conversion work and longer interruptions in production to be avoided.

Factory 56 is also contributing to the company’s sustainability goals with it operating on a CO2-neutral basis from the start. Mercedes says that the total energy requirement is 25% lower than that of other assembly facilities. A roof mounted photovoltaic system provides enough electric power to cover about 30% of the annual power requirements of Factory 56. Some of this power flows into a direct-current network, which will improve the energy efficiency of the assembly shop in the future. It powers technical systems such as ventilation units. A stationary energy bank based on vehicle batteries is also connected to the DC network. With an overall capacity of 1,400 kWh, it acts as a buffer for excess solar power from the photovoltaic system.