Mercedes-Benz is building a new vehicle assembly facility that will act as a blueprint for the future development of all its production sites. Michael Nash reports

Mercedes-Benz has long been a champion of flexible and efficient manufacturing techniques, carrying out numerous projects to test innovative new processes and implementing many of them in production lines across the world. It is now looking to go one step further with the construction of 'Factory 56'.

Blueprint for the future

The recently announced Factory 56 is a new vehicle assembly facility that is being built as an extension to the company's Sindelfingen plant. Described as the "world's most modern car production" facility, it is slated to open in 2020, housing the assembly of the new S-Class as well as the first EV of the Mercedes-Benz EQ brand. The OEM believes it will help to "define a new way of building cars".

"Factory 56 is the blueprint for future production of Mercedes-Benz Cars," Markus Schäfer, Member of the Divisional Board of Mercedes-Benz Cars, Production and Supply Chain, told AMS. "The production concept of facility will allow us to make electric vehicles, robo-taxis and multiple conventional vehicle architectures in the most flexible way, using Industry 4.0 processes and digital tools. The technical content as well as the production concept of Factory 56 is exemplary for our production strategy worldwide."

Collaborative robots, otherwise known as co-bots, will feature heavily in the new facility. Mercedes-Benz has been using these at its production sites for several years after signing an agreement with Kuka back in 2012, and Schäfer believes that they will be crucial to vehicle manufacturing in the future. [sam_ad id=17 codes='true']

"The direct cooperation between people and robots means the cognitive superiority of people is ideally combined with the power, endurance and reliability of robots," he said. "It facilitates different objectives: higher quality, increased productivity, new possibilities for ergonomic and age-conformant work."

Workers will also benefit from using augmented reality tools, virtual assembly solutions and wearables, Schäfer continued. Each of these, he suggested, will help to improve worker productivity.

"Smart solutions make our colleagues’ lives easier. For this reason, assembly workstations within Factory 56 will be fitted with digital equipment. In this process, virtual and real world go hand in hand: modern communication gadgets such as smartwatches and wearables support workers in every step, augmented reality applications make manual everyday tasks easier and paperless systems succeed paper-based processes. This will make us more efficient and most of all more flexible."

Driveless transport systems (DTS) equipped with baskets will also operate in the facility, ferrying the required materials and components to the work stations. These will all be fitted with radio frequency identification technologies (RFID), ensuring that each DTS and component can be digitally tracked.

All of this data will be gathered, along with data from the production lines and individual robots, and will be used for predictive maintenance, allowing management to spot potential faults and identify a fix without needing to stop work. Furthermore, some of the data will be transmitted to the Mercedes me app so that customers purchasing new vehicles can get information regarding production and delivery. 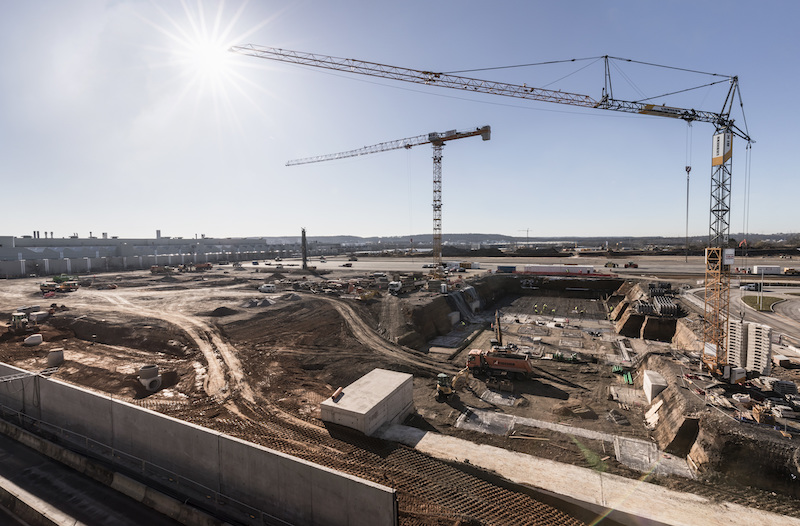 Factory 56 is being built as part of the Sindelfingen plant, and will open in 2020

Schäfer believes that Factory 56 represents a "giant leap on our way to emission-free production". He revealed that Mercedes-Benz intends to reduce the CO2 emissions that are created as a result of vehicle assembly by 75% per vehicle. It will do so by using a photovoltaic system on the roof of the building to feed 5,000 mWh of green electricity into the facility every year. Several other methods will be used to reduce water consumption and waste.

Reducing the CO2 footprint of plants has been an increasingly important area of focus for OEMs, as well as making their vehicles more efficient and eco-friendly. Some, like Audi, have even published lifecycle assessments of individual models to identify the emissions created along each phase of vehicle production.

Looking ahead to the opening of Factory 56, Mercedes-Benz could look to leverage experience gained from current initiatives. In November 2017, the German OEM said it was starting a pilot project called 'Innovation Factory' at its Sindelfingen plant. It is scheduled to last for two years and covers numerous aspects of production, from manufacturing technologies with a low degree of automation to flexible shift models and logistics.

"In the global production network of Mercedes-Benz Cars, maximum flexibility is a key factor for future success," commented Schäfer. "Within the next decade we will therefore enable existing and new production sites to function as so-called full-flex plants and build vehicles independently of architecture and drive systems."