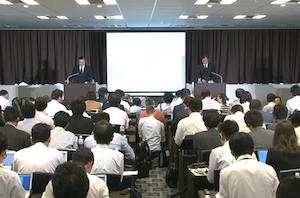 Japan – The two OEMs have signed a basic agreement according to which Nissan will take a 34% stake in Mitsubishi for 237 billion yen ($2.2 billion). The strategic alliance will build on the existing collaboration between the two companies over the past five years.

Nissan and Mitsubishi have agreed to cooperate in areas such as purchasing, common vehicle platforms, technology sharing, joint plant utilisation and growth markets.

Carlos Ghosn, Nissan’s CEO and president, described the deal as a “win-win”, saying it “creates a dynamic new force in the automotive industry that will cooperate intensively, and generate sizeable synergies”. Noting that Nissan will be Mitsubishi’s largest shareholder, he added that the latter will be respected and supported “as they address their challenges” within the enlarged Renault-Nissan Alliance.

Mitsubishi’s CEO and chairman of the board, Osamu Masuko, commented that Nissan has “a deep knowledge of maximising the benefits from alliance partnerships” through a track record of such arrangements. Nissan has had a cross shareholding collaboration with Renault for 17 years, and has also established ties with companies such as Daimler and AvtoVaz. “We will achieve long-term value through deepening our strategic partnership, including sharing resources such as development, as well as joint procurement,” Masuko stated.

The new partnership is subject to the signing of a definitive Alliance agreement, expected by the end of the month, plus a shareholders agreement and regulatory approval. The deal is likely to be finalised by the end of 2016. Mitsubishi will then put forward Nissan nominees as board directors in proportion to voting rights, including a Nissan candidate for chairman of the board.