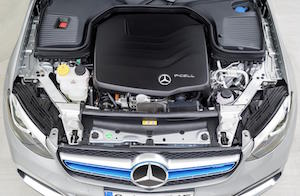 Germany – The OEM presented the vehicle at the Frankfurt Motor Show as “the next milestone on the road to emission-free driving”. The GLC F-Cell features a new fuel-cell system and a lithium battery which serves as an additional energy source for the electric motor. The car will go on sale in the US by late 2019.

The SUV carries 4.4kg of hydrogen and has a range of 437km as a hybrid (49km in battery mode). The fuel-cell system boasts a “compact construction”, according to Ola Källenius, member of the board of management at Daimler with responsibility for Group Research and Mercedes-Benz Cars Development. “Another genuine world-first is the combination with a large, additional lithium-ion battery, which can be conveniently charged using plug-in technology,” he said.

Daimler claims that the fuel-cell system is 40% more efficient and 30% more compact than the B-Class F-Cell introduced in 2010, also featuring 90% less platinum to reduce costs. The smaller system can now be housed entirely in the engine compartment and is fitted to the same mounting points as a conventional engine. The hydrogen is stored in two carbon-fibre-encased tanks which can be refilled in just three minutes, according to Mercedes-Benz. The lithium-ion battery has a gross capacity of 13.8kWh and, through 7.2kW onboard chargers, it can be recharged in around 1.5 hours if full capacity is used, says the OEM.

The fuel-cell stack, described as “the centerpiece of the technology”, was developed together with Ford in the Automotive Fuel Cell Cooperation joint venture in Vancouver, Canada. The nearby Mercedes-Benz Fuel Cell is responsible for the production. The other processes take place in Germany: Daimler Untertürkheim assembles the fuel-cell system; Daimler Mannheim produces the hydrogen tanks; and the lithium-ion battery comes from the wholly owned subsidiary Accumotive in Kamenz. The whole fuel-cell unit and the hydrogen storage system were developed by Daimler subsidiary NuCellSys in Kirchheim.

The GLC F-Cell comes under the EQ Power technology designation. EQ is part of Daimler’s strategy for the mobility of the future, known as ‘CASE’, which represents the “strategic future pillars” of networking (Connected), autonomous driving (Autonomous), flexible use (Shared and Services) and electric drive systems (Electric). Daimler plans to introduce ten battery-electric vehicles by 2022.