The EMO manufacturing equipment trade show takes place in Hannover, Germany from 17-22 September 2007. As a follow-on from the preview in the last issue of AMS, some more exhibitor details are published here

Expanding its market coverage, Swiss manufacturer Tornos will be presenting several new machines at EMO 2007. Among these is the new MultiAlpha 8x20 “Chucker” aimed at the production of extremely complex parts. This machine allows operators to load billets or rough parts instead of bars and to carry out machining both in operation and counteroperation mode. For the production of parts of medium complexity, Tornos will be unveiling two new machines, the Sigma 7 and Sigma 32. These two products complete the current DECO Sigma range.

MAG Industrial Automation Systems will exhibit its products on a 3,500 square metre stand area at EMO 2007. The stand will be big enough to display about 50 machines, ranging from system solutions and turning and milling centers all the way to special machines and service concepts.

The applications are diverse; Asahi has obtained excellent results in the ophthalmic transmission of light through its glass grindings, and for composite material machining (carbon and glass-carbon, for example). It is also a good alternative solution for finishing of bi-material parts (for example, cast iron-aluminium) where the cost ratio/part remains economic.

Autodesk will be exhibiting its entire range of software technologies and the company will be giving regular demonstrations to highlight the latest developments. Autodesk is sharing its stand with its machining partners many of whom will have their own stands too. Companies like Open Mind Technologies with its hyperMILL V9.6 product; GibbsCAM; Delcam with PartMaker Version 8; and CGTech with the new version of VERICUT.

One of the hottest topics in industrial networking these days is Ethernet-based motion control. Protocols run solely on Ethernet, while some use transmission control protocol (TCP) and Internet protocol (IP).

Beckhoff Automation will be demonstrating the EtherCat fieldbus, which communicates in real time to 100 axes in 100 micro-seconds, it has no IP addresses or physical address switches. The bus also can send data packets every 10 microseconds. With EtherCat, each device in the bus system reads an outgoing data packet. This cyclic redundancy check allows end-users to specifically locate a problem area if the data packet has been corrupted.

Bystronic’s EMO 2007 exhibit will be dominated by waterjet cutting. This is close to ‘fast metal removal’ chipping processes and many factories use waterjet cutting as a more economic alternative to milling and other machining processes, but it still attracts far too little attention.

Companies using machining processes have higher costs and longer processing times, as well as the associated reduction in flexibility. Visitors to the Bystronic exhibit will find instructive information on waterjet cutting and a live demonstration of a Byjet system.

CGTech will show the latest version of VERICUT CNC machine simulation and optimisation software at EMO 2007.

The CGTech stand will feature simulations from many of the world’s leading CNC machine tool makers including Mazak, Mori Seiki, Makino, DMG, Hermle, Matsuura and Chiron, focusing on the more complex 5-axis and multi-axis Mill/Turn centres. Virtual machining gallery CDs will be available on request from representatives at the stand.

DMG will have 68 machine tools under power at EMO 2007, covering its extensive range. Many will feature the latest high-speed linear drive technology that has been successful due to the quality of its dynamics and its wear-free axis movement.

Fifteen machines are world premieres. There will also be support for CAD/CAM technology and control systems with financial, service and product support advisors available as well as tool management displays.

From the DMG turning range, six new machines will make their world debut, out of 30 installations which will include universal, vertical, twin spindle, mill/turn centres, sliding head and multi-spindle types. These will be complemented by 31 machining centres, nine of which are new, including five-axis universal, vertical, travelling column and horizontal configurations.

Emag will be represented by all its major operating divisions:

IEMCA will be showing its innovative, flexible bar feeder technology, highlighting the capability of its products to handle small diameters to accommodate the needs of the micro machining market.

The Genius 118 of IEMCA specialises in small diameter bars. This bar feeder is designed for bars from one to 18 mms in diameter and for lengths from 3000 mm to 3500 mm even though the unit itself is short, at 3750 mm. This machine also features extremely fast change over to other diameters because of its simple controls. 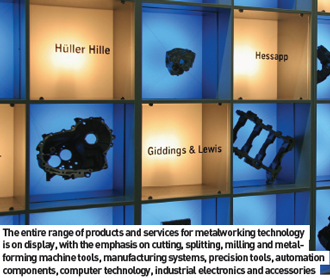 Gibbs and Associates, the developer of GibbsCAM software for programming CNC machine tools, has announced that a new GibbsCAM option, which supports 5-axis simultaneous milling, will be demonstrated at EMO 2007. The new GibbsCAM 5-Axis option extends GibbsCAM’s existing machining capability and provides the user with a complete range of 5-axis simultaneous milling functionality. Special promotional pricing for the GibbsCAM 5-Axis bundle will be announced at EMO. 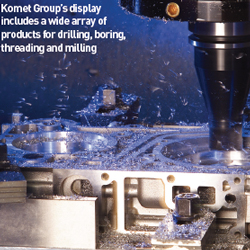 Integrating KOMET, DIHART and JEL, group KOMET will be demonstrating a single range of tools for drilling, boring, threading and milling at EMO 2007.

The aluminium used for casting in the car industry are characterised by a high silicon content, which requires fast abrasive tooling. This is one of the reasons for the development of polycrystalline tools. This cutting material reconciles superior hardness with excellent abrasive wear resistance. It also allows high cutting speeds and feed rates.

Mikron Tool will introduce a new drill line called ‘MiquDrill’. The MiquDrill line, which premieres at EMO 2007, is an entirely new range of products. These drills offer Mikron quality for small and medium batch quantities and minimal holes per workpiece, and are therefore the ideal addition to the CrazyDrill high-performance product line. Three types of drills are available: centre drills in various diameters from 0.5 to 6 mm that already center for the smallest drilling diameters starting at 0.1 mm while simultaneously performing a 90° or 120° chamfer. 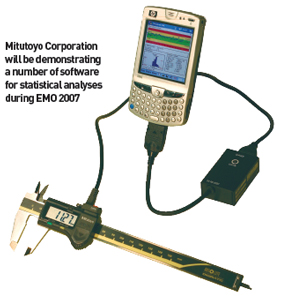 The Pocket ml allows you to draw up tables of figures, X-bars, individual and mobile readings, pre control, histograms, observations, statistics and diagrams. 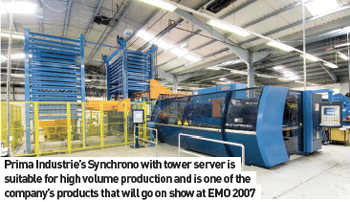 Visitors to Prima Industrie’s stand at the EMO 2007 will be able to see some of the most innovative machines on the market for the processing of both 2D and 3D applications.

At the last EMO the Prima Syncrono was introduced. Two years later, the 1000-holes-per-minute machine reaffirms the superiority of its performance it distinguishes itself as an extremely reliable and efficient tool for high volume production. It is exhibited at EMO in its most common configuration: equipped with its automation system for unmanned production.

At the EMO Syncrono it will be exhibited with TowerServer, the compact, reliable and modular system with a minimum footprint and maximum performances, with an almost unlimited production autonomy.

Renishaw is focusing on speed of manufacture during this year’s show, with a range of new products that will help businesses to reduce process times while maintaining quality in a wide range of machining and measurement applications. 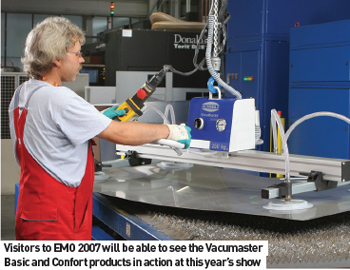 These feature optimised performance in terms of reduced energy consumption, reduction in maintenance costs and purchase price. Safety is also enhanced by their simple mode of operation and the use of a ‘dead man’s catch’ in hand to stop the machine in case of an accident.

Schaeffler Group Industrial, with its brands INA and FAG, will present several new products at EMO 2007.

Schaeffler Group Industrial has developed a bearing support system for rotary tables that helps to achieve a combination of high static rigidity and good vibration damping. This makes it possible to achieve both good surface qualities of the work pieces as well as precise and dimensionally stable machining results.

Workholding and automation specialist Schunk has acquired a stake in HSB Automation, and so has added a sophisticated modular system of electrically driven linear axes to its product range.

Schunk will be demonstrating the HSB modular system which comprises several series of linear axes through selfsupporting axis systems right up to machined profiles for high-precision applications and dual rail systems for high forces and moments.

The linear axes are suitable for practically all handling applications as they are precise enough for demanding tasks, fast enough for highly dynamic applications and flexible enough to ensure that production can be converted at any time rapidly and easily, says the company.

The new FDM 200mc rapid prototyping and manufacturing system from Stratasys will be on display at EMO 2007. It is designed to build parts with feature detail and material strength better than was possible with the company’s previously available entry-level fused deposition modelling (FDM) systems. Replacing the Prodigy Plus system, the FDM 200mc uses new ABSplus material and high-end Insight software with optimized extrusion flow-control parameters to build strong, finely detailed parts from 0.18- and 0.25-mm layers. Soluble-support technology allows for rapid builds with very good surface finish.

ABSplus is engineered to work optimally with the 200mc system, it has thermal characteristics that differ from those of ABS, allowing better flow. It exceeds standard ABS in terms of tensile strength, impact strength, flexural strength, and bonding strength. Parts made of ABSplus can be as much as 67 per cent stronger extending functional testing capabilities.

The new Carl Zeiss Contura G2 measuring machine will be displayed in its three configurations: Contura G2, it is the scanning platform for measuring small items for mediumsized companies.

The new Calypso software takes care of CAD data output and establishes a complete program of measurement, with a few simple mouse clicks.