This year’s Euroblech exhibition, running from 21-25 October in Hanover, Germany, will again be the world’s leading sheet metalworking show. A preview of some of the products and services that will be shown

More than 140 companies, from Italy, Taiwan and the US and everywhere between, will be showing and demonstrating products, services and their latest innovations at Euroblech 2008. 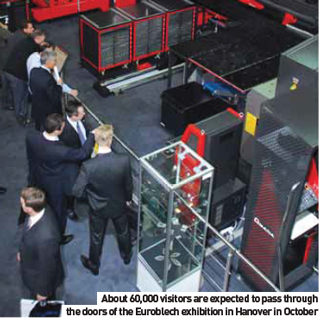 While there may be some interesting product launches and new innovations, it is likely that the expected 60,000 visitors will see advances being made down already-established routes. That said, there will be enough going on in terms of innovation and development of existing technology to keep most people very interested.

“We will definitely be showing tools from our laser cutting range,” says Thorsten Frauenpreiss, Managing Director of Rofin-Sinar Laser (Hall 14, Stand E34). “But we are also seeing people interested in welding and surface treatment, which aren’t typical at Euroblech. Hot-form steel is protected by aluminium and there is growing interest from companies that sell that type of metal on to automakers who are interested in ways of getting the surface layer off. As well as tools to achieve that, laser trimming and finishing will also feature.”

The continuing growth of laser cutting is something unexpected in the market; a few years ago there was talk of the sector being saturated, but sales have seen significant growth up until the past six months. There is an emerging battle between CO2 and solid state laser equipment. Solid state seems to be more directable technology – using optical fibre to deliver the beam – but the shorter wavelength it uses is more dangerous.

If the industry fails to launch an improved product, solidstate lasers will need to be housed in metal enclosures for the foreseeable future – which isn’t a problem for machining centres, which are enclosed already. So the area to watch is involves lower-power CO2 lasers.

“About 97 per cent of all work undertaken in jobshops can be completed with 2.5kW lasers, but there has been a tendency to have more power than needed,” says Frauenpreiss. “Gas consumption is a greater factor than power consumption, as such. While we don’t expect that energy costs will influence the market, people may be interested in less-powerful and more economic systems.”

A full range of products on show
For Schuler (Hall 27, Stand D24), Euroblech 2008 is the first exhibition where the company has been able to exhibit its full range of products, following the integration of Muller Weingarten Group in 2007. From coil to finished product, almost everything will be on display, with video presentations and animation simulations of the larger items in its range, such as its 200-tonne blanking press.

“We have taken an 800m2 booth and are presenting under the slogan ‘The World of Metalworking’,” says Andreas Trost, Marketing Director. The stand will have six areas, ranging from high-speed press lines and compact hydroforming, notching equipment and hot-forming, to an area dedicated to service. “We believe that servo press technology is a hot topic in metal forming and will be well represented at the show. We have sold around 40 systems in the last three years. We now have to prove that our predictions of higher output rates are true and we will have examples of the improvements we have delivered. Schuler ran a part in its own shop that the client had been producing at 25 parts per minute; we put their dies on our servo press and achieved 40 a minute. There is enormous potential in this technology and we continue to learn and develop.” In addition to increased speed, servo technology is claimed to offer greater energy efficiency.

Also promoting low energy use is Dieffenbacher Group (Hall 27, Stand D22), along with Dieffenbacher System- Automation and Karle+Jung Werkzeug- und Maschinenbau. The company's Compress Plus press series uses advanced technology to reduce energy usage, delivering an ‘environmentally-friendly production process’ according to product literature. Joining the Compress Plus will be the X-Tech stamping system, designed as a complete solution for forming large-format, high-grade steel blanks. In the hot-forming area, the company is presenting a new, automated system for forming parts made from press-hardenable steels, such as chassis beams, sills and B-pillars. The co-operative Roboforming project, an innovative robot-based process for prototype and shortrun forming, is part-funded by the Bundesministerium für Bildung und Forschung, with development supported by Forschungszentrum Karlsruhe. Additionally, Karle+Jung will have innovative die systems on the same stand, with applications ranging from aluminium décor, door sill strips, heat exchangers and silencers. 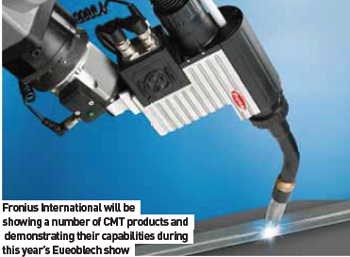 Resistance spot-welding is taken a step further with Delta-Spot, a new system of robot welding tongs that uses a process tape to protect the electrode and form the contact between it and the metal sheets to be joined. The company claims this system allows electrodes to perform 30,000 spot welds before re-dressing.

Also on display will be integrated welding automation systems designed to instantly increase efficiency in applications such as shock absorbers. Its new software system, Fronius Xplorer, has been specially developed to unite all its existing PC software components into a single interface, providing a user-friendly tool for operating, monitoring, documenting and diagnosing networked and automated production areas. Service is a key theme, with Fronius also exhibiting its range of rental and leasing services, as well as repair, calibration and safety inspection of its welding systems.

Also innovating in welding technology is Carl Cloos Schweisstechnik (Hall 13, Stand D21). The new 350-600A Qineo Pulse series features synergycontrolled pulse arc welding and comes as a single unit or with a separate wire drive. The equipment also features a 999-job memory. The Rotrol II robot controller features a new operating interface; developments in cold process for thin-plate welding, laser hybrids and the company’s Tandem process will be demonstrating improved efficiency in robot-supported manufacture. On the software side Cloos will be showing a new remote diagnostic software system, which has been developed for remote maintenance of up to 32 Rotrol controllers, via the internet. CSE and CST laser sensor systems offer non-touch optical measuring for seam tracking, determination of weld positioning and geometry during robotic welding.

Demag Cranes & Components (Hall 16, Stand D06) will show its extended range of chain hoists. DCS-Pro 10 boosts its line of chain hoists, fitted with integrated frequency inverters, up to 2.5 tonnes and has increased no-load and partial-load speeds in the DC-Pro platform by up to 90 per cent. Automatic control at variable speeds is available with E22 or E34 electric travel drives and lifting motion automatically switches over to 'creep' before the equipment reaches its limits. At the other end of the scale, acceleration and braking ramps help prevent significant load sway. Improved monitoring and control mean that gearbox, brake and clutch are maintenance-free for up to 10 years.

Cutting maintenance costs
Demag has been working to cut maintenance and installation costs with the development of its KBK crane construction kit, featuring refinements such as the Bo-Clip retaining device for pins used on its KBK 100, I, II-L and II profile sections, and KBK Aluline 120 and 180. Bo-Clip’s advantage is that it requires no tools for assembly. Removal, too, is greatly simplified, with a tab-lift and pull-out action The company’s X crane suspension system (with two component halves and pivot bearing) is assembled in place, connected by a pin and secured by a clip, precise alignment facilitated prior to final bolting, making for right-firsttime, faster and safer assembly. Regular inspection is also simplified, now reduced to a check of the upper trolley connection; the pivot bearing is maintenance-free. Demag will also show improvements to its foot-mounted hoist lines. Shell Lubricants (Hall 16, Stand C31) has been busy evolving prelube technology. Its Ensis range of corrosion preventatives has been expanded with all-new, micro waxfree technology. Ensis PL 1608 has been introduced in answer to the requirements of steel manufacturers in looking for solutions to traditional problems with application, corrosion and storage, according to Laurent Bernagaud, Shell Metalworking Marketing Manager.

“At the same time, customers in car manufacturing are struggling with the compatibility of prelubes with the array of different metals they use and the different processes these metals are subject to during the manufacturing process,” he says. “Shell Ensis PL 1608 allows for easier application at room temperature, so metal companies can apply direct from the storage tank, freeing up valuable time and reducing energy costs as there is no longer a requirement to heat the prelube.” The micro wax-free technology also reduces the chance of filter blockages, in turn reducing the need for regular cleaning, as well as unplanned maintenance and unscheduled down-time.

The company claims that up to 25 per cent less prelube is needed when using Ensis PL1608. “Car manufacturers gain from the better drawing properties of Shell Ensis PL 1608. The product’s high EP content means that less, and in some cases no, additional oiling for drawing is required. The micro wax-free technology also reduces the ‘dry island’ phenomenon, ensuring that the oil film stays even and stable,” he adds. It also helps to improve multi-metal corrosion protection of finished parts, including coated steel. Siempelkamp Maschinen- und Anlagenbau (Hall 27, Stand B60) will be showing its complete range of specialised machinery for sheet metal forming, from thin sheets up to 300 millimetre. It offers a range of systems that meet the current market demand for the hot-forming of highly-rigid blanks; machinery on display will include new developments in sheet forming and hydroforming.

The main focus of Uddeholm Tooling (Hall 13, Stand C76) will be its Vancron 40 Cr-Mo-W-V-N alloyed cold work tool steel, which boasts very high adhesive wear resistance and galling resistance, good chipping and cracking resistance, and high compressive strength. It also has excellent throughhardening properties, improved dimensional stability in hardening and resistance to tempering back. Applications include blanking and forming, cold extrusion, deep drawing and powder pressing, and as an alternative to surface coating and to hard metal and ferro-TiC, where used to prevent galling. “We will also be demonstrating this steel grade in different product areas, such as steel for powder compacting and tool steel for high strength steel,” says Boo Rundqvist, Communications Manager for Uddeholm.

Automation Presses & Tooling (Hall 27, Stand D43) will be showing its latest developments, including next-generation automation and its concept for press hardening.